The Return of Florence Lawrence
by Adela Rogers St. Johns

This article was originally published in the May 1921 issue of Photoplay Magazine. The image on the cover is a pastel portrait of actress Dorothy Phillips by Rolf Armstrong. The Northernstars Collection acquired this rare copy of the magazine in July 2010. Photoplay merged with Movie Mirror in 1941 and went through a number of incarnations before ceasing publication in 1980. Adela Rogers St. Johns was a journalist, novelist and screenwriter. The images used below were scanned from the original article, which was subtitled The amazing story of a great come-back.

Do you remember her?

After six years, she is going to walk again the path she pioneered.

And now that I have talked to her, I cannot help wondering whether her return is to be a triumph or a tragedy.

She is still a pretty woman. And young quite young.

I cannot tell you why she struck me instantly as being such a sad figure. But when I first saw her, I felt my heart stop and sink a little as it did when I first saw the vacant places in the ranks of the returned, marching regiments of Yankees. 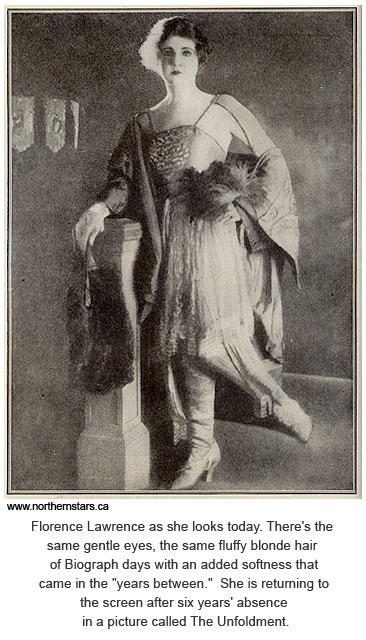 She has in her blue eyes the same look I saw in Sarah Bernhardt`s the last time she came to America — that look of brave, spiritual struggle against overwhelming odds, the look of a woman who knows what it is to fight a losing fight.

Yet she is quite gay, fluffy, blonde, and given to sweet and rather easy laughter. In no wise a gloomy person. She talks cheerfully, entertainingly, and you must read between the lines to patch together the story of her sorrows, but over and over again I felt a lump in my throat.

It is only that she has that soft, constant gentleness of manner, that unfailing kindness of speech and action that I have never seen except in people who have been hurt so much themselves that they wish above everything in the world never to hurt anyone else.

If there is a garden in Florence Lawrence`s face, it is as full of little white crosses as Flanders Fields.

I found her in her room in a small hotel on a side street in Hollywood. It was rather a shabby little room, but its windows looked out over the gray city roofs upon a western sky that nightly showed the glory of a California sunset.

There were flowers in a white pitcher, and a huge box of chocolates and a sweet, pungent smell of oranges from a big basket on the floor beside the couch-bed. On a chair was a cardboard box that frothed with pink silk and lace and ribbons. So it managed somehow to be quite cheerful and feminine in spite of the handicap of its drab wallpaper, and its ugly furniture.

But it was the last room where you would expect to find a motion picture star. Rather it was the room of a woman who has long since learned the soullessness of luxury and whose eyes have seen down the long vista of years yet to be lived, I am sure she would rather have had that sunset window than the most elegant suite at the Alexandria.

I know — as part of the short but crowded history of motion pictures — the story of Florence Lawrence. I know that she was the first motion picture star, the idol of thousands who first answered the lure of the screen. I know that only the brief span of ten or twelve years ago she was “The Biograph Girl,” photographed, sought after, marvelled over, adored. I know that she was the first D.W. Griffith star – the girl who made all the famous two reel pictures for “The Imp.” and for the Victor film company, “in the beginning.” 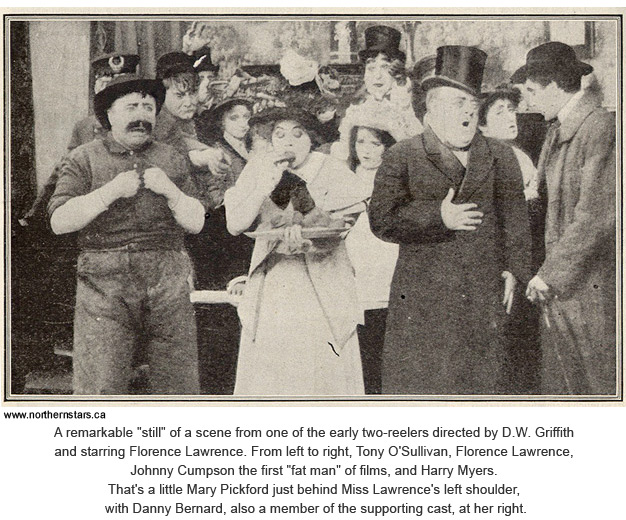 Only the day before I went to see her, that splendid actor and fine director, Jim Kirkwood, said to me, “Florence Lawrence was one of the finest screen actresses that ever lived. If she`s as good now as she was ten years ago you can discount the “advance in motion picture art” and bet she’ll give some of the newcomers a run for their money. She`s a great artist.”

I had never seen her, and pictured a rather worldly woman, returning to the screen after her long absence with some condescension backed securely by millions of St. Louis money, a woman perhaps a bit passe, but assured, self-confident, triumphant.

But I never counted upon the long, harrowing months of illness — brought about by a fall through a burning building while she was making her last picture — nor upon the years of quiet retirement this illness necessitated, nor upon the sad death of her husband, her present strangeness amid changed conditions the mental and physical strain of actually beginning all over again her fight for public favor, and the deep wound that was to cut her on finding how short, how very short, is the memory not only of the public but of fair-weather friends.

If the old, oft-repeated theory is true that one must have lived, suffered, in order to act — then Florence Lawrence returns to the screen with a boundless treasury. 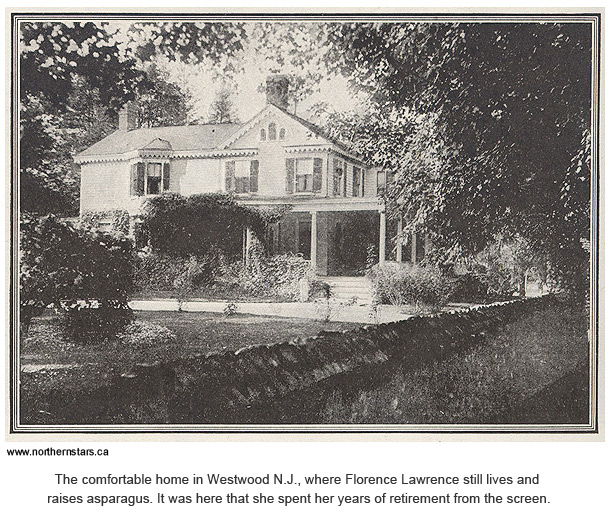 She showed me some poetry that she had written during the long, pain-racked, bed-ridden months — years — that she spent in her beautiful Jersey home — the home that represents her sole reward for those years of pioneer labor. It was not good poetry, but it brought tears to my eyes just the same. Little, simple things called “Alone” and “My Hope” and “Heartbroken.” Things that brought me a vision of a light-hearted, triumphant girl, standing ten years ago in a smaller way where Mary Pickford stands today suddenly stranded in the marshy backwaters of life, striving to express her heartbreak through an unfamiliar medium.

She did not say so, but as we talked I gathered the impression she had not desired to return to the screen. I am also sure she shrank from the tremendous effort, from taking up the struggle against the great, new competition. She is wise, with the simple wisdom of experience, and she realizes that the strongest thing she has to fight is the stubborn, cynical belief of the world expressed in “They never come back.”

“Sometimes,” she said smiling, “I think it is harder to ‘come back’ than to ‘arrive.’ People do not like to have their beliefs disturbed.”

Nor did she tell me why she decided after all to make the venture. But as she talked of her mother, her husband`s death, the years of terrific expense of doctors, nurses, travel, I suspected that the little fortune (for the films had not then reached the swollen fortunes of today) she had accumulated when she took America by storm as the first movie queen had dwindled until it seemed no longer an adequate barrier for two women alone in the world. Then, too, I believe she has a deep, sincere love of her work, that drew her when she found herself physically able to go on with it.

“No one is ever happy unless they have their work to do,” she said with quiet conviction. “I do not think I have forgotten much. They used to say I ‘grew up with the industry.’ But it has outgrown me now. It is like coming back to your old home to find it changed, and all of your family and neighbors moved away. But – screen acting is like swimming. If you once knew how you never forget. I had a great schooling. But it takes a little courage to make the first plunge.”

When you come to think about it, it is rather a brave soul-trying thing. She has returned to a land where once she ruled supreme, where he name was the magic word, to find herself an outsider, her place usurped, her very name forgotten by gatemen at the studios.

Not only the thousands who penned to Florence Lawrence those first fan letters have forgotten her, but people to whom she was kind when her star was in its zenith, people who should have remembered, have ceased to do so. A famous producer who played extras in her company when she was starring was “out” when she called, a great director once her leading man: girls who today have their names in electric lights but who used to borrow her make-up and her gowns, overlooked her return.

It is an old, old story — “The Queen is dead. Love live the Queen.”

She is not bitter. But she is hurt.

As I watched her, in her simple, tasteful blue gown, her lovely, fluffy blonde hair as bright as an ingenue`s, her smiling eyes as blue, her figure firm and erect, it did not seem possible that this girl had already walked through so many of life`s valleys.

For — it makes me smile to think of it — she is only 29. Not really an old lady, you see. In fact, now even a bit younger than some of our highest paid luminaries. She is frail, easily tired, a bit uncertain of herself, but she is still lovely. She has a long scar under her chin from her fall, that adds to the strange pathos of her, but it is no deeper than the one Nazimova carries on her cheek and which the make-up hides so perfectly even from the all-seeing eye of the camera.

She showed me her scrapbooks — fascinating, hoarded history of past glory. As we looked at thousands of pictures which showed her the central figure with such people in her support as Mary Pickford, Owen and Todd Moore, Arthur Johnson, King Baggot, George Loane Tucker, Mack Sennett, Thomas H. Ince – she had the sweetest smile on her lips. But when she turned the pages where column after column sang her praises, where city after city hailed her arrival with eight column heads, where mobs greeted her appearances, I noticed her hand tremble a little.

“It’s a big citadel I’m attacking,” she said. “Times have changed. Today there are thousands besieging it. I know that actors and actresses of world renown have come to the films. The studios now are so wonderful. The studios where we worked with the old cameras, no lights, insufficient props, and buildings. Mr. Griffith made those old two reelers that were the first step up. And I helped him. Every technical handicap was overcome, there are wonderful men in every department and I am amazed, delighted. But — I would not take anything for my experience in working against every handicap. Somehow I feel sure that I am going to succeed. I — I must!”

Her first picture is a story called “The Unfoldment” by George Kerns, head of Producers Pictures Corporation, organized to bring her back to the screen. William Conklin is to be her leading man.

I heard an old stage carpenter, down and out, whom she had looked up and helped in his trouble, say the other day, “She was the best of ’em all. I ain’t seen anybody yet touch what she used to be and I seen most of ’em work. She could make folks lover her, she could.”

They used to call her “the girl with a thousand faces.” If she had a thousand then, at 16-17-20-she ought to have 10,000 now. If she does “come back” — if she can find herself in the new conditions, win back her place in the hearts of the people — what a triumph it will be!