(September 21, 2016 – Vancouver, BC) The winds are cooling and the leaves turning, which means it’s time for Western Canadian film lovers to gear up for diverse and robust festivals that celebrate, illuminate, and stimulate.

The Calgary International Film Festival (CIFF) opens today with a Gala screening of the Canada-Ireland co-production Maudie and runs until October 2. Fostering filmmaker development is a key aspect of this year’s festival. They’ve partnered with BRAVOfact to reward one team of film artists with $50,000 to help bring their concept to fruition. Unlike other awards that are strictly decided by jury, this year’s award will also be based on audience votes. The finished project will screen at the 2017 fest, giving audiences the rare opportunity to witness a project’s full fruition.

Although it’s a relatively new festival, 2016 marks the first year CIFF will be part of the Academy Awards qualifying circuit for short films in the narrative and animated categories. The winner, selected by jury will win $25,000 and qualify for Academy Award consideration. The Head Vanishes by Franck Dion is the only Canadian film in competition this year.

Alberta production has ramped up in recent years and this year’s festival lineup features plenty of locally shot films and a few from local filmmakers that created further afield.

Indie provocateur Bruce McDonald will premiere Weirdos, written by Daniel MacIvor, which is loosely based on the latter’s upbringing in Cape Breton. A celebration of quirkiness and living by one’s own moral code, Weirdos is sure to be a festival hit, complete with a ‘70s soundtrack. McDonald directed the season 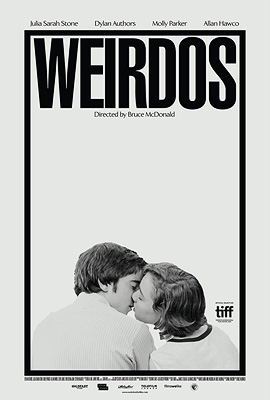 premiere of long running TV series Heartland and will also be on hand as part of Showcase Alberta: Celebrating a Decade of Heartland on October 1.

Hot on the heels of the Calgary festival, Edmonton (September 29-October 8) celebrates all films indie, with a program of 40 features and more than 75 shorts. Focusing on bringing in fresh films, the festival is all about discovery on the edge and films that defy stereotypes.

The opening night film, HeavyWeightPaint, documents the lives of four Brooklyn based (three Canadian born) visual artists, each at different points in their career. It’s an exploration of the rigors of making art in one of the most competitive art markets on the planet.

Studio A: Spotlight on Alberta is a roundup of films shot through “a prairie infused lens” including It’s All in Your Head from Greg Jeffs, Late Harvest by Benjamin Musgrave, and Jaat Sdihltl’lxa: Woman Who Returns, a documentary from director Heather Hatch.

The 41st annual Banff Mountain Film and Book Festival runs from October 29 to October 8. Nestled in the Rockies this festival blends the folksy charm of an arts and crafts sale, with book talks and the film festival.

This year’s event is all about life altering journeys and mind-bending adventures, many with alpine themes. Presented in partnership with the arts hub known as the Banff Centre, it brings together filmmakers and adventurers in the intimate mountain village. The Radical Reels stream is a crowd favourite, featuring breathtaking extreme sports and dizzying acts of gravity defiance.

Later in the fall, (or closer to Christmas) running from November 30-December 4, the tony alpine village of Whistler hosts a dynamic festival, with a focus on workshops and mentorship opportunities. Cinephiles and industry comingle in an upbeat atmosphere with a stunning visual backdrop. It’s also self-described as one of the coolest film festivals.

The Doc Lab is a call to action for social issues documentary makers and for filmmakers eager to hone the art of the pitch, there’s the Powerpitch two-step boot camp and pitch competition.

Deepa Mehta’s latest, Anatomy of Violence is a marquee feature this year and is described as a fictional drama woven around the lives of the six rapists in the tragic event on a New Delhi bus in 2012. Mehta will serve as lead jury member for the WFF Borsos completion, which rewards independent vision, original directorial style and diversity.

There are a number of other, smaller festivals to explore this year which makes the next few months an exciting time for West Coast filmmakers and filmgoers. Click here for links to our listing of festivals in Canada and elsewhere by month.