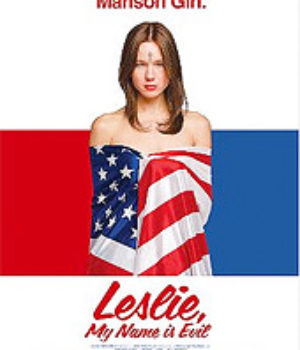 Leslie, My Name is Evil
Review by Glen Russell – Contributor

Leslie, My Name is Evil, is Reginald Harkema’s film loosely based on a real member of the Charles Manson killing clan. I was ready to “tune in, turn on, and drop out” if necessary. I still had my bias about the grizzly, ugly Manson killings. The less I knew the better. Vancouver’s favourite editor, now a director and writer living in Toronto, introduced his latest to us with great zeal and historical referencing. He foot-noted the pioneer cinematographers, the LaLumieres, Robert McKee, and others talking about the wavering line between fantasy and reality. He told us to sit back and prepare for a “trip.”

Harkema said he was interested in the ‘mythology’ around Manson and the times. Leading edge boomers, like me, see many films depicting what we lived through. No mythologies. Was this just another?

Mythologies are ancient grey mixes of fact, fiction, and fantasy from the story tellers. I remember trying to believe in peace and love, and Charles Manson appeared. There is no grey about it, it’s not folk lore. It was real and disturbing: Innocent people slaughtered by some drug crazed cult. They had no story to hear. Could he take me past my own prejudices?

Harkema’s trip does a superb job getting past my bias, and the repulsion. I was never interested in the details, didn’t understand books like Helter Skelter, the fascination with this inhumanity.

Technically, this film is close to perfection reminding me of Northernstar’s resident visionary, Ralph Lucas, telling me, long ago, not to miss The Godfather. I never wanted to see Hollywood glamorizing the underworld, a world repellent to me. He advised: Watch it. It is everything a film should be: Acting, editing, characters, sound track, photography working together.

In the middle of Leslie, My Name is Evil, I remembered Ralph’s words and thought Harkema’s film does the same thing. It absorbs you into a maze of conflicts and choices with blinding lights, or shades of hell.

The editing is clear. It compliments. It is seamless, building story lines filled with philosophical themes. The original music score puts you right there tie-dyed, long-haired, heading to Yasgur’s farm.

The sparse script is epigrammatic, each scene a symbol to ponder. There is no screenwriter listed in the credits. Harkema confessed he was the writer in charge of a process. He said a script is a process and not a one time act. His process works taking you on this trip, pointing out the contradictions of the times: Peace and love shadowed by war and death everywhere.

Each scene becomes a poignant epigram building these contradictions. Each scene is a vivid, blurry, light or dark moment of consciousness. Colours, authentic music complete the trip 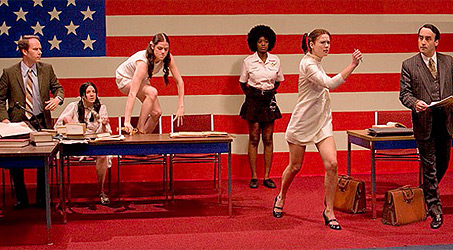 experience. Parallel stories of Leslie the Manson girl (Kristen Hager) and Perry (Gregory Smith) hold you back from ‘freaking out’. The story lines converge at Leslie’s trial. She looks at Perry the juror and Harkema captures you. You forget why you didn’t want to see this movie.

Perry represents the ‘silent majority’ believing in God, the Vietnam War, work, and family. Each scene prior to being called for jury duty is a clean, clear symbol of the choices Perry makes. Things change when he enters the court room.

Leslie’s story is about parental divorce, her abortion, LSD, and finally joining the family of Manson’s hippie cult, the epitome of Leary’s choice to drop out.

Each are prime symbols of a series of choices they make prior to the Manson’s trial. Manson played so well by Ryan Robbins is the final symbol of choice this film leaves you with, disturbing you the most.

Harkema has shown us the context of Manson, images of Vietnam napalm bombing and the My Lai massacres of innocent children and family. For me, his film ends asking us what’s more insane: Manson or a society that orders such killing.

Some might argue the question is wrong: The Manson case is the story of a psychopath, while the Vietnam War is a much more complex story of history, ideology, economics, and more. I wanted to argue with Harkema after, but remembered the award-winning Canadian documentary, The Corporation. It argues capitalism and its government have all the traits of a psychopath.

Also see: The Cast & Crew of Leslie, My Name is Evil.

Glen Russell is a freelance writer based on Vancouver Island, British Columbia.