When Beatrice Lillie was growing up in Toronto and briefly in Belleville, Ontario, people who wanted to become actors had two main gravitational forces pulling at them. One was New York and the other was London, England. Few people thought of Hollywood because, in those days, Hollywood wasn’t even on the map. It was not much more than a small town with orange groves and good weather.

There is little known of Lillie’s very early life except she was born at 68 Dovercourt Road in Toronto, Ontario and attended the Gladstone Avenue Public School when Alexander Muir, the composer of Canada’s unofficial national anthem, better known as “The Maple Leaf Forever,” was the principal. Writing years later in her autobiography, Every Other Inch a Lady, Lillie recalled that the school children predictably changed Alexander Muir into “old daddy Manure.” She also went to school in Belleville, Ontario, but it was her life in Toronto that gave her her start in showbiz.

Lillie was a contemporary of the young Mary Pickford, then still known as Gladys Smith. While Gladys Smith was making a name for herself on stage, Beatrice Lillie sang with her family in an act billed as The Lillie Trio. But it was tough going and the family made the decision to go to England. Just as the Great War was about to begin in 1914, a 20-year-old Lillie made her debut in London`s West End. She was a hit right from the start and was soon a headliner in revue and comedy. She shone in the plays of Noel Coward, and they became close friends. Later when he built a fabulous retreat in the Bahamas, Lillie was a frequent and welcome visitor. It was Coward who said: “Beatrice Lillie appeared in her true colours as a comic genius of the first order.” Thanks to our proximity to the United States and thanks again to the biopic Funny Girl, most Canadians, if polled, would probably name Fanny Brice as “the funniest woman in the world” from that era. Truth is, that expression was wholly owned by Beatrice Lillie, and she was often billed with those very words. It is 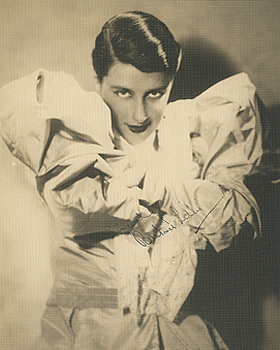 When Bea was “the funniest woman in the world” the world then was still New York and London. Having conquered England, Lillie quickly drew the attention of promoters and producers on the other side of the Atlantic ocean. She opened on Broadway in 1924, 10 years after her first major performance in London. She continued to be an important part of the Great White Way all through the 1920s, 1930s, 1940s and 1950s. In fact, her last appearance was on February 27, 1965 when the musical comedy High Spirits ended a run after almost 11 months. At the time, Lillie was 71 years of age.

People with that magnitude of talent are often able to stretch across several stages. Few were then or are today, as successful as Lillie. In addition to her stage work she enjoyed a terrific recording career. While some said her singing style was, “utterly mad” and others credited her vocal ability to “drunken fairies (who had) hit her over the head with a golden hammer,” Bea Lillie could sing, and her record sales remained strong throughout most of her life. Of course, the other stage Lillie tried was the movies.

Her film output was slim as her commitments to musical theatre often prevented her from making movies. For example, in the 1930s, Hollywood`s Golden Era, Lillie was on-stage in New York almost non-stop from 1931`s The Third Little Show to 1939`s Set to Music. Just two of six productions that spanned the entire decade. As a result she made only one movie in all that time. Dr. Rhythm was released in 1938. Her screen debut had come just two years after her first appearance on broadway when she starred in the silent movie, Exit Smiling in 1926. That`s her on the left. With the moustache. While few in number almost all of her on-screen jaunts remain memorable. In fact, Exit Smiling turns up on a regular basis at silent cinema festivals around the world.

Her last film was Thoroughly Modern Millie in 1967. It could have been titled Thoroughly Modern Lillie. She was 73 at the time but showed no real signs of slowing down. Her wit remained sharp and her comedic sense strong. Despite that, there were no new stage or film projects in sight, and so she turned to writing her memories. Every Other Inch a Lady, as it was titled, was published in 1973 and generally poked fun at her own life, which included a marriage into the aristocracy. While she was always Bea Lillie, she could also sometimes be, Lady Peel. She died in England just a few months before her 95th birthday.

Not forgotten at home, to mark what would have been the 100th anniversary of her birth in 1984, the Parkdale Clinic at 1115 Queen Street West in Toronto was renamed in her honour. While it would have been more fitting perhaps to name a theatre, it is probable that Lady Peel, or Beatrice Lillie, would have found some humour in such an honour.

This biography is Copyright © 2002 by Ralph Lucas and may not be reproduced without written permission. Click here for more information about copyright. The photos used in this biography were scanned from originals in the Northernstars Collection.