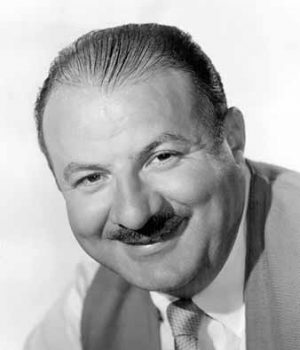 (April 19, 2021 – Toronto, ON) Broadway’s Lou Jacobi started out in life as Louis Harold Jacobovitch. He grew up on Brunswick Avenue in Toronto and was not quite a teenager when he made his debut on stage at the Princess Theatre, which today if any of the once famous building remains, lies beneath the city’s multi-lane University Avenue near King Street.

The Princess began as the Academy of Music in 1880 and later changed to the more regal title of Princess. It was the first theatre in Toronto of any size that offered live theatre and it was here in 1924 that the boy who would become Lou Jacobi played the role of a violin prodigy in a play titled The Rabbi and the Priest.

Jacobi did, in fact, play the violin, then and for most of his life. He also dabbled in painting. As he grew he moved in various directions within the performing community. For example he worked as a drama director for Toronto’s Young Men’s Hebrew Association, he did stand-up comedy at weddings and bachelor parties and in the late 1940s he became part of the musical-comedy revue, Spring Thaw.

Being Canadian it was easy for him to look to England for future opportunities and in the early 1950s he moved to London. Among his early credits is a role in the American musicals Guys and Dolls and Pal Joey. He was part of a Royal Command Performance at the London Palladium in 1952 and made his film debut in England appearing in the 1953 film Is Your Honeymoon Really Necessary? Based on Vivian Tidmarsh’s 1944 West End hit play, the British comedy starred England’s blond sex symbol, Diana Dors and Jacobi played one of the more minor characters, Captain Noakes.

But eventually the call of the United States was too great to resist and he made his way to New York and Broadway. He made his debut in 1955 in the Garson Kanin directed The Diary of Anne Frank at the Cort Theatre, playing the role of Mr. Van Daan, a less-than-noble occupant of the Amsterdam attic where the Franks were hiding. It ran from October 5, 1955 to June 22, 1957. Two-and-a-half years later, Jacobi was one of only three cast members to also appear in the 1959 film version. On Broadway in 1959, credited as “Also Starring,” Jacobi was in Paddy Chayefsky’s The Tenth Man, directed by Tyrone Guthrie at the Booth Theatre. The play is set in an Orthodox Synagogue and he played the role of Schlissel. It ran from November 5, 1959 to May 13, 1961. Jacobi followed that with another long run play from then up-and-coming playwright Neil Simon. Come Blow Your Horn ran from February 22, 1961 to October 6 1962. An interesting side note is an exhibition of Lou Jacobi’s pastels was presented in the promenade of the Brooks Atkinson Theatre. Those are only three of his 10 Broadway credits, his last performance coming 23 years after his first when he starred in the very short run of Cheaters at the Biltmore Theatre. It ran a little under a month from January 15, 1978 to February 11, 1978.

Often referred to as a “scene-stealing” actor and comedian, his film and stage career usually saw him playing comic ethnic characters, but he was known for his serious dramatic roles as well. And while he sometimes showed up in plays critics didn’t like, his work was usually singled out for praise. An example of that was his role in the 1970 play Norman, Is That You? Renowned New York Times critic Clive Barnes clearly didn’t like it but mentioned Lou Jacobi as “a very funny actor who hardly needs lines to make his point. He has a face of sublime weariness and the manner of a man who has seen everything, done nothing and is now only worried about his heartburn.”

He continued his stage career off-off-off Broadway including a role in Clifford Odets’s Rocket to the Moon, in 1983 in Connecticut. He was 74 by then and received very good reviews. He also recorded a few comedy albums with titles like Al Tijuana and his Jewish Brass, Howliday Inn and Bunnicula: A Rabbit-Tale of Mystery. On television he was the star of the CBS comedy series, Ivan the Terrible, in which he played a Russian headwaiter living with nine other people in a cramped Moscow apartment and he was a regular on The Dean Martin Show on NBC in the early 1970s.

As you can see on our filmography page, Lou Jacobi made about two dozen feature films and made-for-television movies. His supporting roles included the philosophical bartender in Irma la Douce (1963), the young hero’s unsophisticated uncle in My Favorite Year (1982), a lucky florist in the Dudley Moore comedy Arthur (1981) and a middle-aged transvestite who gets caught with his hostess’s clothes on in Woody Allen’s Everything You Always Wanted to Know About Sex (1972). In Barry Levinson’s 1990 drama Avalon, he was one of four Russian brothers trying to build a future in Baltimore in the early 20th century.

Lou Jacobi’s career on stage and in film spanned five decades. He had been in declining health his last few years and was 95 when he died at his home in Manhattan.