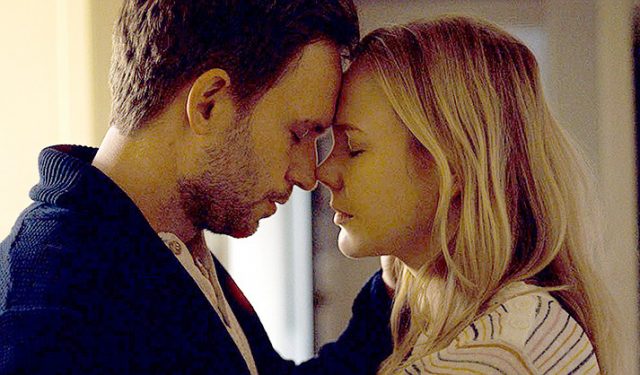 November 17, 2022 – Toronto, ON) There is an impressive roster of RomCan to choose from. For me, Away from Her, Take this Waltz, Still Mine, Below Her Mouth, Barney’s Version (sort of), and And the Birds Rained Down stand out. I approach romantic dramas with an it’s-not you, it’s me cynicism. I’m open to the possibility of being swept away—after all, I’ve been adequately surprised by more than a few. Dramatic romance can do that.

I was concerned because where Wet Bum’s characters have a relatable awkwardness to them, the characters in The Swearing Jar seem consciously designed to sell the characters as being incidentally irresistible. The casual direction, the playful montages, and the off-the-cuff delivery of lines all create a glimpse into the lives of its lead characters, albeit it’s a Facebook version of a glance. 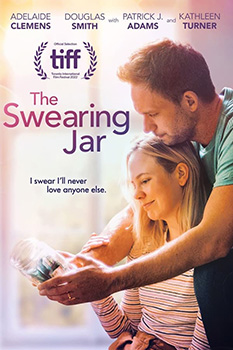 The film’s three leads, Adelaide Clemens, Patrick J. Adams, and Douglas Smith, put in great performances. For the first while—perhaps the first third of the film—there is a fear those performances have no place to go.

Anyone familiar with Kate Hewlitt’s play, The Swearing Jar (Hewlitt is also the film’s screenwriter) knows that the story, which must have played so wonderfully live, is an essential set-up for the final two-thirds of the film. It is a film worth the time it takes to tell the whole story.

The story opens with a young couple, Carey (Clemens) and Simon (Adams), celebrating the news that they are to become parents. The thing is, Simon has information too, and it’s written on a little strip of paper, but when Carey announces her pregnancy, Simon secretly returns the note to his pocket. And here’s where it stays until the final act.

Watching Kathleen Turner in the secondary role of Bev, Simon’s problematic mother, is a pleasure. Bev is remarkable because she is precisely what the other characters aspire to be and perhaps what they might become given enough time. Bev is broken but healed, outspoken but reserved, and sorry but without regrets. Turner embodies each of those contradictions, creating some of the film’s best moments.

While Bev is confronted with being a grandmother and the painful memory of her failed marriage and maternal responsibilities, Carey and Simon happily prepare for the baby’s arrival, including implementing a swear jar to help curb their colourful language. It’s all for the baby.

But Carey meets Owen (Adams), a charming bookstore clerk. Owen’s charm can seem cloying if you haven’t shaken off the cynicism by this point. You might also wonder why Owen looks a lot like the guy playing guitar with Carey on stage. The similarities can be confusing until you recognize that The Swearing Jar does not pay much attention to timelines. This is not a romance told in chronological order. The effect is a payoff that invites you to reconsider scenes you’ve seen before.

Watch the trailer and learn more about the cast and crew of The Swearing Jar.

Thom Ernst is a Toronto based film critic and writer and an active member of the (TFCA) Toronto Film Critics’ Association. His work has appeared in various publications including Playback Magazine, The Toronto Star, and The National Post. He is known to CBC Radio listeners for his lively contributions to Fresh Air, Metro Morning, and CBC Syndication as well as appearing on-air for CTV News Channel and The Agenda with Steve Paikin. He was host, interviewer and producer of televisions’ longest running movie program Saturday Night at the Movies. Currently he can be heard interviewing Canadian filmmakers on the Kingston Canadian Film Festival podcast, Rewind, Fast-Forward