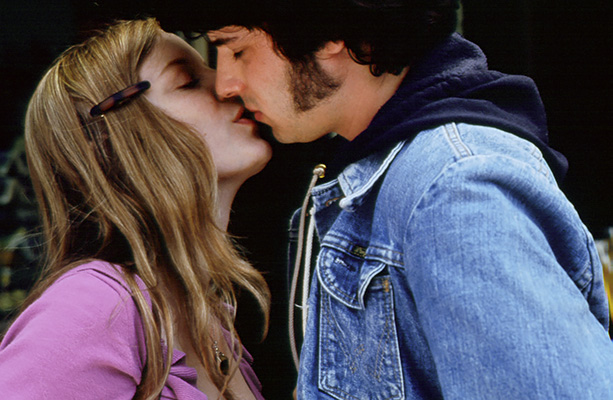 (March 2004 – Toronto, ON) When 28–year–old Shane Bradley’s dream girl, Margaret (Sarah Polley), takes off to London with her ex–boyfriend, the loss propels him toward his other big passion, gambling. He hangs out non–stop with his buddies, Robbie, Vittorio and Andrew, compulsive bettors who agree with Shane’s assessment, “If you like sex better than gambling, you’re not gambling right.”

One night, Shane (Luke Kirby) blunders into a winning streak in an underground casino. Flush with a gambler’s high he tempts fate, bets more than he can afford, and loses a bundle. Bill, a nasty loan shark, lends Shane the cash he needs to cover his losses, while making it clear that if the money isn’t repaid on time, Shane will suffer deeply. Then opportunity knocks when Shane and his penny–ante friends decide to go into the bookmaking business. 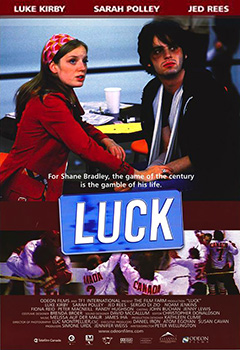 It’s 1972, and the Canada/Russia hockey series obsessing the country has been playing out in the background of Shane’s story. It jumps into the foreground when Shane and his friends make a killing by putting their capital on the Russians. “I was betting,” he laments, “against the foundation of my country’s faith.” However, with about a minute to go in the legendary final game, Canada scores the winning goal and takes the series. On the street, Bill, wearing a Team Canada shirt, does a weird victory dance, but before his henchmen can put Shane in a wheelchair Bill dies of a heart attack and Shane is saved. Dazed, he wanders off into the crowd of hockey fans celebrating the fabulous victory.

Serious gambling pictures like Robert Rossen’s The Hustler (1961), Norman Jewison’s The Cincinnati Kid (1963), Karel Reisz’s The Gambler (1974), P.T. Anderson’s Hard Eight (1997), Mike Hodges’s Croupier (1998) and Richard Kwietniowski’s Owning Mahowny (2003) are all fascinated by the world of casinos, racetracks, pool halls and backroom card games. But they also use that world to relate existential fables about confronting destiny and defining one’s nature. On a spiritual level, gambling films imply a yearning for amazing grace that is hot–wired into human DNA.

For the protagonist of Luck, the risky betting that almost brings him down is an avenue toward fulfilling his vision of himself. Shane is convinced that greatness awaits him. However, as written and directed by Peter Wellington (Joe’s So Mean to Josephine) and played by Luke Kirby (Mambo Italiano), the character seems more boyishly bewildered than hungry for fame, fortune, creative accomplishment or whatever form his “greatness” is supposed to take.

Shane claims that he’s an aspiring writer, but we don’t see much evidence of talent or determination. His ambition comes through mainly in a tendency to make gambling moves that exceed his grasp, and the movie does succeed at conveying the rush he gets from embracing risk. Otherwise, Shane is given to cute exclamations such as “I’m kind of really, badly in love with her,” his mode of expressing romantic yearning. We are definitely back in the 1970s, when the uncertain anti–heroes of Canadian films screwed up and failed to get the girl.

Also recalling a typical English–language Canadian movie from that era is Luck’s somewhat rough–hewn, desaturated look, which Wellington and his crew took pains to create. The picture seems driven, at least partly, by an impulse to contradict the more epicene tendencies of this country’s art–house filmmaking. Luck is not a precisely composed view of spaced–out urban neurotics with rarified hang–ups. Shane has to deal with his own existential crisis, but he also must confront down–to–earth issues. In fact, his need for cash is more compelling, and believable, than his attempt to transcend his limitations.

With the Canada/Russia hockey matchup, Wellington links Shane’s crisis to the real–life saga of a mythic hockey series. Team Canada was the underdog because it lacked muscle and no one, until the last minute, realized how strong the Russians were. The country shut down during the showdown game, which was probably the most emotional and politically charged event in Canadian sports history. Anxious fans watched their heroes risk humiliation in a quest for victory on the international stage. Through this historical allusion, Wellington posits Shane as a symbolic Canuck, a beautiful loser who sometimes comes out on top but just barely. Like Pierre Elliott Trudeau, a 1970s icon who messed up a one–of–a–kind relationship with his Margaret, Shane can be his own worst enemy.

Despite it limitations, Luck is a watchable, at times engrossing movie. Robbie (Noam Jenkins), Vittorio (Sergio Di Zio) and Andrew (Jed Rees) are vivid if somewhat schematic characters. The standout is Rees’s manic gambling junkie who will bet on anything that moves. He steals every scene he is in. As for Sarah Polley, who plays Margaret, she’s a talented, poised actor but too often she seems to be showing off her cleverness, building a character out of ticks and quirks instead of real conviction. By comparison, when you watch Scarlett Johansson in Lost in Translation or Rachel Griffiths in Six Feet Under, you feel such an intimate connection with their characters that you fall in and out of love with them. 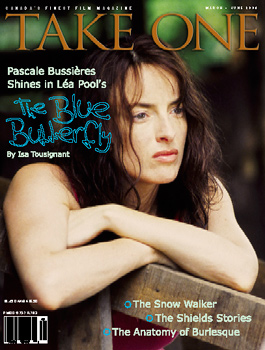 In Luck, which offers Polley not much more than a cameo role, she is, nevertheless, very effective in one of the picture’s best scenes, an aborted seduction that leads Shane to favour gambling over everything else. Margaret’s face says that she’s both attracted to him and wary of his attempt to cross the line between friendship and lovers’ intimacy. Wellington, whose Joe’s So Mean to Josephine took the 1996 Claude Jutra Award at the Genies and played well at Sundance, shows subtlety and control in scenes like this. He and executive producers Atom Egoyan, Susan Cavan and Daniel Iron spin the wheel with Luck and sometimes they score. But the winnings could have been greater.

This uncredited review was first published in Issue 45 (March 2004) of Take One Magazine. Northernstars acquired the digital rights of Take One in 2007.

It Was 40 Years Ago Today