Gisele MacKenzie started out in life as Marie Marguerite Louise Gisele LaFleche. Once known as “Canada’s first lady of song,” she was the daughter of a Winnipeg doctor and a musically-gifted mother. She was playing piano at two years old and went on to play violin and sing. In fact, her first public performance was on the violin when she gave a recital at the Royal Alexandra Hotel in Winnipeg when she was just 12 years old. MacKenzie later moved to Toronto to study at the Royal Conservatory of Music. She was entertaining troops during the Second World War when she met, and later married, the bandleader Robert Shuttleworth. They had a son and a daughter but the marriage didn’t last. Later she married businessman Robert Klein, but that marriage also ended in divorce.

It was while performing with the Robert Shuttleworth band that MacKenzie went from being a musician to a singer. And it only happened because her violin was stolen. Shuttleworth had encouraged her to sing, but she wanted a career as a violinist. That’s when fate intervened.

With the war over and life returning to normal, CBC Radio offered her a radio show in 1946. Back in those days, radio shows could be almost any length and Meet Gisele, as it as called, ran for 15 minutes each Monday, Wednesday and Friday. It was four years later, in 1951, that her career received a huge break. Bob Crosby, the brother of singing and movie star Bing Crosby, heard her CBC show and offered her a spot on his own show which was heard throughout the United States and produced out of Hollywood. 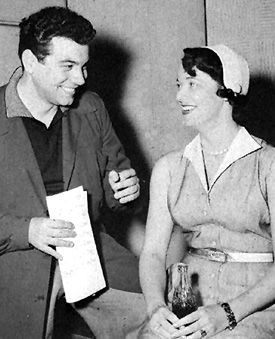 That’s when her last name changed to MacKenzie. It was her father’s middle name and his mother’s maiden name and so it became her last name too. She remained a regular on Crosby’s Club 15 for two years. She also turned up as a featured singer on The Mario Lanza Show (pictured) and became the most frequent guest on his show which ended in August of 1952. MacKenze next joined comedian Jack Benny on tour in 1952 and 1953.

With the growth of television beginning in the early 1950s, it didn’t take long for producers to notice the young and talented Canadian. She had been in the United States for a very short time when she landed a recording contract with Capitol Records, and appeared in a number of Las Vegas shows. Television was next and in 1953 she joined the weekly television show Your Hit Parade. Instead of having the original singers perform, the show featured staff singers, like MacKenzie, who would sing the top seven songs each week. An interesting piece of trivia is the fact that Gisele MacKenzie was the only vocalist on the show to have her own song among the top seven. Titled Hard to Get, it stayed on the 1955 hit parade for 16 weeks. MacKenzie stayed with the show until 1957.

In addition to Your Hit Parade, she was a regular on The Jack Benny Show beginning in 1955. It was this legend of the entertainment business who helped her get her own show on NBC. The Gisele MacKenzie Show ran for six months in 1957.
Even before she had her own show, MacKenzie had taken leading roles in summer stock productions of musicals like South Pacific (1955), Annie Get Your Gun (1956), The King and I (1957), and in other musicals in the 1960s. She returned to television in 1963, appearing as a regular on The Sid Caesar Show.

In later years MacKenzie performed widely in musical theatre in such shows as Mame, Gypsy, The Sound of Music and Hello, Dolly! She made a television comeback of sorts in the 1980s with guest appearances on MacGyver and Murder She Wrote, Crazy Like a Fox and Boy Meets World. She also acted in the movie of Edgar Allan Poe’s The Oval Portrait. In 1996 she wrote an anthem to the city of Los Angeles called My City, L.A., which became popular in the city.

Gisele MacKenzie died at the age of 76 of colon cancer on September 5th, 2003.

This biography is Copyright © 2007 by Ralph Lucas and may not be reproduced without prior written consent. For more information about copyright, click here.