Home News The Making of The Legend of Sarila 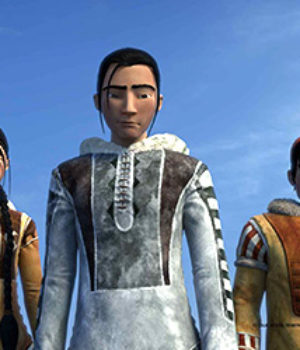 (February 21, 2013 – Toronto, Ontario) When the animated feature The Legend of Sarila opens in Québec on March 1st it will be making film history in Canada. According to the producers behind the film, 10th Avenue Films and Carpe Diem, it is only the third feature-length animated film to be made in Canada and it is the very first to be made in 3D. A project that began as a script in 2001 has taken a long time to finally come to the screen and it features the voices of some of the country’s best including Christopher Plummer and Geneviève Bujold. Northernstars Publisher, Ralph Lucas, asked Eric Clément of Montréal’s Modus FX and VFX supervisor for Sarila about how the film was made.

RL – I understand from 10th Avenue, one of the production companies behind The Legend of Sarila, that they had the script in 2001. Now, 12 years later, it’s about to be released. How did Modus FX become involved? Did you go after the project or did 10th Avenue come to you?

Once 10th Avenue had teamed up with Carpe Diem to produce Sarila, they contacted us in 2010. Together we worked on a plan to make the project happen and jumped into the adventure.

RL – What year did Modus FX begin to work on this film?

strong>RL – This is, I believe, only the third feature-length animated film to be made in Canada, and the very first animated 3D movie?

Sarila is the first feature-length animated 3D movie produced in Canada. I don’t know whether there have been other animated features before this.

RL – Modus FX is renowned for its work in visual effects, which usually involves changing or improving existing non-animated film footage. Have you done animation work before? Or was this a new venture for the company?

While the main focus of Modus is on high-end visual effects, we like to take on animation projects like this one. Our first foray into this was with March of the Dinosaurs, a 90-minute, fully animated movie that came out in 2011. We designed several creatures and environments for that movie and, along the way, developed our animation expertise.

RL – You must have added a significant number of new people. Where did they come from?

The core team of twelve artists from various divisions was already in place, but for an animated feature film like Sarila we needed to expand every department. The animation lead, along with HR, managed to create his own team of sixteen people, bringing in a mix of seniors and young talented animators from all around the world.

RL – I don’t know very much about the animation process and I’m particularly interested in the work involved when we see the characters speak. Do you animate those scenes to a pre-recorded voice track? Or do the actors need to match the animation, much like when they do ADR or looping sessions?

We received the pre-recorded voice track. The animation workflow started with a blocking pass, in which the animator showed the layout of a shot based on the storyboard. Most of the time this pass was “chunky” to allow quick back-and-forth review. From the director’s 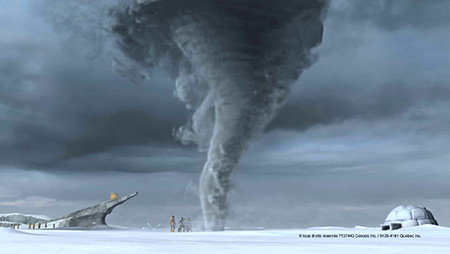 feedback, we then generated a more elaborate animation pass, making it more smooth and realistic by adding details, such as the body weight of a character walking or jumping.

Once approved, the animators moved to the last part of the animation pipeline, called the finagling stage. This was where lip-synching and the simulation of clothing and hair were done. The voice tracks were imported into the animation software (Softimage) to allow the artist to animate and listen to the track line at the same time. The emotion and expression of a character needed to be taken into consideration from the beginning because there is a lot of body language that accompanies facial expressions. Having said this, it was important to lock the overall animation before going into these details. Animators were often using mirrors and cameras to experiment and mimic the dialogue so they could study what the facial expressions actually looked like.

RL– I would think that one of the major differences between non-animated and animated films, is that in a regular movie a director may call for many different takes, a few different camera set-ups, actors may flub their lines…. but with traditional animation, the storyboard becomes the Bible and there’s very little room for change or experimenting. Is that true with computer generated animation? Is it easier to manipulate camera angles, easier to try something different despite the storyboard?

With VFX the challenge is to make it photoreal, that is to say, invisible to the audience. Animation allows for much more creativity because you don’t have to conform to a plate. The art director from Sarila had a unique signature, which looks like watercolour painting. He wanted us to help him express his way of seeing the story, and find a way to break the straight 3D renders into something more stylised. That was a nice challenge.

CG permits a lot of flexibility, but the trick is that the budget limits the time you can experiment on a shot. The storyboard is indeed the Bible. We made sure the workflow was flexible in the beginning of the process (e.g., layout stage, animation blocking), but as the shots were moving into the pipeline it became more and more difficult to make major changes. We had to respect as much as possible the workflow of the director, Nancy Florence Savard, and make sure that approvals were done at every step along the way.

RL – Once the film is done, is the 3D effect just that… an effect? Or is there far more involved in creating the left-eye, right-eye versions of each frame?

With compositing software like Nuke, it was fairly easy to create the left/right comp. The challenge was to make the best stereo comp out of every shot. Traditional 2D tricks like adding a last-minute matte painted background or adding some live footage of snow falling in the foreground will not work in stereo. The stereoscopic approach needed to be carefully planned. For instance, a 2D matte painting needed to be projected on a multi-layering of rough geometry through the z-axis to get it to work properly in stereo. 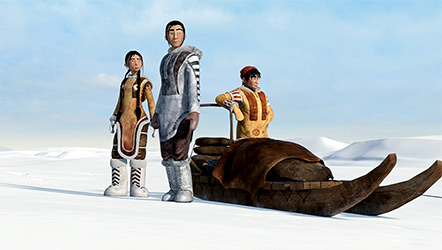 The stereo process began at the layout stage: from the storyboard, the team generated a scene with the proper camera, characters and environment. The animation department did a blocking pass to confirm the overall action of the scene. From there, layout did a second pass to adjust and optimize the stereo cameras. The resulting output was in grey shading, i.e., with no texture or proper lighting, and this was reviewed for stereo approval. After a few months of animation, lighting and compositing (in mono), we were finally ready to review the result in stereo.

RL – Usually in visual effects work, you make your name by creating something so realistic no one notices…. this is different. Everyone gets to see every frame of your work. That must be very gratifying?

It is always magical to see the movies that are out there and then be able to do one of our own. To take the challenge of looking at drawings and concepts and turn them into something real is a great source of motivation. To go from concepts to 3D assets, from animation blocking to final animation with voice over, and finally, to see it all comped and cut properly – it’s very impressive.

There aren’t many places where I could have done that. I was thrilled to be part of this and I look forward to doing it again soon!

RL – Finally, what’s next from Modus FX? And, is there another animated feature in the works?

We’re working on three feature films right now and have a few in development. The animation world has a very high level of expectation. Our animation department has shown what it’s capable of and our pipeline will only continue to improve.

Back to the Cast & Crew of The Legend of Sarila.

Ralph Lucas is the Founder and Publisher of Northernstars. He began reviewing movies when he was in radio in Montreal in the mid-1970s.