If anyone was ever out of place in a business that relies on people who want to be famous it was Ontario-born Paul Massie. In those supposedly halcyon days of klieg lights and whiskey shots, Massie would become drinking buddies with Peter O’Toole and Richard Harris, a friend of Trevor Howard and he got to work with the legendary John Gielgud. But in 1966, Paul Massie turned his back on all that, upping sticks for warmer climes and a position as a professor in the theatre department at the University of South Florida. He remained there for 30 years, himself becoming an institution on local stages both as an actor and director, according to the St. Petersberg Times. Many of his memorable roles came from productions at USF, including A Little Night Music, Who`s Afraid of Virginia Woolf?, Orphans, Waiting for Godot, Equus and The Tempest.

From various accounts of that time he loved what he was doing and his students became devoted followers and fans. When it was learned in 2010 that he had cancer, they created a page for him on Facebook and three months after his passing they organized a memorial not in a church, but in a theatre. He had left Florida several years before, returning to Canada and settling at the end of a peninsula on Nova Scotia’s South Shore.

He was the son of a Baptist minister and began life as Arthur Dickinson Massé. Although he grew up in Canada, studied acting and made his first movie here, he spent most of his 16-year acting career in England. Other than a 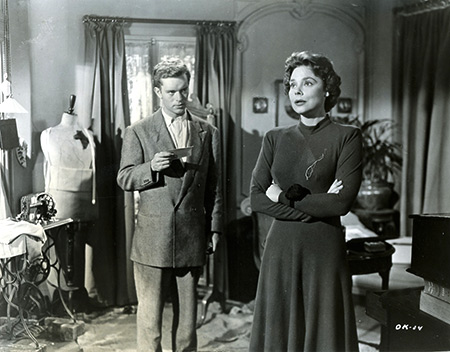 few appearances on a very young CBC during those first golden years of television, the only film he made in Canada was his first, Philip Leacock`s High Tide at Noon (1957). It was a Rank Organization melodrama shot in Nova Scotia, which is perhaps the reason he returned there at the end of his life instead of his home city of St. Catharines, Ontario. His CBC televised dramas include Spring Song in 1964, directed by Paul Almond, and Ibsen’s A Doll’s House in 1966 which costarred Geneviève Bujold. He also appeared on stage at Ontario’s Stratford Festival.

His work in High Tide at Noon was nothing more than a bit part, but he made an impression on the producers, who invited him to England.He changed his stage name at the request of the J. Arthur Rank studio. His very next film was in a costarring role opposite Lillian Gish in the drama Orders to Kill (pictured on the right). Massie played a young American bomber pilot sent to Nazi-occupied Paris to kill a man believed to be betraying his colleagues in the French resistance. After getting to know his intended victim, he begins to have doubts about his mission. Massie received a British Academy Award for the 1958 production.

In 1959, Massie appeared in Basil Deardon’s Sapphire, as the possibly racist fiance of a murdered girl, and in Anthony Asquith`s Libel, as an ex-PoW who accuses a baronet (Dirk Bogarde), claiming to have been in the same camp, of being an impostor. In 1960 he played the the title roles in The Two Faces of Dr Jekyll, a Hammer Horror version of the Robert Louis Stevenson classic. This time, the bearded, 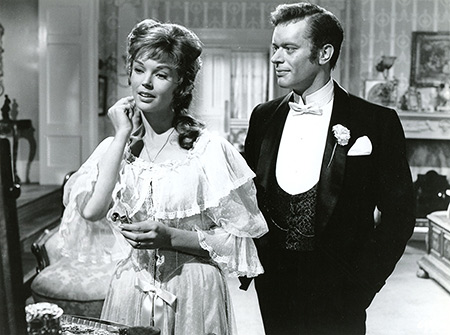 In 1961 he changed direction appearing as the straight man against the comedic antics of Tony Hancock in The Rebel. It was a film about two artists eking out a living in a Paris attic. Hancock is a fraud and supposed leader of the school of the New Infantilism, Massie is a real artist and their scenes together are brilliant Hancock comedy.

If he knew the end of his career was approaching he never mentioned it. Just five years after working with Hancock, Massie more or less walked away. He made a handful of appearances on a few television series and traveled to Canada to work, as mentioned above, with the CBC. His series work included an appearance in an episode of the highly popular The Avengers in 1965 and in the Canadian series, Seaway in 1966. That was the same year he started his new career in Florida, although he didn’t officially become a faculty member until about 1974. He later became a full professor, and was named professor emeritus after his retirement in 1996. Quoted in the Tampa Bay Times, Nancy Cole, who worked with Massie at the university for 20 years said, “He was a world-class artist who came to USF and embraced us. For students to be able to share the stage with an actor of his talent and experience and to see how he prepares, that’s a profound gift to the cast and to the audience,” she said. “He was a hero.”

After his retirement, Massie made Eagle Head Point, Nova Scotia his home. After he died a friend he had made there confirmed that the once dashing actor never really talked about why he walked away from fame and fortune. “I suspect its’ because he’s really uncomfortable with the whole stardom thing and that fits with what I’ve come to know of him since. He was not comfortable promoting himself.”

Paul Massie was 78 when he died at Queens General Hospital in Liverpool, Nova Scotia on June 8th, 2011, after being increasingly ill in his home on Eagle Head Point for some months.

This biography is Copyright © 2013 by Ralph Lucas and may not be copied without prior written permission. For more information about copyright, click here. All of the images used on this page were scanned from originals in the Northernstars Collection.