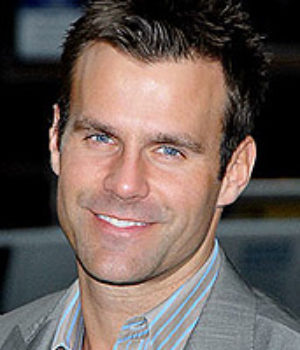 Although Cameron Arthur Mathison was born in Sarnia, Ontario, he grew up in Thornhill, a community just north of Toronto, Ontario where he attended Thornlea High School. A serious student who did particularly well in math and science, his striking good looks allowed him to occasionally think about a career as an actor. Smart enough to know that there`s a real tough world beyond acting, he decided to continue his studies and moved to Montréal to attend McGill University. After graduating, with a degree in civil engineering, he started to work as a model. His thinking at the time was to earn some extra cash while he tried to decide what to do with the rest of his life. That decision was four years in the future.

Mathison finally made the giant leap and decided to go after his dream to be an actor. Just as he had in school and university, he became a serous student of his craft and he took acting classes. As his confidence grew he began to go out for auditions and not surprisingly, he began to land a few roles. In his brief career so far he has appeared with Mike Myers and Neve Campbell in 54, landed the role of Rick Eastman in the made-for-television movie, Any Mother`s Son, and picked up a role in the TV movie The Defenders. He is best known for his role as Ryan Lavery in the TV soap opera, All My Children.

But with the rise of so-called reality, or unscripted, television, which really started to explode in the summer of 2000, it became increasingly difficult for networks to justify the suddenly old-fashioned soap operas. Many, like The Guiding Light, could trace their beginnings back to the heyday of radio in the 1930s and 40s. Space on major networks became scarce and the rise of specialty channels siphoned away badly needed advertising dollars as the big networks saw their audiences fragment into smaller and smaller shares of the advertising pie. The specialty channels, without huge commitments for news or sports programming were able to concentrate on creating programs that quickly established a much higher level of quality than daytime, live-to-tape programs could ever hope to achieve. One by one the venerable soaps began to disappear. The Guiding Light, which began on radio in 1937 then moved to television in 1952, went off the air in 2009 after an incredible 57 years on television alone. It was announced in 2011 that All My Children would cease production in the fall. It had started in 1970. Cameron Mathison had joined the cast in 1998 and had become one of its most enduring actors. When the series ended he had played the role of Ryan Lavery in 1040 episodes of the program.

This mini-biography is Copyright © 2012 by Northernstars.ca and may not be used without prior written permission. Click here for more information about Copyright.