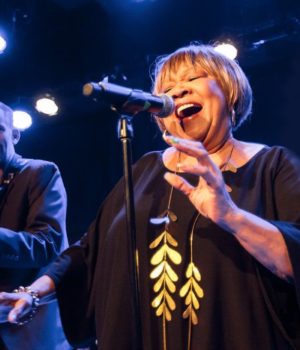 (November 5, 2015 – Toronto, ON) – Back in April of this year in our preview of Canadian films screening at Hot Docs, we said this about the documentary, MAVIS!: “Another, lighter documentary is the Canada-US co-production titled Mavis. That’s Mavis as in Mavis Staples and the once legendary Staple Singers. If you think of documentaries as being heavy think pieces or exposés this is anything but. In fact the feeling of joy and happiness throughout this doc will have you tapping your feet. Some excellent clips of an early Bob Dylan are just one of several highlights in a film and story that deserves your attention.”

MAVIS! will be back in Toronto, playing at the Bloor Hot Docs Cinema and opening on Friday, November 13.

MAVIS! is the first documentary on this gospel/soul music legend and civil rights icon. Beginning in the gospel church, Her music spans from the freedom songs of the ‘60s and hits like “I’ll Take You There”, to funked-up collaborations with Prince and her recent albums with Wilco’s Jeff Tweedy. Over the course of her unrivaled career, Mavis has stayed true to her roots, kept her family close and reinvented herself as a solo artist at the age of 65. The film mixes dynamic live performances, rarely-seen archival footage and conversations with musical legends Bonnie Raitt, Levon Helm, Chuck D, Sharon Jones, the afore-mentioned Bob Dylan and many more. It also reveals the struggles and successes of her journey. At 75, Mavis is making the most vital music of her career and her message of love and equality is needed now more than ever.

“I’ve been touring since 1954, and I’ve been to all kinds of festivals, but I don’t think I was at a film festival until my movie screened in Austin,” Said Staples. “That was something else. I cried all my mascara off. And I am so grateful, knowing all these young people – whole new generations – they want to hear my songs and my family’s story and what I have to say… I’m really blessed.”

Director Jessica Edwards has a BFA in Cinema from Montreal’s Concordia University and a Masters Degree in Documentary Studies from The New School in New York City.