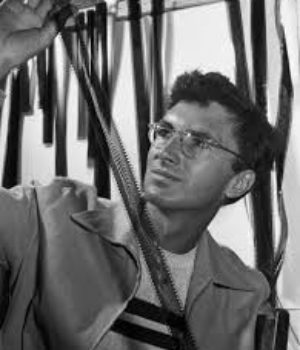 When asked how he would be remembered in 100 years, Norman McLaren replied: “I might be classed as an animated filmmaker or maybe there is a little subclass called the experimental filmmaker, in which I would prefer to be classed and would like to see myself mentioned.”

Canada’s certified cinematic genius – whether you choose to label him experimental, animated or simply brilliant – has finally been honoured with a box set of seven DVDs that includes not only all the films he made for the National Film Board of Canada during his 43 years with the Board, but those he made in Great Britain and the United States as well. Also included are many of his tests and unfinished films, 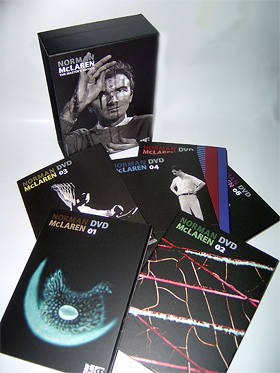 short documentaries on his collaborates such as Evelyn Lambart and René Jodoin, and audio clips and interviews in which he comments on his films and artistic process. It’s a handsome package, and at a suggested retail price of $89.95 in Canada, reasonable when you consider the wealth of material it contains.

Born in Stirling, Scotland, in 1914, McLaren`s interest in filmmaking began early in life when he saw the films of the great Russian masters Sergei Eisentein and Vsevolod Pudovkin. A strong interest in socialism led him to join the Communist Party and serve in Spain on the side of the Republicans during the Civil War. He then moved to New York City, where he found commercial work until a fellow Scot and friend, John Grierson, encouraged McLaren to join him at the fledgling NFB for “$40 a week” and complete artistic freedom. His first films for the Board were the hand-drawn Dots and Loops (1940) and Boogie-Doodle (1940). Toward the end of 1942, he was asked to put together a team of gifted young animators to create a fully staffed animation department.

From Mail Early in 1941 to Narcissus, his final film, in 1983, McLaren redefined the rules of animation and created a body of work unmatched in the entire history of cinema. Some of the highlights of his career include the Oscar-nominated Begone Dull Care (1949), with a soundtrack provided by Canadian jazz great Oscar Peterson, Around Is Around and Now Is the Time (1951), early experiments in 3-D made with Lambart, the pixilated Neighbours, his personal favourite and winner of an Oscar in 1952, Blinkity Blank (1955), the winner of the Palme d’Or for Best Short at Cannes, and three other Oscar nominees: A Chairy Tale (1957), made with Claude Jutra, the collaborative Christmas Cracker (1963) and the exquisitely beautiful Pas de deux (1968). McLaren passed away in 1987, and it has taken the NFB nearly 20 years to put together this collection, but better late than never. Earlier this year, McLaren was given a retrospective at the Cannes Film Festival and the top price for animation was named in his honour. The retrospective travelled the Canadian fall-festival route, and there is a move to get it in the U.S. next year.

Norman McLaren always worked with entire surface of the film stock, often placing significant graphic elements at the very edges of the frame. Previous video transfers of his films conformed to the conventional television screens, so anything outside the usual viewing area was excluded. For this Master’s Edition, overseen by Donald McWilliams, a former collaborator and biographer of McLaren, the animated image is surrounded by a black border so that the entire image can be seen.

And to see the films of Norman McLaren is to see the works of a gifted innovator, meticulous craftsman and one of the world’s greatest animators who came to represent the very best the Film Board had to offer in its glory days.