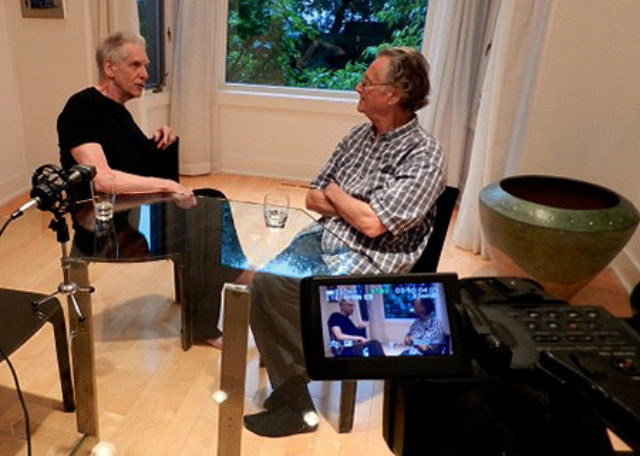 Me, the Bees and Cancer
Review by Wyndham Wise, Associate Editor

(June 20, 2013 – Toronto, ON) John Board is veteran Canadian 1st AD/associate producer with an impressive resume that dates back to 1970 and Paul Almond’s Act of the Heart. He has worked with David Cronenberg on seven of his films (The Brood, Videodrome, The Dead Zone, The Fly, Dead Ringers, Naked Lunch and M. Butterfly), and his other credits include the Oscar-nominated Atlantic City and the Genie-winning The Grey Fox. 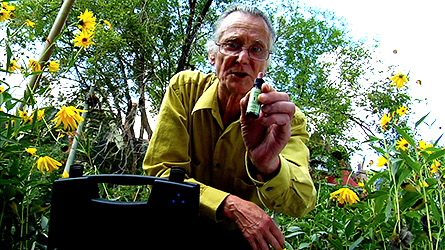 Board is also a passionate advocate of homeopathic medicine, and in 2002 he compiled something call he calls his ‘Hollywood Survival Kit,’ a handy briefcase full of remedies, herbs and ointments, which he claims, enthusiastically and repeatedly, has something to cure anything. In fact, Board is so convinced the first scene in his documentary Me, the Bees and Cancer (which opens tomorrow, June 21 at the Royal in Toronto) is devoted to a rap song that he wrote and performs in front of his house – sort of an advertisement in rap extoling the virtues of his ‘Survival Kit.’

Two years ago Board was diagnosed with Hodgkin’s lymphoma, a fairly common form of cancer resulting in the growth of a tumor in his right armpit. With a grand of seed money from the $1,000 Feature Film Challenge, he sought to document his own cancer alternative – bee sting or venom therapy. The result is an intensely personal and at times hard-to-watch documentary.

Apitherapy is the use of beehive products, including honey, pollen, propolis, royal jelly and venom in the treatment of arthritis, bursitis, tendonitis and other aliments. The anti-viral and bactericidal properties of propolis have been used on wounds throughout the centuries,and melittin, found in bee venom, has a powerful anti-inflammatory action, albeit in minute quantities. Alexander the Great is said to have used apithearpy, and its use can be traced back to the times of the Pharaohs in ancient Egypt. 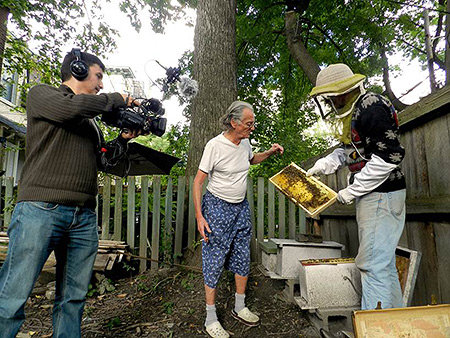 The scientific community is skeptical about effectiveness of apitherapy, and tests on lab mice have shown no significant results confirming its healing properties. However, such facts do not bother Mr. Board. As my father usedto say, don’t let the facts get in the way of a good argument. Board makes it abundantly clear in several rants against the medical establishment that he has no faith in modern medicine, which he accuses of a massive cover up when it comes to the healing power homeopathic medicine. Instead, he turned to venom therapy (there are two clinics in Toronto) as a means of breaking down the tumor and forcing it into remission. Cheerfully he self-administers up to 20 bee stings a day, a routine that’s as fascinating as it is painful to watch. 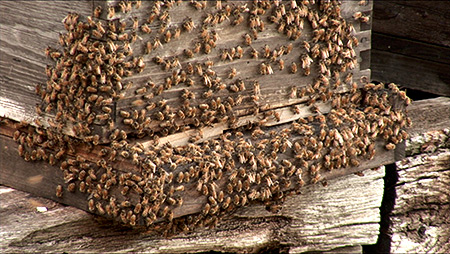 The doc is rough and ready, which is not surprising given its tiny budget, and was filmed in July 2012. At times it appears to have been shot on a digital phone, and it has the feel and appearance of a home movie as Board talks to his old buddy David Cronenberg about the nature of addiction, visits an apitherapy clinc, tends to his own bee hives in the back garden and pontificates endlessly on the power of natural healing. With his long, shaggy hair, the intense enthusiasm of a true believer and mismatched clothing – he appears to wearing polka-dotted pajama bottoms tucked into white socks while performing the rap – Board comes across as an aging, hippy snake oil salesman.

Quite frankly, the cure doesn’t work. He’s forced to admit after 75 painful minutes that he doesn’t feel any better after months of venom treatment but he doesn’t feel any worse. Hardly a ringing endorsement; however, If you ever had a secret longing to watch a 79-year-old shirtless man insert the business end of a bee into a bulging tumor in extreme close up for minutes at a time, then Me, the Bees and Cancer is certainly for you. It’s definitely not for the squeamish.

The $1,000 Feature Film Challenge is an initiative of indie producer Ingrid Veninger’s Toronto-based pUNK Films in collaboration with Stacey Donen, the director of programming at The Royal theatre. Under the rules of the challenge, projects must be shot in July over a period of four weeks and are allowed six weeks of digital post at The Royal’s Theatre D. Veninger and Donen have the first right of refusal to distribute the film. Me, the Bees and Cancer was one of the five finalists in the first year of the challenge.

Wyndham Wise is the former publisher and editor-in-chief of Take One: Film in Canada. He was Associate Editor with Northernstars.ca when this was published in 2013.