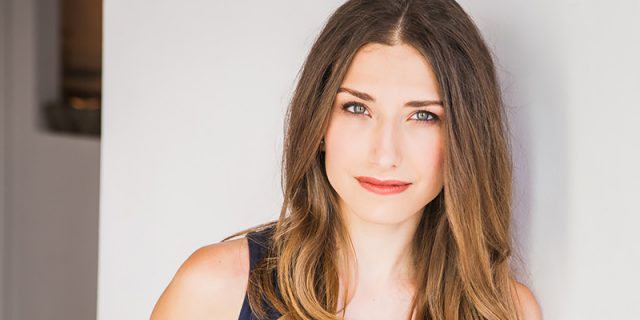 (August 28, 2020 – Toronto, ON) Many industries offer clear pathways for advancement. From apprentice to master may take years if not decades in some professions. Surgeons don’t begin their careers as surgeons. Jet pilots start in single engine propeller trainers. And while it’s true that many actors take years of training in college drama courses or other institutions, it is still true that many people start their careers in front of the cameras by being spotted on the street by a talent scout or knowing someone who knows someone who is looking for a few people to make a short movie.

A couple of weeks ago I got a heads-up about Konstantina Mantelos, a Greek-Canadian actress who will make her feature film debut in the 2020 horror movie, Anything for Jackson, which will have its World Premiere on September 1st at the 24th annual Fantasia Film Festival in Montreal. It made me think about all that nonsense above and I arranged to send her some questions, which she took the time to answer.

RL) How old were you when you first thought of becoming an actor?

I honestly could not tell you the exact age I decided to become an actor because I have always loved living out fantasies; I have been a daydreamer for as long as I can remember. I loved playing pretend as a child because the fantasy world always seemed more interesting than the real world. At some point that evolved into a love of film and performance, and pursuing acting happened pretty organically from there.

RL) Like many, if not most actors starting out, you worked in a number of short films. Other than getting some on-camera experience, what is the main benefit of working in shorts? Working with different directors? Working in different genres? Getting to play very different characters?

All of the above, really! In all honesty, for me, short films provided the opportunity to tackle challenging, leading roles in an array of genres. I have had the opportunity to play a teenager suffering anxiety in a dark comedy, a housewife who desperately wants to help her husband suffering from PTSD in a period drama, and a woman tormented by an imaginary mermaid in a fantasy. If it were not for the amazingly talented up-and-coming filmmakers who wrote and cast me in these roles, I would not have been able to hone my work on-set to prepare me for my role in Anything For Jackson.

RL) Did you do any formal training, or attend any acting schools like the National Academy in Montreal?

Yes, I have. I have trained at the American Academy of Dramatic Arts in New York City, and the Ryerson School of Performance in Toronto.

RL) Had you heard about Anything For Jackson before being offered a role?

I had only seen the information on the audition breakdown, but that was enough to get me excited. The premise of the film was so unique, and the characters all had such strong drives. Sheila McCarthy, Julian Richings, and Yannick Bisson were already attached to the project, so I immediately knew that this was going to be something special.’

RL) More specifically, how did you land the role of Becker in Anything for Jackson? Was it your agent? Did the producer or director send you a script?

My agent had initially sent me an audition for a much smaller role in the film, and I remember reading the descriptions for all the characters and thinking, “Damn, I wish I could have auditioned for Becker.” I was immediately drawn to her vulnerability and resiliency. Amazingly, shortly after the initial audition I was contacted about auditioning for Becker and it felt like fate! I read for two of her pivotal scenes in the film and about a week later I got that call from my agent that all actors hope for!

RL) Had you worked with Justin Dyck before?

No, but I definitely want to work with him again!

RL) Anything for Jackson is a genre film. Are you drawn to the genre or was it the story that intrigued you?

There were many things that drew me to the film, but I am actually a fan of horror and genre films in general, so it really felt like the perfect movie for me. I think that genres like horror, science-fiction, and fantasy really tap into our capacity for creativity and tell us a lot about who we are as people. In horror films, the audience gets to viscerally feel what the character is going through, as if they were there themselves, and that kind of immersion, to me, is what movies are all about.

RL) As mentioned, you got to work with some very established actors. Any special memories of working with one or all of them? 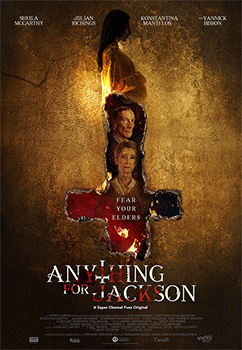 Oh wow, yes, I could go on for days about what a privilege it was to work with so many well established and experienced Canadian actors. They each taught me so much, but one story comes to mind that I can share. I was doing one of my first scenes with Julian Richings: it was a quiet and emotional dialogue scene, and at one point I start to cry. I was very excited to be working with Julian, and it is a great scene for my character. We get going, the scene is playing out beautifully, we were working very organically off each other, and, boom: the tears start flowing. It was great!

But then they call cut and Julian leans over to me. He is very kind, starts telling me what beautiful work I was doing… and then gently reminds me that they were on his close-up. He pointed out I should probably save my tears for when the camera was actually pointing at me! It seems like such an obvious thing, but in the heat of the moment, and it being my first week in a role of this scale… I got caught up in the moment. Thank goodness he said something because we had to get so much coverage for the scene and by the time they had gotten to my close-up all those lovely organic tears would have long been dried up!

RL) You wrote two of the short films you were in, is screenwriting something you hope to continue, or will you strictly concentrate on acting?

I definitely intend to continue writing, I have caught the bug. Acting will always be my first love, but now that I have experienced what it is like to build a world, craft a character, and take them on a journey, I do not think there is any turning back.

RL) Is there a Canadian director you’d like to work with?

I would really love to work with Denis Villeneuve. His film Arrival is easily one of my favourite films and he has inspired much of my writing. I am very excited for his upcoming Dune adaptation. I started reading the novel this summer!

RL) Any advice to actors just starting out?

Always have an answer to the question “why am I doing this?” Having a concrete answer for that question will save you a lot of wasted time and will lead you along the right path for you in this industry.

RL) What’s next for you?

I am currently in development on my first feature screenplay – a horror film about a young woman discovering her dormant witch powers when she meets a seductive stranger.