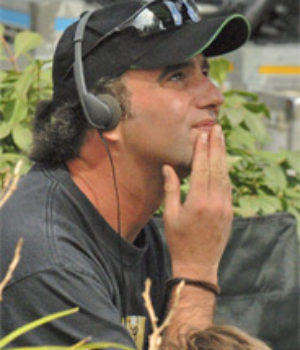 Michael Melski began his career in the world of theatre. An award-winning playwright, he has served as past playwright-in-residence at the renowned Shaw Festival in Niagara-on-the-Lake, Ontario.

Born in Sydney, Nova Scotia, Melski studied English and Theatre at the University of King`s College in the late 80s, where he began his story-telling career in the famous King`s Pit. His play, Hockey Mom, Hockey Dad was nominated for both a Merritt and a Dora Award and was a smash hit at Toronto`s Factory Theatre in 2004, and named one of the Top Ten Plays of The Year by the Toronto Star. Licensed internationally by Marquis Entertainment, the play has had over forty professional stage productions, as well as a national tour. In 2005, Michael directed his play The Fly Fisher’s Companion which opened to acclaim at Ship’s Company, and was also a hit at Shadow Theatre in Edmonton and Gateway Theatre in Vancouver, where it received a Jessie nom for Best Production. The play is scheduled to be published by Playwrights Canada Press inn the spring of 2009, marking his 6th play in print.

Corvette Crossing, Merritt-nominated for Best New Play, premiered to rave reviews at Eastern Front Theatre, where it was hailed as “a tour-de force” by The Chronicle Herald and “an important addition to the Canadian theatre canon” by The Coast.

In the late 1990s, Melski became interested in film and served a residency period at the Canadian Film Centre in Toronto. He has written extensively for film and television, including writing and story-editing the celebrated youth drama Straight Up (Best TV Series of 1997- Globe and Mail), the cop series Blue Murder (Gemini-Nominated for Best Dramatic Series), as well as the acclaimed CBC satire Snakes and Ladders.

His first feature film as screenwriter was the Vancouver-produced Mile Zero from Anagram Films. It has screened at festivals worldwide, winning multiple awards with the screenplay being singled out by the Hollywood Reporter and the Vancouver Courier saying it was “A breathtakingly honest script.” His second screenplay, the comedy Touch and Go, was a hit at the 2002 Atlantic Film

Festival and has also screened at festivals in Toronto, Edmonton, Victoria, Kingston, and Los Angeles.

He began making short films while a student at Ryerson Polytechnic University in Toronto. His first film as director, the half-hour drama Serenade, premiered at the 2000 Atlantic Film Festival where it won the Best First Time Director Award. His second short, Lift Off, screened to critical acclaim at the 2002 Atlantic Film Festival, as well as the Midwest Film Festival and the Delta Film Festival in California where it was an Awards Finalist. Melski also directed for the premiere season of the hit CTV series Robson Arms, starring Mark McKinney and Margot Kidder and showcasing Canada’s emerging directors. His short film, Focus Group Therapy, premiered at the Westcliffe Digital Film Fest in Colorado where it won the Jim Jarmusch Award for Best Narrative Short.

He extended his reach into the film world with his first feature, Growing Op, which he not only wrote and directed, but also served as one of the co-producers. Shot during the summer of 2007, it was released in November of 2008. His film, Charlie Zone was named Best Dramatic Feature at the 2012 imagineNATIVE Film + Media Arts Festival in Toronto and won four awards at the Atlantic Film Festival including Best Atlantic Feature, Outstanding Direction, Cinematography, and Outstanding Performance by an Actor.

This biography is © 2016 by Northernstars.ca. Click here for more about copyright.