I need to begin with an admission or two. First, I dislike Woody Allen and have trouble separating the man from the artist. I believe that a bevy of apologists cannot fix the man who married his adopted child. Second, once upon a time I was a fan of Ernest Hemingway’s short stories, but especially his memoirs of Paris in the 1920s compiled in the slim book A Moveable Feast and published three years after he took his life. Finally, I used to be a fan of Ray Bradbury way back when, and always enjoyed his literate approach to science fiction and fantasy storytelling. And so with that baggage I trotted off to see Midnight in Paris primarily because it costars a couple of Canadian actors, Rachel McAdams and Alison Pill.

Fully prepared to not like the movie simply because of its writer and director, the opening act quickly establishes Gil (Owen Wilson) as the Woody Allen character, which he plays to perfection, and Inez (Rachel McAdams) as the woman he is supposed to marry but should escape from as quickly as possible. Gil is a highly successful screenwriter who is trying to leave that and the Los Angeles lifestyle behind. He has written his first novel. But, as McAdams has been quoted as saying, "Inez is used to having her way. Gil wants to stay in Paris. Inez wants Gil to keep writing lucrative screenplays so they can have a comfortable life in the United States. McAdams effectively transmits the spoiled brat bitchy fiancée she is playing so well you actually become uncomfortable every time she opens her mouth to deliver Allen’s lines. To my surprise I was beginning to like the film, which was, after all, selected to open the 2011 Cannes Film Festival.

The relationship between the two lead characters becomes jeopardized with the appearance of an old pal of Inez, the know-it-all Paul (Michael Sheen) who is one of those show-off intellectuals. Inez has had a crush on him since college but Gil thinks he’s the pompous ass he really is. After a trying night out together, Gil opts to walk home.

Instead of going on to a night of dancing, Gil, lost, tired and a little confused, sits for a while and watches the traffic flow up a narrow, winding Paris street. A clock nearby strikes midnight and the next car coming up the hill is a 1920s limousine. It pulls up opposite Gil and the people inside coax him into joining them. Now the magic begins. 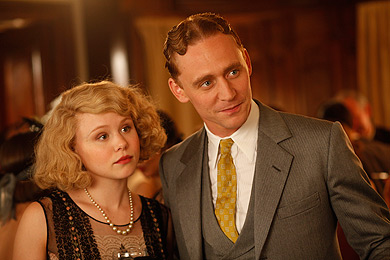 The romantic comedy shifts subtly into fantasy or sci-fi but never strays too far from its core. We know before Gil does that he has slipped in time. When the couple introduce themselves as F. Scott Fitzgerald (Tom Hiddleston) and his wife Zelda (Alison Pill), Gil thinks he’s at a costume party. Then he’s is introduced to his hero, Ernest Hemingway, acted with impeccable bombast by Corey Stoll. Stoll presides over some of the funniest scenes in the movie and his over-the-top macho dialogue captures the essence of the man that has come down to us through some sort of intuitive understanding of the famous writer even if you’ve never read a word he has written.

When Gil wakes the next morning he thinks at first it was all a dream. When he tries to drag Inez along she just doesn’t have the patience and splits for their hotel just as the clock strikes midnight again. Gil now understands he has found a portal to the past, which he visits again and again to the point where his future father-in-law has become suspicious of his midnight ramblings and hires a local detective to follow him. That leads to another funny but unnecessary scene toward the end of the movie.

The key to Allen’s marvelous portrait of Paris is Paris itself. Largely unchanged for decade after decade, the ease of moving from one era to another – and at one point to another – using real locations is seamless. If you didn’t know it was impossible, this film goes a long way to convincing you otherwise and more importantly, almost makes you wish it were possible. As Gil makes his nightly escapes into the past we get to meet and spend time with Gert (Gertrude Stein) played superbly by Kathy Bates, as well as with Pablo Picasso and a whole list of famous people from the past. The most important one is Adriana, a girlfriend of Piccaso’s played by the exquisite and beautiful Marion Cotillard. When she first meets Gil she comments on his tie. When Picasso met a girl named Marie-Thérèse Walter who would become his mistress and model she did not know who he was but supposedly made a comment about the tie he was wearing. The portrayals, these sorts of details and the timeless beauty of the city itself lend credence to the idea behind the film. I can’t spoil the film by revealing the truth that time travel is impossible, but in the end Gil gets to live the life he wants in the present and that is Allen’s greatest message here.

Ultimately it dawns on you that this gentle masterpiece is not so much about escaping the life and times you live in but learning to accept these times as some future generation’s ideal destination if only they could get back to where we are now. Global warming, excessive gas prices, unpredictably destructive weather, politicians who follow the polls instead of leading by the courage of their convictions, it is difficult to think this might be anyone’s ideal time to be alive, but it is our time, the only time we have and we had better make the best of it before it – and we – are gone.

The other thing we have is great filmmakers, and with Midnight in Paris, Woody Allen reaffirms his genius as a writer and director. I may never be able to change my opinion of the man, but I plan to see this film again. There is a timelessness about this instant classic. It’s like some new version of It’s a Wonderful Life or Casablanca, in which Humphrey Bogart’s character Rick Blaine says, "We’ll always have Paris." I think we’ll always have Woody Allen’s Midnight in Paris.

Midnight in Paris is distributed in Canada by Mongrel Media. It opened in Toronto and Vancouver on Friday, June 3, 2011.