While it’s common for future movie stars to get their start in fringe theatre, small stage roles and television, the days when a career in radio led to the silver screen belongs to the distant past, to the time Before Television. Yet, the tradition continues and one such example is Toronto’s Rick Moranis. But it wasn’t exactly a straight line. 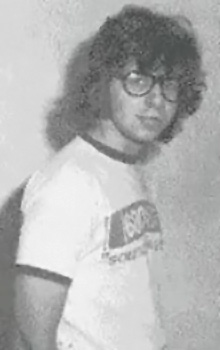 They’re called operators, ops, engineers, producers and/or button-pushers. They’re the people who make sure a radio program runs smoothly and that’s how Rick started in show business. Behind the scenes. But he had unstoppable ambition and ended up on the air using the name Rick Allen and hosting his own all-night show at CFTR Toronto in the early 1970s. Later he held down a weekend shift at Toronto’s CKFH. All the time he was honing his stage skills at standup comedy. By 1977 he was trying his hand at The Comedy Store and The Improv in Los Angeles, but without legal immigration status there was no way Rick could stay in the US. Back in Toronto he began to write for and appear on some local television shows, and was asked by his friend Dave Thomas if he wanted to join the second coming of Second City.

The history of the TV version of Second City is a bit convoluted. The first incarnation was called Second City and featured John Candy, Joe Flaherty, Eugene Levy, Andrea Martin, Catherine O’Hara, Harold Ramis and Dave Thomas. It began life in 1976 for Global Television and died about two years later. It languished as a fond memory and was resurrected in 1980 as SCTV for the Canadian Broadcasting Corporation. This time the cast was comprised of Robin Duke, Joe Flaherty, Eugene Levy, Andrea Martin, Tony Rosato, Dave Thomas and, now, Rick Moranis was on board. It was during this version that the now legendary characters of Bob and Doug McKenzie were born. There is one story that says the idea for the pair grew out of a demand from Canada’s broadcast regulator for more identifiable Canadian content in the series. What could be more Canadian than a pair of beer-guzzling, back-bacon-chewing “hosers” who allegedly represented a certain segment of Canadian society. That’s according to Dave Thomas and Rick Moranis anyway. The skits, which were largely improvised, became the highlight of the series and was how many Americans came to identify Canadians when a version of the show, SCTV Network 90, was picked up by NBC. But in 1982, Rick Moranis and Dave Thomas had decided to look for greener, or larger, pastures and left the show. One of the replacements, by the way, was Martin Short.

Out on their own, one of the first projects was the 1983 feature film, which Moranis and Thomas starred in, co-wrote and co-directed. They also recorded a McKenzie Brothers album, The Great White North, which went on to win two Juno awards as well as being nominated for a Grammy. In a perfectly logical twist of fate, Rick and Dave were given the Order of Canada for their contribution to Canadian culture. Go figure.

If stardom wasn’t exactly waiting for Moranis after Strange Brew, his next few films didn’t do much for him either. Then along came Ghostbusters. Suddenly he was in a hit movie that did big box office and people were starting totake notice. Finally the all-night radio announcer from Toronto was hot stuff in Hollywood. He starred in and performed brilliantly in Little Shop of Horrors; had a solid role despite the one-gag character he played in Spaceballs; he was perfect in Honey I Shrunk the Kids, and was invited back with the offer of an expanded role in Ghostbusters II, which was released in 1989. Also released that year was Parenthood, for which he won an American Comedy Award as Funniest Supporting Actor in a Motion Picture.In 1990 he was getting ready to film the feature City Slickers when his wife was diagnosed with cancer of the liver and he backed out of the project to devote all of his time to her. Anne Moranis passed away the following year. With that loss, and having two kids to raise, it must have been difficult for him to return to work. But he did.

Disney had decided to spin out the success of Honey I Shrunk the Kids and created the so-called “Honey” franchise. The first sequel to Rick`s previously highly popular film was titled Honey, I Blew Up the Kid and most critics thought it was a disaster. Other episodes haven’t done much either. His last outing as the woeful Wayne Szalinski was in the 1997 direct-to-video release, Honey, We Shrunk Ourselves. But he has had some solid successes too including The Flintstones and Big Bully.

His last five projects have all involved him as a voice actor. It’s almost a return to his roots in radio; heard, but not seen. In 2004, Moranis joined the Advisory Committee for the Comedy program at Humber College, which is the only such diploma program in the world. Whether this is an act of “giving back” or a nod to his home town is of no consequence. The simple fact is the next generation of funny people will benefit from someone who, like them, had a dream, and made it happen.

UPDATE: Moranis made news twice in 2020. First he showed up in a television commercial for fellow Canadian Ryan Reynolds‘ Mint Mobile, a company the Vancouver-born actor purchased in 2019. Then on October 1 while Moranis was walking near Central Park he was suddenly punched in the head by a man wearing an “I Love NY” hoodie. Security footage of the attack showed a man running up and knocking him to the ground before walking away. The actor went to hospital and reported pain in his head, hip and back before reporting the crime to police. His assailant was tracked down by police and arrested in mid-November 2020.

Rick Moranis has kept a very low profile since his wife’s death from cancer in 1991, choosing to focus on raising his children.

The image of Rick Moranis and Dave Thomas from Strange Brew and the teaser poster for Ghostbusters were scanned from originals in the Northernstars Collection.

This biography is Copyright © 2020 and may not be reproduced without prior written permission. For more information about copyright, click here.