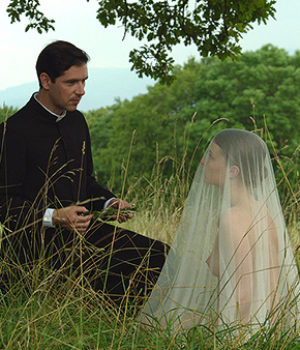 (September 8, 2015 – Montréal, QC) The 2015 Montreal World Film Festival wrapped last night with the Grand Prize going to Fou d’Amour, the latest film from director Philippe Ramos. Set in France in 1959, a man accused of two murders is found guilty and condemned to death. He is guillotined. But his head begins to tell the story of his life. He was a priest. He loved life, he loved women, he loved God and preached every Sunday in his church. A perfect life! An admired priest, a wonderful lover, his earthly paradise seemed never-ending. As the director described it, “In my earlier film, Ici-bas, I placed all the anguish of the world on the shoulders of the priest, imbuing the story with a suffocating gravity: the lively and seductive side to the murderer was largely discarded. This left me with a sense of unfinished business. With Fou d’Amour, just as a painter repeats his motif in order to explore new aspects, I reworked my canvas: this time, the happiness and pleasure would be voluble and would precede the devastating madness. So the film has a lighter, even humorous tone, before the colours change here and there to create a deteriorating atmosphere and a darkening mood, until it all turns black and tragic.”

Following are the other awards handed out in Montreal last night:

Public Awards:
The Public was invited to vote for the most popular films presented during the 2015 Montreal World film festival.

Public Awards for the most popular film of the Festival:
Chucks from Sabine Hiebler and Gerhard Ertl, from the Cornelia Travnicek novel (Austria)

Public Awards for the most popular Canadian film of the Festival:
The Girl King from Mika Kaurismäki (Canada / Finland /Germany / Switzerland)

OTHER AWARDS:
A special grand prize of the Americas was awarded to producer Lord Puttnam for his exceptional contribution to the world of cinema.