Home News Nell, Ernie and Bert: The Centenary of Back to God’s Country 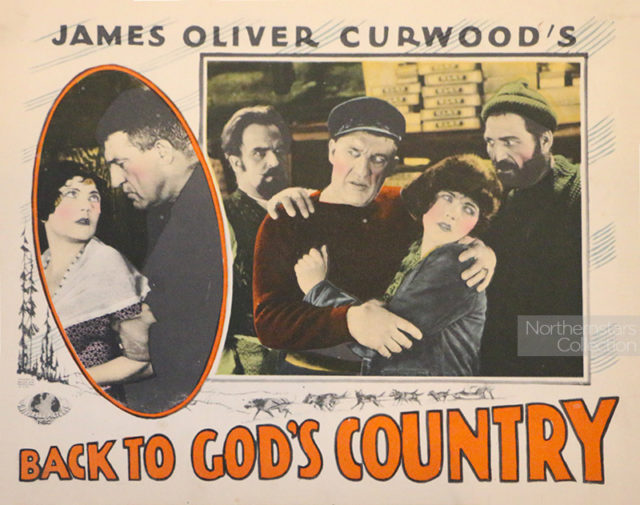 Nell, Ernie and Bert:
The Centenary of Back to God’s Country
By Wyndham Wise

(May 27, 2019 – Toronto, ON) Back to God’s Country is a 1919 Canadian melodrama produced by Ernie Shipman, based on a novel by James Curwood, directed by David Hartford and Bert Van Tuyle (not credited), and starring and written by Nell Shipman. With an estimated budget of over $67,000, it’s the most successful silent film in Canadian history, notable for its romantic naturalism, its activist heroine, and its “naughty but natural” nude scene. Shot on the shores of the Lesser Slave Lake, north of Edmonton, and near Kern River in the Sequoia National Park, California, it was released in the U.S. September 29, 1919, and October 27 in Toronto, at the Strand, on Yonge Street north of King (which was closed a year later).

The winding and overwrought plot of Back to God’s Country begins when a “Chinaman” and his large dog enters a northern establishment of ill repute. The Chinaman is shot dead, his dog claimed by the salon owner, Blake (Charles Arling), who treats it cruelly. Cut to an idyllic scene in a peaceful Canadian mountain home “a thousand miles south” where the plucky “child-of-nature” Dolores (Shipman) lives with her doting father Baptiste and a legion of animal friends. When a handsome Government naturalist, Peter (Wheeler Oakman), stops in at their mountain paradise, he’s charmed by Dolores and the pair soon announces their engagement. Dolores possess an astonishing natural affinity with wild animals, including a porcupine in her bed and Cubby, her pet bear. 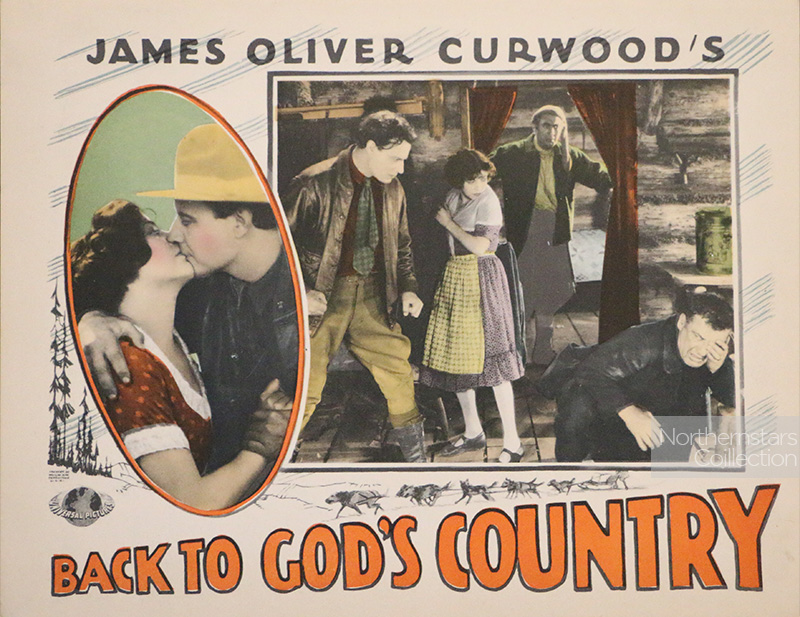 Camping nearby is a cartoon bad man, a real “Snidely Whiplash” character. His name is Rydal (Wellington Plater) and he doesn’t have a pencil-thin mustache, black top hat or cape, but he may as well have. Rydal’s partner is only referred to as the “Half-Breed.” When a clueless Mountie comes across the pair, gun drawn, he’s immediately shot dead by the Half-Breed and Rydal puts on his uniform. They soon happen upon Dolores, about to take a refreshing skinny dip at a lake near her house, resulting in the famous nude scene as she hides behind a waterfall.

Rydal is driven away from his lusty pursuits by Cubby the bear and comes upon Baptise’s cabin. When Dolores returns, Rydal attempts to rape her and the Half-Breed is killed as her father tries to prevent him. Rydal arrests Baptise, then pushes him off a cliff to his death in the water below. Peter arrives on the scene to save Delores as Rydal escapes. 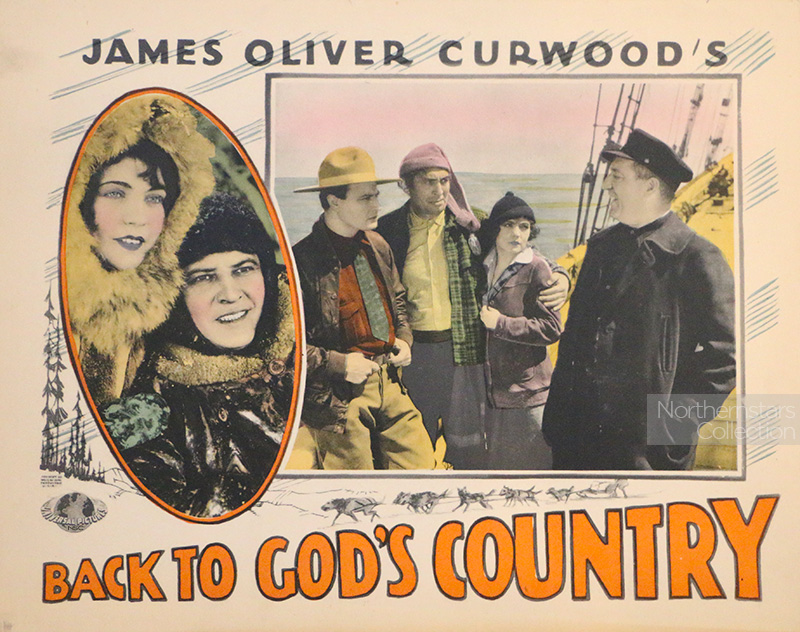 A year later, Dolores and Peter are now living in Montreal. Peter receives a telegram inviting them to take a boat trip. Unfortunately, the excursion is a trap masterminded by the ship’s captain, Rydal, still intent on “having” Delores. Peter is hurt badly when a mast is deliberately dropped on his head, and Dolores and Peter are taken to a nearby port where Rydal’s crony, Blake, runs the bar. This is where “Wapi the Wonderdog” comes back into the picture. When Dolores stops Blake from whipping the dog, a title card informs us that with this simple action Wapi learns the true meaning of love. She appeals to Blake to help her take Peter to a doctor, and he offers her the use of dogsleds. Dolores and Peter speed away, with Rydal in hot, murderous pursuit. She’s about to give up when she sees Wapi running to her rescue after an extremely lengthy and tedious chase. Later, the law catches up with Rydal, who falls through the ice and drowns. Peter and Dolores live happily ever after back in God’s country with all her animals, including Wapi.

Although David Hartford was credited as the director of Back to God’s Country, the real talent behind the camera was Nell Shipman (born Helen Foster-Balham), a remarkably accomplished young woman who often directed, starred in, produced and also scripted her films. Born in 1892 to a British Victorian family who immigrated to Victoria, B.C., little Nell was precocious and ambitious. At the age of 13, she began travelling, sometimes accompanied by her mother, with vaudeville shows and in theatre stock companies. She rose from an actress to become a successful writer and one of film’s first female directors.

Ernest G. Shipman, whose nickname was “Ten Percent Ernie” (because he extorted a 10 percent kickback from his salaried employees) produced seven Canadian silent features from 1919–23. He was educated at the Ryerson School in Toronto and became interested in promotion and publicity. Essentially a smooth-talking flimflam artist and adulterous ladies man, he was running the Canadian Entertainment Bureau in Toronto and soon after was the president and general manager of the Amalgamated Amusement Company with offices on Broadway in New York City. 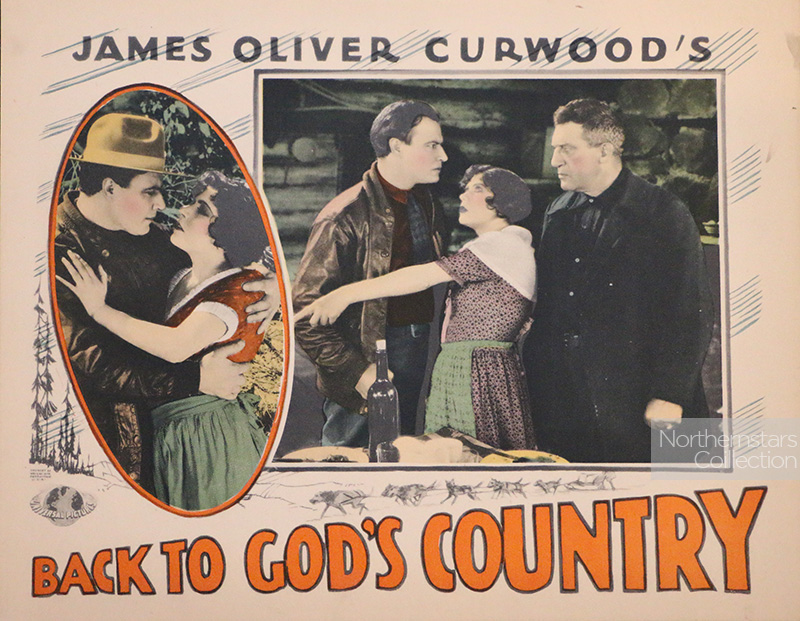 He was in Vancouver casting for one of his stage ventures in 1910 when he auditioned and bedded the 18-year-old Nell. He was 41 at the time. (The proverbial casting couch is as old as movies.) Whether this was true love or lust, Ernie certainly knew a meal ticket when he saw one and for Nell this was probably a good career move. The couple travelled to California in 1912 where he promoted films written by and starring his young wife. Nell combined entrepreneurial savvy with showbiz knowledge to develop an exclusive contract with best-selling American author James Oliver Curwood, who often set his tales in Northern Canada. Starring roles in films, mostly for Vitagraph, were followed by a seven-year contract offer from producer Samuel Goldwyn in 1917. She turned him down in favour of starting her own production company with Ernie, and filming Back to God’s Country, based on Curwood’s novel Wapi, the Walrus.

Ernie was not a hands-on producer. He was the moneyman, leaving the actual production details to Nell, the American director Hartford, and Bert Van Tuyle, a handsome former racecar driver who functioned as the production manager. During the production, Bert developed an overwhelming passion for Nell (which would later morph into homicidal jealousy) and soon after the film was complete, Nell left Ernie for Bert. However, by 1921 Nell’s dealings with her new backer, the Los Angeles theatre magnate W. H. Clone, became acrimonious. Clune and his investors were enraged with Shipman and Van Tuyle’s work on The Girl from God’s Country (1921, so titled to capitalize on her success with Back to God’s Country), the first feature-length motion picture from their newly formed company, Nell Shipman Productions. Investors wrested the film from Shipman and reedited it badly.

Shipman and her lover relocated to the relative isolation of Spokane, Washington, where they made another stab at a feature, The Grub-Stake (1923), which never received proper distribution. Nell and Bert moved again, this time to the remote Priest Lake, in northern Idaho, where they established a small production studio and animal sanctuary. They made several wildlife shorts, but sometime later Van Tuyle’s foot, frostbitten while making Back to God’s Country, became gangrenous. Shipman managed to transport him down the frozen lake to a hospital, imitating in life the heroine she played in Back to God’s Country and making national headlines.

New Year’s Eve 1924, Bert found Nell with a younger actor, and, rifle in hand, accused them of impropriety. Shipman left the lodge where they were staying and walked out onto the frozen lake. In her autobiography she says that she was intent on throwing herself in, but her son, Barry, from the marriage to Ernie, saved her. The two fled to Spokane, and from there they travelled to New York City, never to return to God’s country or the silver screen. Nell married again in 1925 and had another two children, but her final years were difficult. She ended up homeless in New York and died penniless in Los Angeles in 1970. Ernie drank himself to death at 60, passing away, all but forgotten, in NYC in 1931. Bert died in 1951 in Los Angeles with no other screen credits beyond his work with Nell.

Nell’s pioneering work and unique, feisty personality (captured in her autobiography The Silent Screen and My Talking Heart published posthumously in 1987) were largely overlooked until along came Canadian film historian Peter Morris with his comprehensive history of Canadian cinema from the beginnings to 1939, Embattled Shadows (published in 1978). Ernie and Nell were all but forgotten figures when Morris began his work. For years there were no complete prints of Shipman’s films available for viewing, although a print of Back to God’s Country was eventually discovered in Europe and restored by the National Archives (it can be seen today on YouTube). Canadian film historians were excited by the discovery of this lost cultural treasure, and since then much praise has been heaped upon Nell as a proto-feminist filmmaker.

Despite this modern feminist take, on first release Back to God’s Country was all about lurid promises of nudity. Its box office tag line was “Is it Rude to be Nude?” Nudity in film was not as rare as you might think in the movie houses of 1920s, but it was definitely not common. You don’t have to look hard to spot dozens of naked women covered by the flimsiest of material sprawling about the Babylon set of D.W. Griffith’s Intolerance (1916) or the near-naked extras found in Ben-Hur: A Tale of Christ (1925) and Cecil B. Defile’s early epics, The Sign of the Cross (1932) and Cleopatra (1934). For the record, the most famous skinny dip is Heddy Lamar’s in the Hungarian film Ecstasy (1932). At first, Shipman opted to use a flesh coloured leotard, but it bunched up in the water. She went naked instead; however, it’s all shot discreetly from a distance with only the briefest of glimpse of her full figure in profile, just enough for the movie poster.

In early Hollywood, there were a few real female pioneers like Shipman who broke from the growing studio system to become independent filmmakers, and there were others who were able to successfully navigate the male-dominated system, such as Toronto-born actor/producer Mary Pickford and Hollywood’s first female director, Dorothy Aznar. In the lawless, rough-and-tumble teens and 1920s, before the male-dominated Big Five studios consolidated their power over the business, it wasn’t uncommon for women to work in all aspects of moviemaking including producing, directing, screenwriting, editing, costume design, camera operating, stunts, and theatre owning.

Ida May Park, a director of 14 movies and writer of more than 50, described movies at this time as an “open field” for “hardy and determined” women. Between 1912 and 1919, Universal Studios’ roster of 11 women directors made a total of 170 films. Director Alice Guy-Blache and her husband, also a director, founded the Solax Company in 1908, the largest pre-Hollywood film studio. In 1917, Lois Weber became the first woman to own her own movie studio, Lois Weber Productions. In 1919, Mary Pickford joined Douglas Fairbanks, D.W. Griffith and Charlie Chaplin to form Hollywood’s first artist-run studio, United Artists.

Nell Shipman was undoubtedly a pioneer during this pivotal period in cinema history. Unfortunately, she was a pioneer who got lost in the backwoods of Idaho and made some very bad decisions when it came to the twin loves of her professional life, Bert and Ernie.

Wyndham Wise is Editor of Take One’s Essential Guide to Canadian Film and former editor-in-chief of Take One: Film in Canada, as well as an occasional contributor to Northernstars.ca. All of the images were scanned from originals in the Northernstars Collection.