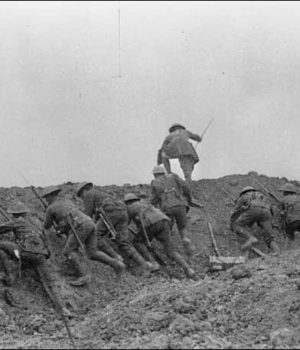 (June 24, 2016 – Toronto, ON) There is a word that so aptly defines the horrors of war it is, thankfully, rarely used. The word is “carnage” and during The War to End All Wars, carnage became almost common place. In a long war with many wholly destructive large campaigns and specific battles, the Battle of The Somme stands out in Canadian history.

This July 1st not only marks the 149th anniversary of Canadian Confederation, but marks another point in history usually overlooked everywhere but in Newfoundland. One hundred years ago Newfoundland was a British colony. On July 1, 1916, as part of the Battle of The Somme, about 800 soldiers of the Newfoundland Regiment went over the top and were mown down in a blizzard of German machine gun fire near Beaumont-Hamel in France. Only 68 made it for roll call the next morning.

On June 30, CBC Television will commemorate the tragic First World War battle with the broadcast of the new feature-length documentary Newfoundland at Armageddon by filmmaker Brian McKenna, who has spent much of his career documenting Canada at war. This 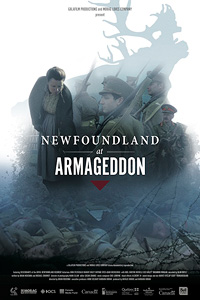 story is one of an epic tragedy, a single battle that lasted less than half an hour but altered for all time the destiny of England’s oldest colony, Newfoundland.

Newfoundland at Armageddon tells the powerful story of the sacrifices made by the men who gave their lives for King and Country. It also details the substantial contribution women made in the war effort, volunteering as nurses and aides overseas, while others shouldered the burden of their society on the home front. Not only did the women take on the work of the absent men, they created the Women’s Patriotic Association and, through it, knitted endless pairs of socks, sewed clothing, and sent medical supplies, while raising enormous sums of money for the regiment. After the war, their central role became a catalyst for a political awakening and the suffragette movement.

Twenty-one descendants (both men and women) of soldiers who fought with the Newfoundland Regiment were recruited and offered a unique opportunity to relive the experience of their ancestors. The descendants experienced life in trenches built specifically for this event on a National Defence of Canada rifle range near St. John’s in Newfoundland. Dramatic re-enactments highlight the work women on the home front carried out, including duties usually done by their men.

Four of the descendants travelled to Europe to follow in their ancestors’ footsteps from landing in England, training in Scotland, and finally marching on the field of Beaumont-Hamel.

Through these descendants’ eyes, and with the guidance of regimental records, historians’ research, soldiers’ files, diaries, letters and family stories, the documentary recreates the battle and its aftermath in Newfoundland. Enhanced by special effects and CGI, the battle and night raids are intercut with dramatizations, archive footage and photos, as well as interviews with prominent historians John Fitzgerald, Margot Duley, Gwynne Dyer and Adam Hochschild. Alan Doyle lends his voice to the production as narrator.

The personal and political consequences of the massacre at Beaumont-Hamel were, and continue to be, enormous for Newfoundland and Newfoundlanders. As a result of massive debt incurred 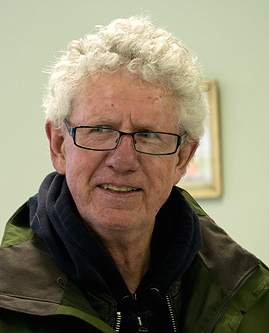 mounting a Regiment during the First World War, Newfoundland eventually lost its independence and became Canada’s tenth province in 1949.

“The First World War, and this terrible battle in which their sons were slaughtered, was a catastrophe for Newfoundland,” said director and co-writer Brian McKenna. “In this film we wanted to focus on the impact events had on all aspects of Newfoundland society – not just the men in the trenches but also all the contributions and sacrifices of the women of the dominion.”

“Wars are never confined to the battlefields, or to the men who fight them,” said co-writer Michael Crummey. “Eventually, they afflict every corner of a society, and that affliction is passed on from one generation to the next. No one still alive today in Newfoundland experienced The Great War firsthand but, for better or worse, we Newfoundlanders still carry the scars of that conflict and its aftermath.”

Newfoundland at Armageddon airs at 8PM (8:30NT) on Thursday, June 30 on CBC. Watch the trailer on Vimeo.

Stars on the Rainbow Carpet at Inside Out