(May 27, 2022 – Toronto ON) When the 20th edition of The Female Eye Film Festival (FeFF) launches on June 9, the opening feature will be Valerie Buhagiar’s stunning 2022 film, Carmen. Inspired by true events and set in Malta, the titular Carmen has devoted her life to the care of her older brother who happens to be the priest at the local church. When he dies, she needs to find a new way forward, a new life for herself. What she decides to do and the impact that has on the local community, in particular the local women is what makes this otherwise simple story compelling. Two short films will screen before Carmen at the festival’s headquarters, the TIFF Bell Lightbox in downtown Toronto.

Valerie Buhagiar receives a “Best in the Biz Tribute” which will take place on June 11. “When I answered Leslie Ann Coles’s call about receiving the Honorary Director’s Award at this year’s Female Eye Film Festival, I felt a warm embrace, along with the accumulation of years sitting at my kitchen table writing, organizing, and envisioning project after project,” said Buhagiar. “FeFF has presented four of my films since 2008.” 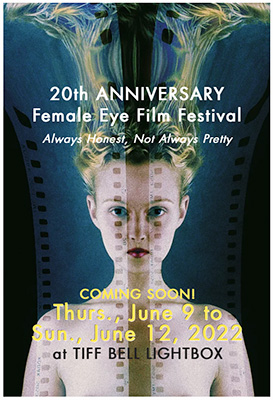 Other notable Canadian features, supported by Telefilm Canada, include We’re All in This Together, a clever adaptation of the novel by Amy Jones written by, directed by, and starring Katie Boland in her debut directorial feature film; The Kissing Game, a passionate urban fantasy and solo performance that explores love, betrayal, friendship, and identity directed by newcomer Montreal filmmaker Véa; Be Still, by Elizabeth Lazebnik, an homage to Canadian photographer Hannah Maynard, who was 40 years ahead of the Surrealist movement. And FeFF will also celebrate Toronto media artist Edie Steiner with a film retrospective and artist talk.

“In this ever-evolving landscape, supporting women in film and uplifting their work continues to be a priority at Telefilm Canada,” said Christa Dickenson, Executive Director & CEO, Telefilm Canada. “Increased career development, training for women of colour and Black women at all levels of experience, and enhanced data collection are all integral to supporting more diverse storytellers in Canada. Celebrating 20 years of believing and elevating Canadian talent both nationally and on a global scale, we’d love to thank Female Eye Film Festival for all the work they do in putting talented Canadians in the spotlight.”

FeFF has tackled gender equality and inclusion since its inception. The Indigenous Filmmaker Series launched in 2008 with Indigenous Canadian filmmaker Jules Koostachin at the helm. In 2009, FeFF produced the inaugural Young Filmmaker Development Workshop, a mentorship for debut female filmmakers. To date, FeFF has produced 46 short debut films, 26 by Indigenous filmmakers, and all had their premieres at Female Eye. FeFF continues to provide a dedicated showcase for local directors with the Toronto Filmmaker Series, which held its inaugural event in 2001. The Script Development Program, open to both men and women, celebrates its 15th edition in 2022.

Northernstars began publishing before FeFF began and we have covered it each year and in those years when our budget allowed we have happily supported the festival with some advertising. Many years ago now we interviewed festival founder and a driving force for women and film, Leslie Ann Coles. A director in her own right, her dedication to making her festival succeed has brought many accolades including this year being recognized as one of the “Top 50 Film Festivals Worth the Entry Fee” by Movie Maker Magazine for a 10th consecutive year.

The full schedule of national and international films is available online