(April 12, 2022 – Toronto, ON) It is the largest documentary festival in North America and Hot Docs gets underway later this month and runs into early May. We’ll be looking at in detail in the days ahead, but today the focus is on other festivals opening in the next several weeks. 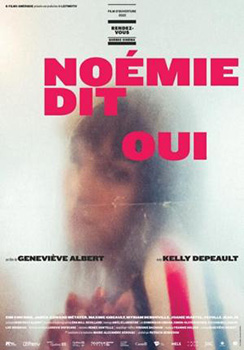 One of the more important festivals is Montréal’s RVQC, which stands for the Rendez-vous Québec Cinema. It kicks off on April 20 with a welcome party and its opening film is titled Noémie dit oui (Noémire says yes). Directed by Geneviève Albert, the synopsis for this 113 minute feature states “Unable to return home to her mother, a teenage girl (Noémie) runs away from the youth shelter where she has been living for the past three years. Yearning to be free, she soon meets Zack and falls in love with him. He tries everything to convince Noémie to become a sex worker. She finally complies, and overnight begins working as an escort.”

This is Albert’s first feature film. It explores the issue of child prostitution and the notion of consent. A social commentary on the fate of lost and vulnerable girls, Noémie dit oui tackles a difficult topic without ever veering into melodrama. Click here to find more about the 2022 RVQC.

The Calgary Underground festival is taking a dual approach to their festival. Theatre viewing will run from April 21 to 28 and the streaming at home portion will run April 29 to May 1. However, on the day before the festival and to celebrate National Film Day on April 20 the CUFF will have a free screening of the 2013 indie hit Rhymes for Young Ghouls. Set on the fictional Red Crow Mi’gMaq reservation in the year 1976, by government decree, every Indian child under the age of 18 must attend residential school. In the kingdom of the crow, that means imprisonment at St. Dymphna’s. That means being at the mercy of “Popper” (Krupa), the sadistic Indian agent who runs the school. At 15, Aila is the weed princess of Red Crow. Hustling with her uncle Burner, she sells enough dope to pay Popper her “truancy tax”, keeping her out of St. D’s. But when Aila’s drug money is stolen and her father returns from prison, the precarious balance of Aila’s world is destroyed. Her only options are to run or fight… and Mi’gMaq don’t run.

May sees the continuation of both the Calgary Underground and Hot Docs festivals. Opening in May are the Latin American Film Festival in Ottawa, the Montreal Underground Film Festival and Canada’s longest running film festival, Yorkton, which returns after a couple of years in mothballs thanks to COVID-19. It’s great that they’re back. The Festival began in 1947 as the Yorkton Film Council and this years marks their 75th anniversary. 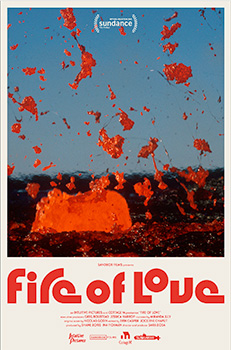 DOXA is the wet coast version of Hot Docs. It bills itself as “Western Canada’s largest documentary film festival.” Its 21st edition will be both in theatres and streaming online from May 5 to 15. The first couple of days are reserved for various meetings and industry events, the film portion of DOXA opens on Saturday, May 7 with Fire of Love, directed by Sara Dosa. The doc follows volcanologist couple Katia and Maurice Krafft as they travel the world, paddling through lakes of acid and venturing into areas of unstable volcanic activity with awe-inspiring results. Incorporating astonishing archival footage shot by the Kraffts themselves, DOXA describes the film as an “epic story of love and obsession, dedication and passion, and that sacred fire burning inside all of us.” Click here to learn more about DOXA

The 2022 Inside Out festival begins in late May. Full name: Inside Out 2SLGBTQ+ Film Festival. Running from May 26 to June 5, the festival will present 25 screenings at Toronto’s TIFF Bell Lightbox, more than 35 digital screenings in the Inside Out Screening Room. More details are available online.

As mentioned, April 20 is National Canada Film Day. Reel Canada and Cinéfranco have joined up to to create a special tribute evening celebrating the late Jean-Marc Vallée with a free in-person screening of the restored version of C.R.A.Z.Y. Read more about C.R.A.Z.Y. here.

The 19th annual Human Rights Watch Canada Film Festival will be held May 26 to June 2. The Opening Film is the World Premiere of Klabona Keepers. This 72-minute Canadian documentary spans 15 years of matriarch-led resistance and is a portrait of the dynamic Indigenous community that succeeded in protecting the remote Sacred Headwaters, known as the Klabona, in northwest British Columbia from industrial activities. All films are free, but tickets must be reserved through the Hot Docs website. However, right now they’re busy with the Hot Docs festival. We’ll add this festival to our listings when more information becomes available.

Hot Docs opens with Jennifer Baichwal’s Into the Weeds, which tells the powerful story of Dewayne “Lee” Johnson, a former Bay Area groundskeeper who takes on a multinational agrochemical corporation after a terminal cancer diagnosis.  Adding to her award-winning body of work centred on our strained relationship with the natural world, Baichwal follows Johnson through his battle, setting his personal journey against a global environmental crisis. The film is produced by Baichwal and long-time partner Nicholas de Pencier. Launch date is Thursday, April 28, at 6:30 pm, and Northernstars will have far more detailed information about the Canadian films at Hot Docs in the days ahead.