(August 31, 2022 – Toronto, ON) The first time we became aware of film festivals based on films about food was when our erstwhile Publisher, Ralph Lucas, covered an event in Toronto in August of 2017. It was for the Food Film Fest – Devour, which at the time was getting ready for its 7th festival in Wolfville, Nova Scotia. We’re happy to report that festival will be around again this year and takes place in late October.

Also in October, the Toronto Food Film Fest (TFFF) will present a full lineup of films, both features and shorts. And, as in past years, what goes great with a food film festival? Food, of course. This year’s festival (October 14-17) will include screenings and Chefs will once again be serving carefully curated snacks to pair with each screening, and Bottega Volo, now in the Royal Theatre lobby, will be offering their exclusive concessions. 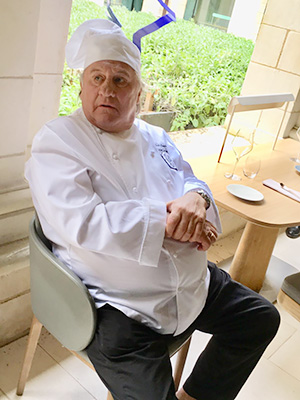 The lineup of 8 feature films and 18 short films will showcase some heavy-hitting films including two Canadian feature films. Movies such as Umami (France) will make its North American premiere from the Cannes Film Festival. Following a near-death experience France’s leading chef, played by Gerrard Depardieu, throws himself into a quest seeking the flavour that has confounded his life since he was defeated by a Japanese chef’s bowl of noodles as a young man. Also on the schedule is Copenhagen’s award-winning Director Miki Mistrati, who sheds light on child slavery in the cocoa and chocolate industry in the feature Chocolate Wars.

The Toronto Food Film Fest returns to The Royal Theatre on College Street and other Little Italy venues for the first time since COVID. “We are thrilled to bring back the Toronto Food Film Fest for its fourth iteration and back to where it all began. It is an honour to be able to introduce our audience to the best of what the independent film community has to offer through another hybrid event,” said Jacqueline Tam, co-founder of The Festival. “Bringing people together through food and film has always been a goal of TFFF and this year we seem to have a common theme of bringing food and family together. I am equally thrilled that our local independent film market will be showcased this year.”

Passes went on sale on August 29.

Meanwhile, the 12th edition of Devour! The Food Film Fest will take place from October 24-30 in Nova Scotia. The Festival program will be posted in September 2022.