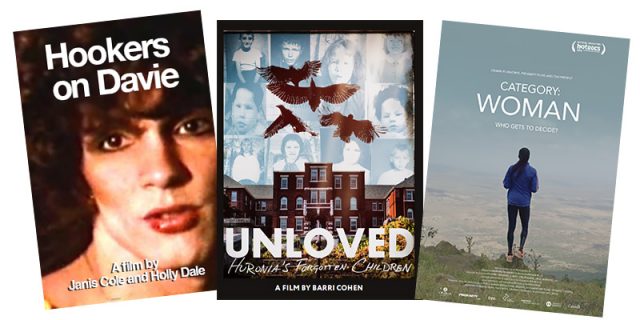 (April 26, 2022 – Toronto, ON) We’ve already covered all the Canadian films screening in the Special Presentations and Canadian Spectrum at Hot Docs 2022, but Canadian documentaries can be found elsewhere in the festival’s schedule. With this year’s edition about to begin in two days, today I’ll look at 3 more features and then I’ll highlight other films during the run of the festival.

First up is an old doc screening as part of the Redux program. Remastered in digital 4K format, technology has not altered its impact. Directed by Janis Cole and Holly Dale and released in 1984, Hookers on Davie is exactly what the title describes. Davie Street, for those who don’t know, is located in Vancouver, which was known at the time as “the prostitution capital of Canada.” This wasn’t some quick decision to grab a Bolex and film the so-called “working girls” in Vancouver’s residential West End, just minutes from Stanley Park. It is based on eight months of research by the filmmakers concerning prostitution in major cities throughout Canada and the United States. After spending two months on Davie Street talking with the hookers, the filmmakers were able to gain their trust and confidence. The subjects agreed to wear radio microphones while being filmed by a hidden camera. Shot like a documentary and put together like dramatic fiction, the subjects were filmed negotiating with tricks, and spoke candidly for the cameras about their experiences during breaks at a local restaurant. The Digital remaster was made possible by financial support from Telefilm Canada, in partnership with Hot Docs.

Unloved: Huronia’s Forgotten Children is a deeply moving highly personal film By Barri Cohen. It is another troubling chapter defined by the words “residential schools,” but this broadens the topic beyond a strictly indigenous story. I believe everyone would agree the underlying story is both painful and enlightening as we all learn more and more of our nation’s shameful past. What makes this film personal is that Cohen went looking for the truth about her half-brothers, Alfred and Louis, who were kept a secret from the rest of the family by her father. The 90-minute doc takes its audience inside the now-empty Huronia Regional Centre, one of three institutions created in Ontario in the 20th century to house the intellectually disabled child. It’s part of a network of institutions that made claims to care, train, and make lives better for children, youth, and adults who aged in place. It was where children were once kept in cage-like cribs or punished for minor misdeeds by being locked alone for hours in a lightless boiler room dubbed “the pipe room.” Hard to watch, difficult to come to terms with, yet important to our collective knowledge. Produced by award-winning White Pine Pictures in association with CBC’s documentary Channel, it was made with the participation of the Canada Media Fund, Rogers Documentary Fund, Ontario Creates, with the assistance of The National Film Board of Canada and The Canadian Film or Video Production Tax Credit.

Unloved: Huronia’s Forgotten Children screens:
Tuesday, May 3, at 5:30pm at the Isabel Bader Theatre
Friday, May 6 at 2:15pm at the TIFF Bell Lightbox 2
It can also be screened online.

Produced, written and directed by Phyllis Ellis, Category: Woman is part of the Persister program and it’s first screening is a World Premiere. Running 80 minutes, Category: Woman focuses on four athletes, two from from Kenya, one from Germany and one from India. The foundation for the story behind this film begins in 2009 when 18-year old South African runner Caster Semenya faced a barrage of media attention and her achievements on the field of sport were subject to nothing short of an assault. Her personal medical records were leaked to the international media and ultimately The International Amateur Athletics Federation (now World Athletics) ruled that ‘identified’ female athletes must medically alter their healthy bodies in order to compete; their naturally high androgen levels were deemed a performance advantage.

The film explores what happens when a fundamental right to decide who you are can be taken away and, if you want to play in the world of competition, someone else gets to make that decision. In a media kit the award-winning director states, “I was inspired and deeply affected by this story far beyond that of a filmmaker. I had experienced many challenges as an Olympian, and as a woman in high performance sport, but I may have collapsed under the pressure these phenomenal athletes have endured. How could this have happened?”

Category: Woman screens:
Sunday, May 1 at 5:30pm at the Isabel Bader Theatre
Wednesday, May 4 at 11:00am at TIFF Bell Lightbox 1
It can also be screened online.

Hot Dos runs from April 28 to May 8. There is more information online about these films and others and about streaming these films in Canada.