(March 16, 2022 – Toronto, ON) It starts when we’re young. A father or uncle pulls a quarter out of your ear and you not only think this is magic, but you think the magician can do no wrong. Most of us grow out of that childhood phase of believing anything and everything. Many of us don’t. Many of us fall prey to the con artists with the slick tales of untold wealth and how anyone can become rich just by trusting the ultimately untrustable.

Albert Rosenberg was one of those guys, and according to a new documentary from Barry Avrich and his Melbar Entertainment Group, he was much, much worse. It is titled The Talented Mr. Rosenberg and it will have its World Premiere next month at Hot Docs. 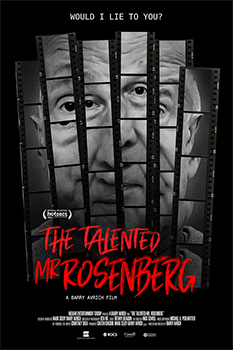 Inspired by the investigative journalism of writer Courtney Shea, who is a co-producer and co-writer on the 65-minute film, The Talented Mr. Rosenberg explores a world where cheats and swindlers may be a dime a dozen, but true con artists — like Bernie Madoff, Anna Sorokin … and Albert Rosenberg — are elegant, outsized personalities, artists of persuasion and exploiters of trust. How do they do it? Why are they successful? And what keeps us falling for it, over and over again? These are the questions that are tackled in this frightening and mesmerizing new film.

Through extraordinary and unprecedented interviews with Rosenberg himself, his daughter,
and his victims, The Talented Mr. Rosenberg will hopefully make you think twice next time someone you know well and trust explicitly offers you a chance to own part of the Brooklyn Bridge. Unfortunately, according to the media release, we’re actually wired to believe everything we hear, from get-rich-quick schemes to the subtle lies from complete strangers on dating websites. The irony is the smarter you think you are, the more readily you’ll fall.

Click here to see the cast and crew and watch the trailer for The Talented Mr. Rosenberg.

The 2022 Hot Docs Festival, April 28-May 8, will screen films in cinemas across Toronto in accordance with public safety protocols, as well as offering a selection of Festival films online on Hot Docs at Home to audiences across Canada. Festival packages are on sale now.