Home News All My Puny Sorrows – A Review

Based on Miriam Toews’ best-selling novel-cum-memoir, recalling Ingmar Bergman’s Persona in its tightly-framed depiction of two women who both love and are wary of each other, Michael McGowan’s All My Puny Sorrows hits all the right notes with bold assurance. He handles the visuals, sound, and performances with a no-fuss serenity and subtle shifts in tone, often between the unbearably sad and comic sparkle.

The picture, now playing in selected Canadian cities, opens with a question. Why is that neatly dressed middle-aged man (Donal Logue) standing on railroad tracks after tidily placing down his glasses? Because he’s about to calmly allow himself to get crushed by a train.

The story winds up when the movie flashes forward ten years to the suicide’s daughters. Yolanda/Yoli Von Riesen (Alison Pill) is a blocked writer embracing meaninglessness like a relationship with a dork she knows is a dork. In what might be the most heatless sexual film moment ever, the dork pushes himself into her while she grimaces at his neatly folded clothes. Who folds his clothes like that before sex, she wants to know. Who says thank you after sex?

Yoli, typical of the film’s self-aware, mocking characters is in the midst of a divorce, but delays signing the official papers, to the annoyance of her estranged husband and her teen daughter Nora (Amybeth McNulty). Like all the principals, Nora expresses herself, and maybe sidesteps pain, with her sharp wit. She doesn’t like being the intermediary between her parents. Do you think putting me between you and my father qualifies as child abuse?, she asks sardonically.

All My Puny Sorrows is driven by the emotional dynamics between Yoli and her sister Elfreida/Elf (Sarah Gadon). ELF has the lovely features and exquisite comportment of a Hitchcock blonde. Grace Kelly could have played her, but not as delicately as Sarah Gadon. A pianist with an international career, Elf has an attractive, well-grounded husband (Aly Mawji), and a touring schedule that takes her around the world playing to audiences that love her.

I’ve known a couple of people who were determined to kill themselves, one of them an attractive, talented woman, and succeeded. But they had identifiable reasons for wanting to die. Elf, like Yoli, was traumatized by her father’s death, and both felt oppressed by the strict Manitoba Mennonite community they grew up in. But Yoli would never consider killing herself, no matter how messed-up her life gets. Despite her beauty, her talent, and her loving husband, Elf does, and in the course of the film makes a serious attempt.

Professional medical care and medications don’t help. “Congratulations for the upgrade to the psych ward,” says Yoli, in the banter she and Elf use with each other. McGowan’s characters rarely get sentimental. They are always knowingly insightful, frequently ironic and even insulting, a little like George and Martha in Who’s Afraid of Virginia Woolf, but without that level of ferocity. 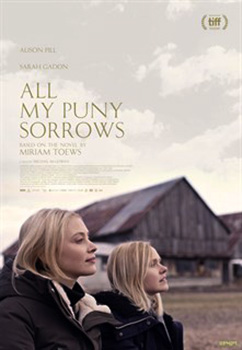 As in Virginia Woolf, the subtext is that these people love each other, and their cutting wordplay can lead to catharsis. At the heart of the picture is a standoff between Yoli and Elf. The beautiful pianist wants her sister to accompany her for a legal assisted suicide in Switzerland. She is motivated only by a fear of dying alone. Yoli puts all her energy into convincing Elf to go on living, no matter what. In one extraordinary confessional scene out of Persona, the sisters confront each other with no holds barred. The scene beats escalate to an explosion and then diminish. Elf confesses her utter despair of life. It’s all will she or won’t she at this point.

In his finely honed movie, McGowan questions the power of the intellect. It can come to the rescue. But as one of the characters says, “Equating intelligence to the desire to live – or decency” is a mistake.

Also see: Watch the trailer, learn more about the cast and crew of All My Puny Sorrows.

Maurie Alioff is a film journalist, critic, screenwriter and media columnist. He has written for radio and television and taught screenwriting at Montreal’s Vanier College. A former editor for Cinema Canada and Take One, as well as other magazines, he is affiliated with the Quebec media industry publication, CTVM.Info. His articles have appeared in various publications, including Canadian Cinematographer, POV Magazine, and The New York Times. He is the Québec Correspondent for northernstars.ca