(March 31, 2022 – Toronto, ON) The young protagonists in director/writer Bretten Hammon’s engaging feature Wildhood, particularly Linc played by Phillip Lewitski flee one confrontation only to discover many more down the road. That’s not to say his journey away from one towards another is futile. His escape from an abusive father with his younger half-brother Travis (Avery Winter-Anthony) in tow is necessary both within the context of the world Hammon creates, and in keeping with the format of the traditional road-picture.

But it’s worth noting that Wildhood pushes beyond the constraints of the road-picture. Abuse is the trigger that starts the journey, but it’s the call to adventure–in this case Linc’s desire to find a mother who may or may not be dead–and not the abuse that defines the journey, and ultimately defines the kind of movie Wildhood wants to be. You can out run abuse, but you can’t out run trauma.

And so, with somewhat of a wink to convention, Wildhood is a coming-of-age story reframed as a road movie; or a road story reframed as a coming-of-age movie. Either way, Hannam’s film works. Hannam finds purpose in each of his characters, whether they guide us through the entire story or pop up briefly at a roadside convenience store. Hammon was named by TIFF as an emerging talent, and recently he received the Toronto Film Critic’s Association Jay Scott Emerging Talent Award for 2021.

Lewitski comes on screen like a young Brad Pitt in Thelma and Louise, deliberate, assured, vaguely troubled. From there, the film continues on a path of brave revelations that take its characters on a journey of discovery, which involves the odd dichotomy of pressing forward to reach the past. 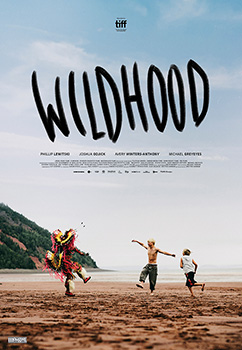 Hannam’s film has a rightful place along the concession roads of some of cinemas’ most impressive, road pictures. I liken it to PowWow Highway for reasons far more influential than the Indigenous connection and to TransAmerica and for reasons beyond that film’s dip into sexual-awakenings.

But Wildhood doesn’t follow any particular roadmap, instead forges a route all its own. There is no one fast on their heels, no spritely moment of mischief to carry the story through to a comfortable conclusion. The stops along the way suggest a life of seemingly disposable moments; things happen and then don’t. Occurrences appear, then move on. Time and relationships build to be made stronger or to eventually be forgotten. And through it all is the sense that everything matters.

Life is funny that way, and though I hate that I’ve come to a point where I can appropriately quote Tom Cochrane, but truly, Life is a Highway.

Watch the trailer and learn more about the cast and crew of Wildhood.