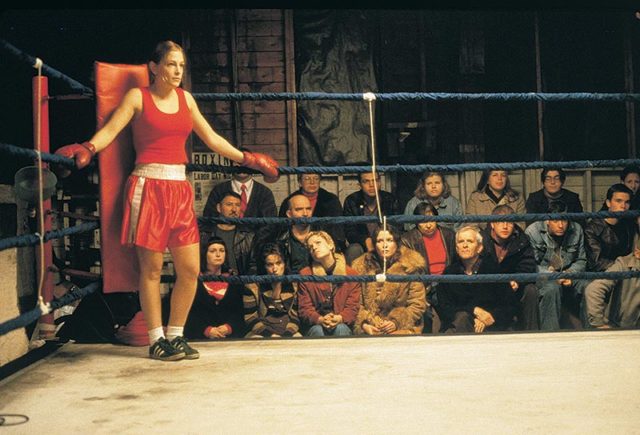 Fifteen-year-old Mooney Pottie is lying on her back watching the clouds go by, daydreaming about exotic places. With voice–over, she tells the story of her life in a small Nova Scotia town during the 1970s. Mooney is the town misfit, always reading a book, doing her best to ignore what’s going on around her. Presently, new neighbours move in next door: the 16-year-old, Lou, and her mother, Midge, a Latin–dance instructor. Lou and Mooney become friends

While putting up flyers around town to attract people to her mother’s dance lessons, Lou gets harassed by three local toughs. Meanwhile, Mooney watches a pregnant girl get on a train to go to her aunt in California and envies her for getting out of town. Lou picks Mooney up and they go cruising. She tells Mooney that her father is in jail because he killed someone in the boxing ring. She takes her to a bootlegger and then to a party where they meet another friend who has to go to Antigonish to have her child. A boy at the party who is pestering her becomes Lou’s first knockout. The three tough girls seek Lou out, and ask her to find and take care of a two–timing boyfriend; Which she does, decking him with the expression, “if they fall, they’re guilty.”


Mooney devises a plan to pretend to have sex and get a reputation of being the town “slut,” while Lou becomes the instrument of every girl’s revenge. Mooney let’s her parents know that she’s pregnant, and her sisters concur that she’s a “whore.” Later, at night, Lou and Mooney go for a long drive and end up at a sing a long down by the beach. There they are surrounded by a group of town boys who know that Mooney is still a virgin and threaten to tell her father unless Lou is willing to fight for New Waterford against a male boxer from Sidney. She agrees and wins, but the boys tell Mooney’s father anyway. He doesn’t believe them, he drives around town confronting every boy until he ends up at Mooney’s high school teacher’s place. The teacher, who is in on Mooney’s plan, and to help her get out of town, claims the baby is his. Lou hits him softly and he takes a dive, proving he’s guilty. Mooney gets to go to New York, while Lou stays in New Waterford, yelling at the end, “great party.”

The parallel story lines of Mooney and Lou form the nucleus of New Waterford Girl’s funny, bittersweet and thoroughly original screenplay by newcomer Tricia Fish. Set in the small, east–coast town of her youth, Fish has an authentic feel for the place and in Quebec–born director Allan Moyle, she found her soul mate. His handling of youth–oriented material (Pump Up the Volume and Empire Records) is well suited to Fish’s small–town, coming–of–age story. Mooney, played to perfection by Liane Balaban, lives up to her name and is indeed glum and moody. She hates her life, her town, her parents, the loser boys that surround her. Her only solace is a sympathetic high school teacher, nicely underplayed by former “brat packer” Andrew McCarthy, who encourages her to enrole in an arts school in New York.

Into this prison of small–town values – where “bad” girls are sent away to deliver their “mistakes” to avoid the embarrassment of an unwanted pregnancy – comes Lou (Tara Spencer–Nairn), a girl of Mooney’s age but as different form the moody Mooney as night is to day. Lou chose to come to New Waterford. It’s Lou’s attempts to gain acceptance and Mooney’s desperate need to get out of town that drives the plot of New Waterford Girl. Lou is at first picked on by the town’s tough girls, but when it is discovered that she has inherited her father’s knockout punch, the town toughs engage her to punch out one of their boyfriends who is two–timing. Lou asks, “If I do this, will I be a New Waterford girl?” “No,” they say with dumbfounded surprise. “You weren’t born here.” But Lou does deck the guy anyway and her road to acceptance has begun.

The relationship between Mooney and Lou is the core of the film and there is a great deal of chemistry between them. Balaban has been singled out for her fresh performance in a role that seems written for her (think of Shelia MacCarthy’s star turn in Patricia Rozema’s I’ve Heard the Mermaids Singing and you get the idea), but it’s Spencer–Nairn who carries the film and virtually steals every scene she’s in from her co–star. Whereas Balaban plays Mooney as a one–note wonder (her head cocked endearingly to one side, as if expecting the worst, with a winning smile from an elfin face the camera loves), Spencer–Nairn gives the necessary life and energy to the proceedings. Lou’s is the more original character and the film’s climatic scene is the fight between her and the boxer from Sidney. After a slow start, Lou flattens the guy with a wicked right hook. She finally becomes a New Waterford girl, and Mooney’s scheme to fool her parents (nicely played with out–of–touch charm by veterans Nicholas Campbell and Mary Walsh) into thinking she is pregnant succeeds with the help of her high school teacher. She gets to leave, if reluctantly, for New York while Lou happily gets to stay.

Allan Moyle brings over 30 years of experience to what, for him, is essentially a movie for hire. It’s Fish’s film, there is no doubt about that, but Moyle’s deft handling of the material holds things together and he doesn’t stoop to the current low ebb in teen comedies. This is no American Pie or Road Trip. The most gross–out thing is morning sickness. Moyle recognizes the subtleties needed to make New Waterford Girl work and he draws out the best from his two inexperienced leads. His choice and use of music is particularly effective. From the opening “Dragging the Line” by Tommy James, to the Canadian–heavy sound track, which includes 1970s hits from A Foot in Cold Water, April Wine and The Stampeders.

New Waterford Girl is a rarity in Canadian cinema, artistically and commercially successful at the same time. It’s an audience pleaser in the way that so many Canadian features aren’t. The only comparison in recent years is that other hit from down east, Mort Ransen’s Margaret’s Museum. It would seem that despite the film’s obvious Canadian trappings, a good story, well told and well acted will always draw a crowd, and New Waterford Girl is no exception to that rule.

This review was originally published in Issue 30 (Winter 2001) of Take One magazine. Northernstars.ca acquired the archives of Take One in 2007. The poster for New Waterford Girl was scanned from an original in the Northernstars Collection.

The Life Before This