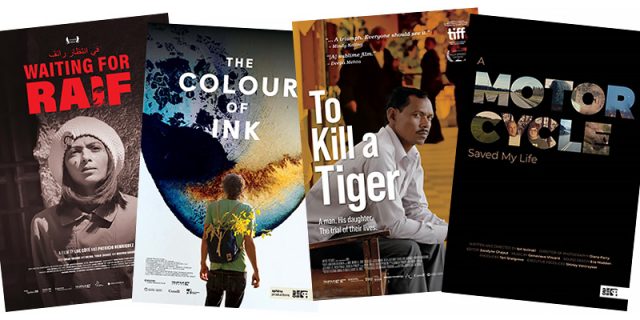 NFB at VFF
by Staff Editors

(January 17, 2023 – Victoria, BC) The National Film Board of Canada (NFB) will have four films at the 2023 Victoria Film Festival, three features and one short. The feature documentaries have already garnered praise and recognition and the short will screen for the first time on Vancouver Island.

The first of the features, in alphabetical order, is The Colour of Ink.

Jason Logan (pictured above) is an internationally recognized designer, creative director, author and artist. His illustrations appear regularly in the New York Times, and his fine art has been exhibited in New York City, Los Angeles, Toronto and the Yukon. His work has been recognized by the American Institute of Graphic Arts, the Society of Publication Designers, the Centre for Social Innovation and the Canada Council for the Arts. His most recent book, Make Ink: A Forager’s Guide to Natural Inkmaking, was included in The Guardian’s list of best books of 2018. His next book, How to Be a Color Wizard, will be published by MIT’s new children’s division.

Directed by Brian D. Johnson and produced by Ron Mann, with the support of the National Film Board of Canada, The Colour of Ink follows Logan as he works with ingredients foraged in the wild including weeds, berries, bark, flowers, rocks, and rust to make ink. He sends these custom-made inks to an eclectic range of artists around the world, from a New Yorker cartoonist to a Japanese calligrapher.

The 105 minute documentary will screen on February on 4 and 7 at the Capitol 6 Theatre.

Directed by Nisha Pahuja, To Kill a Tiger is a 125 minute documentary that focuses on Ranjit, a farmer in Jharkhand, India, who takes on the fight of his life when he demands justice for his 13-year-old daughter. On the night of a family wedding, she was dragged into the woods and gang raped by three men. In a nation where a rape is reported every 20 minutes and conviction rates are less than 30 percent, Ranjit’s decision to see the accused be brought to justice, is virtually unheard of, and his journey unprecedented. With tremendous access to all facets of the story, To Kill a Tiger charts the emotional journey of an ordinary man thrown into extraordinary circumstances—a father whose love for his daughter forces a social reckoning that will reverberate for years to come. To Kill a Tiger was named Best Documentary Award at the Palm Springs International Film Festival; the Amplify Voices Award for Best Canadian Feature Film at the Toronto International Film Festival and the Inspiring Voices and Perspectives Feature Film Award at Cinéfest Sudbury. A Notice Pictures and National Film Board of Canada Co-Production, To Kill a Tiger screens only once during VFF on February 9 and 6:15PM at the Blue Bridge Theatre.

Waiting for Raif is the tragic tale of a family torn apart by the intransigence of an absolute monarchy. Shot over an eight-year period, the film tells the inside story of Ensaf Haidar’s inspiring fight to free her husband, the famous Saudi dissident Raif Badawi. Accused by the regime of insulting Islam, in 2012 he is sentenced to 10 years in prison and a thousand lashes—a barbaric punishment that provokes international outrage. Throughout his imprisonment, Ensaf, who arrived in Quebec as a refugee in 2013, leads a remarkable campaign for his freedom, with courage and determination. Year after year, she watches her children grow, far from their father, without knowing when the family might be reunited. The film offers a privileged and moving look at the personal and political implications of the Badawi affair, lays bare the West’s contradictions with respect to Saudi Arabia, and follows the challenges faced by a young woman both in her adopted land and on the global stage.

Directed by Luc Côté and Patricio Henriquez and running 150 minutes, En attendant Raif/Waiting for Raif is in Arabic, French and English and is a Macumba Média Inc. and National Film Board of Canada co-production. It screens only once on February 6 at 1:00PM at the Capitol 6 Theatre.

Last, but far from least is A Motorcycle Saved My Life, from award-winning Vancouver-based filmmaker and the President of Violator Films, lori lozinski. In this 12-minute short, the open road presents a point of departure allowing lozinski to process deep-seated grief. Revisiting the formative experiences that drove her ambition, she examines the influence of her parents in the present light of day. It is in unpacking these recollections at full throttle that the ordering of memory becomes justified. Her motorcycle’s intractable hum disrupts the solitude of Northern Alberta’s vast farmland–a place where childhood was rife with paternal expectations. Connecting to her mother’s youthful spirit, an opportunity emerges to see herself anew. A delicate and personal ode to the complexities of how we sit with our history after loved ones have passed.

A Motorcycle Saved My Life is bundled with 6 more short films from Canada, Spain, Australia and the United States in a shorts program that screens February 11 at 7:3PM at the Prince of Wales.

In addition to these four NFB productions there are 23 other Canadian films at VFF 2023 including Brother, The End of Sex, Viking, Riceboy Sleeps and Bones of Crows. There are 32 international features on the schedule as well. VFF runs from February 3 to 12 and there is more information online.