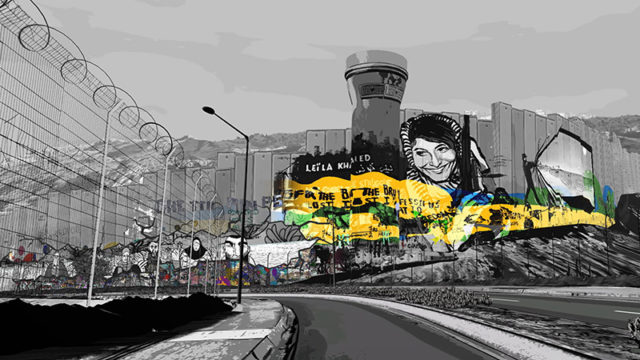 NFB Builds a Wall
by Staff

(July 30, 2018 – Toronto, ON) We live at a time when walls of various kinds are being thrown in the path of democracy. Sometimes the wall is part of the madness of the man in the White House and takes the form of a paper tiger, puffed up policy that imposes tariffs and bans on goods and people. Sometimes it real, like the wall that runs about one-third of the length of the US-Mexico border or the wall that Israel is building, which so far consists of six barriers that separate the nation from its neighbouring countries and the West Bank and has cost more than 4-billion US dollars.

The Wall the National Film Board (NFB) has made is a feature-length animated film that will open theatrically across Canada starting August 13.

Wall was written by renowned British playwright and screenwriter David Hare, a two-time Oscar nominee (The Hours; The Reader). Wall was directed by award-winning Calgary filmmaker Cam Christiansen who is best known for his works that explore socio-political issues both at home and abroad. In Wall, Hare travels to the Middle East to examine the impact that the wall separating Israel and Palestine has had on the people of the region.

Using advanced animation tools and 3D motion-capture footage, director Cam Christiansen employs a distinctive handcrafted approach that conveys the reality of the 708-kilometre barrier as no film has before. Rich with

rhythmic, raw imagery, Wall takes an in-depth look at the “fence” that has forever united, divided and changed communities—while brilliantly capturing the emotions surrounding this massive reminder of unrest.

Revealing and passionate insights from renowned Israeli novelist David Grossman, Professor Neill Lochery of London University, Professor Sari Nusseibeh of Al-Quds University and Ramallah-based attorney Raja Shehadeh are all framed by Hare’s probing, restlessly curious mind, attuned to the incongruities and contradictions of life in the shadow of the wall.

Hailed as “a fascinating study of the Israeli-Palestinian divide… compelling” by The Hollywood Reporter when the film was presented in official competition at the Annecy International Animation Film Festival, Wall has been selected to screen at film festivals around the world since its premiere at the Calgary International Film Festival in the fall of 2017. It is screening now at Rio de Janeiro’s Anima Mundi (July 21–August 5), and will be presented next at Animix Tel Aviv (August 7–11) and the Palm Springs International Animation Festival (August 22–26).

Produced by the NFB’s David Christensen and Bonnie Thompson, Wall will have a special screening in English in Montréal for Cinemagique members at 6:30 p.m. on August 13 at the Cinéma du Parc. That screening will be followed by a Q&A via Skype with director Cam Christiansen. It will then open on August 17 at the following venues: Cinéma du Parc, Montreal (English); Cinémathèque québécoise, Montreal (French); Globe Cinema, Calgary, with director Q&A and at the Vancity Theatre, Vancouver. The NFB expects to announce other cities and venues soon.

Click here to learn more about director Cam Christiansen and follow the link on that page to watch a trailer for Wall.

The image and poster courtesy of the National Film Board (NFB).