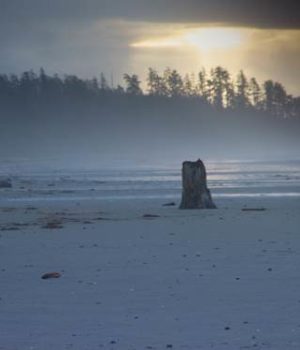 Debris is a moving portrait of Tofino, BC, intertidal artist Pete Clarkson as he crafts an evocative memorial to victims of the 2011 disaster, primarily out of mangled timber washed ashore from the other side of the ocean. In Clarkson’s caring hands, the remnants of the lives and homes of people from Japan’s Tohoku region take on new meaning as he shapes them into

a poignant public sculpture. The result is a site of remembrance and contemplation, and an emotional bridge connecting an artist, his community and a people an ocean away.

Debris had its world premiere this past September at the Vancouver International Film Festival and went on to screen at festivals in Montreal, Paris and Torino, Italy.

Written and directed by John Bolton, Debris is produced for the NFB by Shirley Vercruysse, with Teri Snelgrove as associate producer. The film is edited by Jenn Strom, with Andrew Coppin as director of photography. The composer is Scott Morgan, with sound design by Chris McLaren. The executive producer for the NFB’s BC & Yukon Studio is Shirley Vercruysse.

Bolton is an award-winning filmmaker based in Vancouver. His company has produced performing arts pieces, literary adaptations, sports films and the occasional disaster movie. He is currently producing, writing and directing several projects, including the musical docudrama Aim for the Roses about Canadian musician Mark Haney and Canadian daredevil Ken Carter. Projects in development include E Day Is Coming, a seismic comedy about earthquake preparedness and real estate anxiety in Vancouver, and Snowman, a hallucinatory black comedy/psychological horror film based on the play by Greg MacArthur.