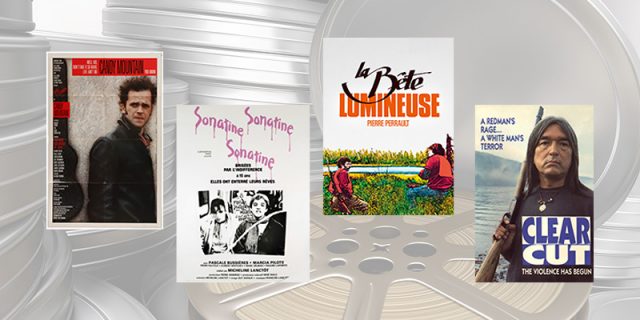 (July 12, 2021 – Toronto, ON) Editor’s Note: The following article was originally published late in 1994 in Issue 4 of Take One Magazine. Please keep this in mind when reading as any reference it contains to time, for example, will seem badly out of date. We offer it here as an historical perspective on the state of Canadian film 27 years ago and one writer’s opinion about 9 specific films. The original article listed members of the cast and crew before discussing each production’s merits, but we have deleted that content as we have provided links to each of the films covered in this article. Northernstars acquired the digital assets of Take One in 2007, two years after it had ceased publishing.

(Winter, 1994 – Toronto, ON) Considering how difficult it is to see Canadian movies even under the most generous of circumstances, this admittedly is something of an exercise in hair–splitting. Nevertheless, there are certain Canadian movies that, for one reason or another, are even less visible than most and which, in many cases, are infinitely superior to the chosen few that do enjoy some form of fleeting notoriety. Therefore, what follows is a highly subjective account of some of the undeservedly lost Canadian movies of recent years: those films that, after a festival screening or two, simply dropped through the floorboards of our cultural memory. 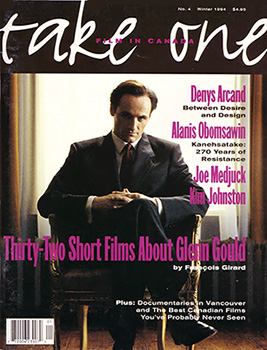 A group of men depart for a weekend hunting trip in rural Quebec. Among them is a man—an earnest, philosophical teacher/poet—who is so out of place in this macho roundelay of drinking, swearing and shooting he soon becomes an even more pathetic victim of hormonal persecution than the moose the men have come to kill. By film’s end, he will be subjected to forms of systematic humiliation that, ugly as they are, speak volumes about the conforming agenda that motivates so much ritualized male bonding. Interesting as that may be, it’s nothing compared to the fact that this remarkable, virtually unseen film is not a dramatic feature but a documentary, a kind of real–life Deliverance, even more disturbing for its closer proximity to actuality. Directed by Pierre Perrault (Pour la suite du monde) the near–legendary Québecois poet, filmmaking and anthropologist, La Bête lumineuse sunk without a trace after its debut at Cannes, and it isn’t hard to see why: this film suggests there’s something fundamentally ugly in our cultural conception of masculinity, something that makes sport of attacking anything that refuses to play by the rules.

Dances with Wolves this ain’t. The mere presence of Graham Greene in Clearcut, a ruthless, blood splattered adaptation of M.T. Kelly’s novel “A Dream like Mine” merely underscores what it was about this quickly disappearing film’s message so many clearly didn’t want to hear. Directed by Polish émigré Richard Bugajski (the banning of whose anti–government film The Interrogation drove him to leave his country in the first place), the film attacks the smug liberal pieties of so many moves about racial issues by daring to suggest that sometimes action, and violent action, speaks far more eloquently than words. And words are what its central character, a Toronto attorney representing a native community in a logging dispute, can’t seem to stop spewing. Even when kidnapped by a sinister native man (played terrifyingly by Greene) determined to mete out a little overdue payback to white society, our “hero” (Ron Lea) keeps on trying to do what it is he’s been trained to do at least since law school: negotiate, reason and compromise. Not here pal, and that’s what probably consigned this flawed but daring film to instant oblivion: far from posting liberal tolerance as part of some sort of solution, Bugajski sees it as a big part of the problem.

In tone, this is an odd throwback to the restless road cinema of the late 1960s and early 1970s, and in narrative terms a curious reversal of the east–west trajectory of Goin’ down the Road. Beat recluse Robert Frank’s movie (his first in years) may be the only film to see eastern Canada as a mystical place—a wind–whipped Oz where reclusive geniuses retreat and callow acolytes follow. Kevin O’Connor plays a morose but ambitious young musician determined to track down a Salingeresque guitar maker played by Harris Yulin (playing Frank, one supposes). As usual with such fare, however, the final destination is ultimately far less significant than the scenery along the way, which in this case includes low key encounters with everyone from Tom Waits to Leon Redbone. Languid but oddly absorbing, this is the missing link between Donald Shebib and Bruce McDonald.

This film is one of the key documentary experiments of the last decade and is virtually unknown outside of Quebec. Operating from the assumption that the Conscription Crisis of the First World War was one of the defining moments in 20th–century French–English relations in Canada, director Richard Boutet embarks on a cinematic exploration of history that is every bit as interested in issues of form as it is fact. Not that the two are even remotely separable, of course, which is the film’s point. By combining such conventional documentary elements as first–person testimony and stock footage with staged cabaret and dramatic sequences, La Guerre oublée is a pointed investigation of the epistemology of history itself: who makes it, who records it and how those modes of recording structure what it is we remember. In other words, far from a self–indulgent exercise in bending documentary aesthetic (which is does admirably anyway), Boutet’s film is also about the role documentary itself has played in the long, hesitant march of 20th–century Canadian history.

An obsessive account of obsession, A Life was shot over the course of six years, and edited with a formal precision that recalls Robert Bresson in a particularly dark mood. Frank Cole’s wordless account of a soul unhinging isn’t just one of the stranger personal movies of the past decade, it’s one of the most radical expressions of that time–worn Canadian theme, the alienated individual. Featuring the director as a man who spends the first half of the movie obsessively sealing an empty apartment following a woman’s departure, and the second half lost and wandering the Sahara (which is where Cole perilously filmed it), A Life replicates the often frankly disturbing experience of being trapped inside someone else’s neurosis. Thus, while it’s hardly pleasant or inviting, it definitely exerts a distinct, compulsive allure. Original, difficult and miraculous simply for its existence (how did this guy get it made?), Frank Cole’s A Life stands as the most extreme expression of the solipsistic impressionism that swept over English–Canadian independent films during the 1980s. Imagine Atom Egoyan without the warmth.

A Canadian riff on Herzog’s The Enigma of Kaspar Hauser, Patricia Gruben’s first feature is about an accident victim (Lillo) found wondering in the mountains near a plane crash site. Taken to a hospital, the mute Mr. Bones (so named for the bones he clung to when picked up) proves absolutely resistant to all tests based on logic, reason or even speech, but utterly responsive to such “nonsense” as games, puns and sing–a–longs. In other words, Mr. Bones’s experience, whatever it was, has effectively loosed his moorings from the bounds of empirical thought, which makes the agents of official reason, such as the doctors and the police, determined to dismiss him as simply crazy. Not so Gruben, who sees in this character a possibility for alternative forms of reason and perception; he’s kind of a rebel without a clue. Like La Bête lumineuse, a film about language and power, Gruben’s Low Visibility is obviously more whimsical and allegorical, but no less provocative for its implications.

Considering the entrenched Canadian predilection toward states of disenfranchisement, it’s no surprise that so many of our movies, from Nobody Waved Good–Bye (1964) to Family Viewing (1986), have been about teens, a cultural sub–group for whom such comprise is a way of life. But Sonatine, former actress Micheline Lanctôt’s second feature, marks some distinct territory of its own. The story of two upper–middle–class teenage girls who have allowed their sense of social detachment to swell to a purple romantic impulse, Lanctôt’s film may be understanding of the girls’ condition (and God knows, their lives are rendered pretty bleak), but it never quite separates their plight from the realm of self–indulgent, bourgeois behaviour. It is, in other words, much less an attempt to pander to inchoate adolescent rebelliousness than a critical examination of both it and the society that makes it almost necessary. Austere, but often powerful.

Most good road movies value journey over destination, and all are, to one extent or another, about how those journeys alter the most fundamental assumptions of the traveller’s world view. Perhaps this is why the road movie is a narrative form that seems to come as naturally to Canadians as Westerns (another form of road movie altogether) come to Americans, and certainly this is why, stripped to its barest formal elements, the road movie can provide the basis for as eloquent a meditation on perception itself as it does in Chris Gallagher’s Undivided Attention. While following a couple across the country in a top–down coupe, the movie makes numerous pit stops at the outer limits of seeing itself. Strapping cameras to everything from typewriter carriages to shovels, Gallagher’s absorbing, feature–length non–narrative constantly forces us to question the authority of our own perceptions—it de–centers our confident subjectivety. It places all points of view on an equal level, which allows us to consider the extent to which identity itself is determined and reinforced by the position one looks from. And if that is too abstract, consider this: Undivided Attention is also a helluva visual trip, well worth it, even if only for the ride.

This article by is reprinted from a 1994 issue of Take One. Geoff Pevere is an author, movie critic and broadcaster. Northernstars.ca acquired the digital archives of Take One Magazine in 2007.