Death of a Ladies’ Man – A Review
by Ralph Lucas – Publisher

(March 12, 2021 – Toronto, ON) Death of a Ladies’ Man is a bit of a romp. Its appeal should be wide, after all it is inspired by the songs of Leonard Cohen and stars the enormously gifted Gabriel Byrne supported by a solid cast. Further it is set in Montreal and there are just enough landmarks to remind former inhabitants or visitors what a wonderful city Cohen’s hometown was and still is. It’s also set in rural Ireland—Byrne was born in Dublin—and as we approach St-Patrick’s Day it is safe to assume for the next little while we’re all going to be Irish.

You might expect there would be some Cohen music along the way, and you would be right. What you might not expect is a few dance routines based on his songs that serve to support the story line but also add moments of lightness to what can be in places a rather weighty story. In one routine you may find your emotions tugging at your tear ducts.

Byrne plays the titular ladies’ man, Samuel O’Shea, who has spent years fuelling his sexual carousing with too much alcohol. We learn early on this has, or may have contributed to an unhappy diagnosis, which provides the foundation for the visions he sees and we all experience. His doctor is played by Pascale Bussières, but it’s a small role and this isn’t a medical story. 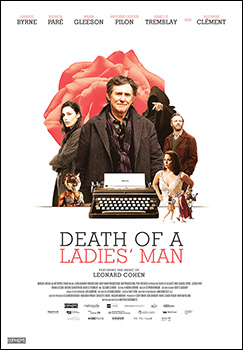 You might also think this is some moral parable set to the tune of Hallelujah, but it isn’t quite that either. The perils of drink and its withering impact on life are clear, and includes an ex-wife (Suzanne Clément) and the kids (Karelle Tremblay and Antoine Olivier Pilon) who have been spun out of a family relationship but are still held in place by the gravity of love. And ultimately that’s what this is.

The past life of Sam O’Shea is broadly hinted at and we’re reminded time and again that he has been a faithless husband and a serial consumer of passion. Now, late in life, too late in life, he succumbs once more to his dreams, portrayed by Jessica Paré, just as his family needs him most.

I won’t ruin the surprise ending but will close on a thought I had almost immediately after watching the screener provided by the film’s distributor, Mongrel Media. In addition to Cohen’s music, there’s a word here and there that might remind you of the poet, novelist, singer and songwriter, but if you took all that away the central story onto which the music has been added is strong enough to stand on its own. The music is a terrific bonus and writer-director Matt Bissonnette has used it well but of greater importance, at least to me, is the story itself and it’s one heck of yarn, well told, well played and well worth seeing.