(July 16, 2021 – Toronto, ON) The July release of Taylor Olson’s Bone Cage and Nicole Dorsey’s Black Conflux acts as an apt illustration of the kind of fearlessness known to independent Canadian filmmakers.

Bone Cage and Black Conflux are arguably two of the best Canadian feature films of 2021, but their themes of toxic masculinity shaped within the sluggish boundaries of a small-town render them a tough sell. And with a summer box-office favouring cars that are furious, purges that are forever, and black widows that are marvels, chances are high, if not guaranteed, that these films will go unnoticed.

But Olson and Dorsey, both coming out of the Maritimes—Olson from Nova Scotia and Dorsey from Newfoundland—and making their feature directorial debut demonstrate a guileless act of bravery by choosing to make cinema an experience rather than a distraction. And though their efforts don’t translate as typical summer fare, they do work to better serve the story. 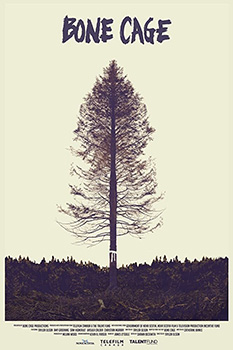 Bone Cage director Taylor Olson also stars as Jamie, a young man whose livelihood demolishing forests for a pulp mill conflicts with the quiet reverence he has for the land he calls home.

Jamie works the harvester, a massive machine that rips through the forest as though it were a robot bent on destruction, and Jamie, the mad scientist working the controls. With the workday complete, Jamie scrounges through the wake of his destruction finding wildlife left injured or dead. Olson (as director and actor) delivers a stunning contrast between Jamie as the benevolent saviour of small animals and of him tearing up the earth like an angry god.

Olson adapts Bone Cage from Catherine Banks’ Governor General award-winning play of the same name. Despite the ominous genre-sounding title, Bone Cage is a quiet, evenly paced drama. It’s been suggested that the title refers to a rib cage as a metaphorical prison trapping Jamie’s internalized notion of masculinity. That seems fitting, given Jamie’s display of anger, insensitivity, and childishness. He despises his stepfather (Christian Murray) who is incapable of accepting the death of his son and he is relentless in ridiculing his friend (Sam Vigneault). Only his half-sister, Chicky (Amy Gorening) is immune from his wrath and ridicule.

The sum of Jamie’s life choices surfaces days before his marriage to fiancé Krista (Ursula Calder). Krista is euphoric, and Jamie responds in kind, but underlying their excitement is a sense from Jamie that marriage marks an ending rather than a beginning. If Jamie is at all resigned to a life of routine, his hopes are dashed by rumours that he will be taken off the harvester and put on the chainsaw. Jamie decides to make changes. But his actions are compulsive, riddled with uncertainty, and only further erode his stability.

In one of the film’s more moving moments—a scene encompassing both the amusing and the tragic—Jamie negotiates the steps needed to become a helicopter pilot in B.C. His struggle to maintain dignity even as he realizes his dream are slipping away is heartbreaking.

There is much in Bone Cage that harkens back to films like Paperback Hero (1973) and Nobody Waved Goodbye (1964) in ways of highlighting character over plot. Much the same can be said of Nicole Dorsey’s Black Conflux. 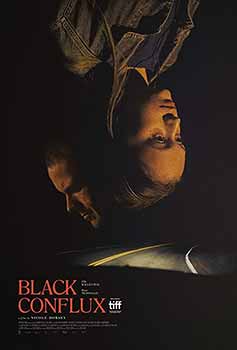 If Black Conflux is the better of the two films, it’s only because Black Conflux, which Dorsey wrote, has the narrative advantage of suspense. The stakes seem higher even though both films lead into unforgettable final scenes.

Set in Newfoundland, 1987, Dorsey tells the story of two seemingly unconnected people. Jackie (Ella Ballentine), a vulnerable 15-year-old girl, and Dennis (Ryan McDonald), an unstable 40-something man, live in the same town but have not met. But they will meet, and it’s on that inevitable meeting that director Nicole Dorsey hinges the lure of her narrative.

Jackie is torn between joining the school choir competition or testing out her boundaries by hanging out with friends. Tragedy has left Jackie in the care of an aunt who, although not unkind, has questionable talents as a caregiver. Without a proper guardian, Jackie is left alone to maneuver her way towards independence.

Dennis has a vivid fantasy life that warrants concern. Dennis imagines a truck full of women, each of them waiting to fawn over him as he flexes a presumed authority, flaunts his cavalier disregard for their attention, and demonstrates the manly way he shuns protocol by openly drinking a beer at work. As his visions mutate into conversations, suspicions fall as to whether these fantasy women may not be just fantasies but women who have crossed his path before, with fatal results.

Dorsey doesn’t set Jackie and Dennis loose to play out their scenes until fate decides their paths should collide. Instead, Dorsey positions the audience as helpless witnesses to the step-by-step choices and random decisions that inevitably lead to their meeting.

It’s unlikely Black Conflux or Bone Cage will make July’s top box-office winners list. But what these films lack in the summer hoopla of Kick-Ass superheroes and souped-up Mustangs, they make up for in riveting performances and storytelling.

We’re All In This Together

Portraits From a Fire