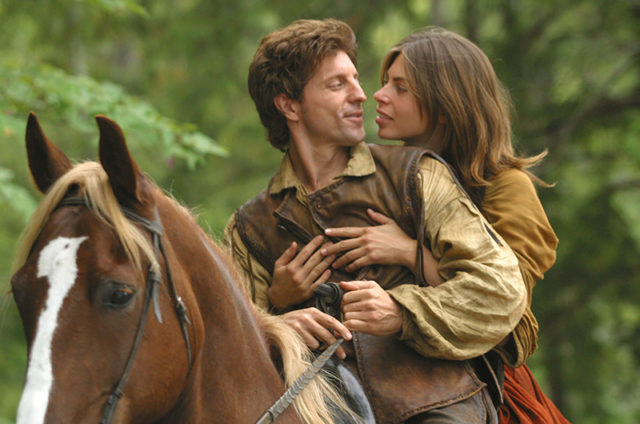 In 18th-century Quebec, one dark, misty night, France Carignan pays a visit to the dying Curé Blondeau. As the young woman and the old priest discuss their shared past, a story that marked both of them begins to unfold.

It’s 1758, just before England’s conquest of French Québec. When she was young and defiant Marie–Loup, France’s mother, meets handsome François Le Gardeur (David La Haye) in Québec City’s marketplace. Le Gardeur comes from a well–off family, but he would rather roam and hunt than bask in middle–class comforts. Marie–Loup, an illiterate carpenter’s daughter, knows her way around a forest, practices herbal medicine and has Native friends. Many of the locals, particularly a trio of scornful hags, egged on by their ringleader Hortense, think the girl is a witch.

François and Marie–Loup (Noémie Godin-Vigneau, pictured above) fall in love instantly. Meanwhile, the dashing woodsman discovers that his recently deceased father engaged in sleazy dealings with the corrupt Intendant Le Bigot and left behind a financial mess. More than ever, François craves the simple honesty of nature, embodied for him by Marie–Loup. In contrast, Curé Blondeau admonishes Marie–Loup for her liberated behaviour, but it’s obvious that he too loves the girl in his miserably, repressed way.

The priest meddles in François and Marie–Loup’s affairs, manipulating and deceiving the lovers. Thinking that François is deserting her, she marries the nasty Xavier Maillard. Horrified by France’s abandonment of Québec to gain, as some wag puts it, “a couple of islands in the sun” in the Caribbean, François sails off to the motherland to plead for more support for the beleagued colony. However, it’s a lost cause. The French ruling elite are not prepared to save a colony they have no real interest in. Returning home, François yearns more than ever for Marie–Loup, and the feeling is mutual. Confrontations between him and the dangerously violent Xavier ensue; however, Les Habitants can not stop General James Wolfe, who leads the British army to a stunning victory on the Plains of Abraham.

Later Xavier is killed, and Marie–Loup and her father are falsely accused. François defends his love, but as a sop to the Church, the British military court convicts her. Marie–Loup confesses and is sentenced to be hung, then locked in an iron cage that is suspended from a pole. The day she is paraded through the streets in her cage, Hortense and her vulturous friends smile contentedly. The film returns to France’s nocturnal meeting with the Curé. She reveals that she, not her mother, killed Xavier during a drunken sexual attack. Marie–Loup died protecting her child; knowing the truth, Blondeau can now die in piece. Cue in Céline Dion, who sings “Ma Nouvelle France” over the end credits.

Determinedly ambitious, gambling $33 million in the hope of achieving box–office grosses in the same league as last year’s hits Séraphin and Seducing Doctor Lewis, Nouvelle–France only intermittently comes alive. As a Montreal journalist put it after the its November release, the film could be summed up by the expression, “Qui trop embrace mal étreint” or “He who grasps at too much loses everything.”

Not only are veteran director Jean Beaudin (J.A. Martin photographe) and mega-producer Richard Goudreau (the brains behind the very lucrative Les Boys series) seeming to be biting off more than they can collectively chew, Quebec critics complained that Nouvelle–France, which is billed as a “fresco,” is far from a sweeping picture of Old Quebec during the time of the Conquest. While it offers some spectacular vistas conjured up by veteran cinematographer Louis de Ernsted, it rarely has the grandeur, or the poetic intensity, of an epic. 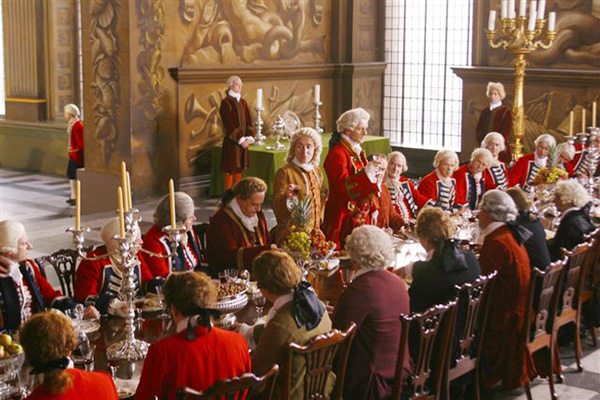 Embarrassingly, Quebec critics gleefully mocked the fact that the penultimate event of Quebec’s traumatic defeat on the Plains of Abraham—the actual battle—does not appear on screen in this expensive movie, the biggest production budget of any Canadian feature to date. According to Goudreau and Beaudin, they simply couldn’t afford to shoot it. In fact, this international co–production did suffer from major funding problems, but Nouvelle–France without the battle of the Plains of Abraham (the single largest and most important land battle in North America prior to the U.S. Civil War) is like The Ten Commandments without the parting of the Red Sea, Lawrence of Arabia without the assault on Aqaba, or the Titanic without ever seeing the ship go down. A sweeping historical movie configured to be a mainstream hit must deliver on the obligatory big scenes.

As for François’s (David La Haye) and Marie–Loup’s (Noémie Godin–Vigneau) love story, the actual focus of this two–hour plus movie, it is so bland and lightweight, it infuriates viewers sensitive to their history. ”What do they take the Québecois viewer for?” snapped Montreal critic Richard Bégin. “A poor idiot who fears his past to the point of substituting fluffy little stories for it?” In the role of the picture’s male lead, the usually nimble La Haye’s grinning Le Gardeur would be at home on the cover of a drugstore historical romance. And like her amant, Marie–Loup shows few signs of the funky wildness her character is supposed to have. Godin–Vigneau is so well–coiffed and made up, she seems worried whether she can make it to the Boulangerie Premiére Moisson before they run out of croissants. Together, Godin–Vigneau and La Haye could be sipping white wine at a cinq à sept or gamboling through a deodorant commercial. 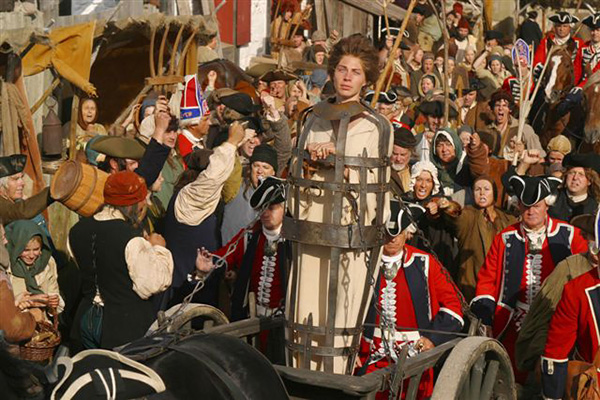 The Nouvelle–France project has a long history. Years ago, Gilles Carle, another veteran of the Quebec movie scene who directed the historical romance Maria Chapdelaine in 1982, and Richard Goudreau were developing a movie about a legendary Québecois femme fatale known as La Corriveau. Part historical figure, part fever dream, this 18th–century woman was convicted of murdering several husbands. The project fizzled, however, when Goudreau began nudging the material in a different direction. Even if he hadn’t, Carle’s ability to handle such a big movie became less and less likely as he became increasingly debilitated by Parkinson’s disease. The story of La Corriveau became, in a script by Pierre Billon (co–author of the 2003 megahit Séraphin), a movie with few hints of the Gothic menace Carle had in mind. With Billon’s formulaic script, Nouvelle–France sanitizes the passions it trades in.

Jean Beaudin, who has visited the Québecois past many times before in films such as the Cannes–winning J.A. Martin photographe (1977) and Cordélia (1980), and the hugely popular television mini-series, Les Filles de Caleb (1990–91), was a logical choice to direct Nouvelle–France. Unfortunately, his approach is far too tame. One can only imagine how Terrence Malick will handle similar material in his upcoming picture, The New World, which imagines the founding of Virginia’s Jamestown Settlement in 1607, overlaying history with the legendary romance between British soldier–of–fortune Captain John Smith and Native princess, Pochahontas. The movie’s trailer suggests that Malick is conjuring up the brew of lyricism and danger, not to mention surprises—something that Nouvelle–France is sorely lacking.

This review originally appeared in Take One Magazine Issue 49 in March of 2005. Northernstars acquired the digital archives of Take One in 2007. Maurie Alioff is a film journalist, critic, screenwriter and media columnist. He has written for radio and television and taught screenwriting at Montreal’s Vanier College. A former editor for Cinema Canada and Take One, as well as other magazines, he is affiliated with the Quebec media industry publication, CTVM.Info. His articles have appeared in various publications, including Canadian Cinematographer, POV Magazine, and The New York Times.

Some Things That Stay