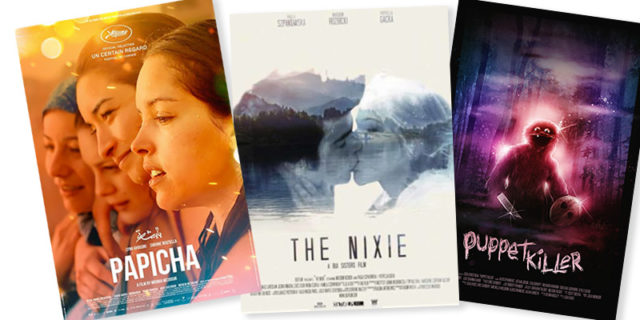 (November 1, 2019 – Toronto, ON) While there are a number of large “international” film festivals scheduled for November, in Canada, most of the largest cities have had their large festivals and beginning this month attention shifts to smaller festivals, usually dedicated to a specific area. One of the them, the International Diaspora Festival opens today in Toronto. It actually opens with a special book reading today and the films screen tomorrow and Sunday. As they state on their website, the “DFF provides Toronto audiences with an opportunity to experience the cultural mosaic of the present world through the medium of cinema.” There is a link to our November film Festivals list at the bottom of this article.

The Female Eye is one of our favourite festivals. As festival founder Leslie Ann Coles says on their website, “We are thrilled to showcase so many talented women, most of whom are writers, directors and producers! We feature films from around the globe – including Iran, Greece, Armenia, India, Russia, Ukraine, Israel, Italy, Ireland and the UK – and films from all across North America.” 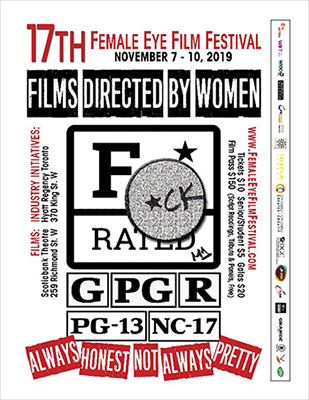 The Female Eye is raising some eyebrows with its “F-rated” poster this year. F-rated is a new classification system introduced to highlight work by women – on screen and behind the camera. The festival will host a discussion of the topic during this year’s FeFF Roundtable. In a media release the festival states “Although not recognized by the Motion Picture Association of America (MPAA), the F-rating has been widely adopted, by IMDb, Netflix, theatres and festivals alike. While its intended purpose is to raise the profile of movies written by, directed by and starring women, we question whether this helps or harms our efforts to achieve gender parity in film. The Directors’ Roundtable aims to develop industry feedback on this issue facing women in screen-based media.” This is a special event that will be held at the Hyatt Regency Hotel, King Street Balcony. Tickets are $20.

The festival itself features more than 75 films directed by women. The Opening Gala is Murmur directed by Heather Young, which was the winner of the 2019 FIPRESCI Discovery Prize at the Toronto International Film Festival. Next year the festival will move to March to intersect with International Women’s Day (IDW).

At the Silver Wave, the focus is on its home province but that isn’t a strict rule. As they state on their website, the “Silver Wave Film Festival (SWFF) screens feature films, documentaries and short films shot in the province and produced by New Brunswick filmmakers. It also showcases some of the best film and videos from Canada and around the world.” Their Opening Gala is titled Entropic, it’s a first feature by writer/director R. W. Gray and the New Brunswick based Frictive Pictures. It’s an adaption of the title story from Gray’s 2015 award-winning short story collection.

Later in the month look for some truly specific film festivals, such as the Pomegranate Film Festival in Toronto. Now in it’s 14th year, it’s a unique community event celebrating Armenian inspired film. Billing itself as Toronto’s longest running free community film festival, The Regent Park Film Festival is dedicated to showcasing local and international films. Their website states “The films we present break stereotypes and show that no one place or person has just one story.” The Regent Park Film Festival is in its 17th year and offers year-round programming at no cost.

Toward the end of November look for the Blood in the Snow Canadian Film Festival, which runs from the 21st to the 26th and offers “six days of screenings of premieres of Canadian genre (horror, sci-fi, action and thriller) features, shorts and web series. Finally running from November 22nd to the 30th Cinéfranco attracts thousands to its schedule of French language films from Canada and around the world.

Click here to find links to these and other November 2019 film festivals.

This Winter on CBC