(July 10, 2017 – Toronto, ON) The Willson Oakville Film Festival wrapped on June 25, but over the weekend we received news that festival organizers had announced the winning films for the 2017 Audience Choice Awards. Two awards are provided annually in the categories; Feature Length Film or Documentary, and Short Film.

This year, the film festival screened 19 feature length films and documentaries and 25 shorts, and the race for a winner in each category was tight. Some clear favourites quickly rose to the top of the ballot count, but in the end, two excellent Canadian-made films were nominated.

In the short film category, The Talk was selected as the 2017 Audience Choice Award Winner. The screening of The Talk at the Oakville Film Festival marked the Canadian Premiere for this 12-minute film which follows two parents as they try to navigate through the most uncomfortable conversation of all; the sex talk with their teenage daughter.

“Thank you so much to the Willson Oakville Film Festival for this great honour,” said the film’s writer and producer, Tanner Sawatzky. “It was an absolute privilege to have been selected, yet alone win the Audience Choice Award for Best Short Film. It was the first time we got to see our film play on the big screen and it was such a joy to listen to the laughs and the chuckles from the audience, beginning to end. Having the chance to screen our film in Oakville meant a lot to us, being that myself, Tyler Boyco, and the majority of our crew all met at Sheridan College just down the street. This was a film Tyler and I had been longing to do, but I 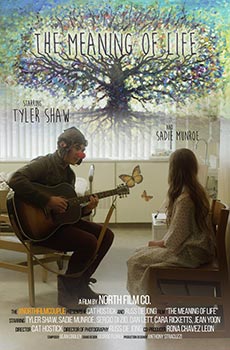 think I speak for both of us when I say we couldn’t have done it without our incredibly talented cast and crew. It’s festivals like yours that give us a chance to showcase our hard work and tell our stories.”

In the category of Audience Choice Award Feature Film or Documentary, the Oakville-shot feature The Meaning of Life was selected as the 2017 Audience Choice Award Winner. This film follows the story of a struggling musician as he learns about life from a terminally ill nine year old girl he has been hired to entertain. The film stars musician Tyler Shaw in his first film role, who charmed the audience before the screening with a special live musical performance. Previous to its’ Canadian Premiere at the Oakville Film Festival, The Meaning of Life had its World Premiere at the Dances with Films Festival, where it screened at the famed Chinese Theatre in Los Angeles.

Director Cat Hostick won Director of the Year for this film at the Canadian Urban Television Awards. Speaking on her time spent with the Oakville Film Festival, Hostick revealed; “We are so blessed on winning best feature – never would have guessed. The whole process from filming in Oakville to having our Canadian premiere here has been so enjoyable… what a way to top it off! Thank you Oakville and the 450 people who came out to our screening! We look forward to the next one!”

Both awards were sponsored by Film.ca Cinemas.