Back in the early 1970s a radio colleague announced that he would soon be getting married and would then leave Canada not just for a honeymoon but forever. He was sorry he had not seen much of the country and we talked about maybe being able to get in a quick road trip while there was just enough time. I casually mentioned to another friend that I was thinking of driving my constantly complaining, ancient and well-traveled Volvo Canadian from Toronto to Vancouver and back in the space of the next two weeks and he asked if he could come along, and if he could bring his dog. And so the three of us, and the dog, set out and we made it there and back, just.

In late 2007 I shot a documentary about a group of cyclists riding through the Rocky Mountains from Calgary to Vancouver, and so with that as background I approached One 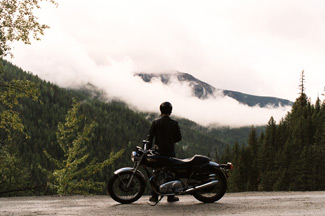 Week being relatively familiar with the territory. At least the physical landscape covered in the film.

I’m not exactly sure what producer-director-screenwriter Michael McGowan had in mind, but I’m fairly certain it wasn’t a travelogue. Unfortunately that’s what much of the film feels like and that’s what the distributors capitalized on and promoted, asking Canadians to contribute their own iconic images of the country to the One Week website. The film became a bit of a sensation chalking up well over one million dollars at the box office within a few short weeks of its opening. It had become a bona fide Canadian hit movie.

Of course there is more to the story than just a motorcycle ride across the country, but there isn’t sufficiently enough more to raise One Week to the level of other great road movies. This 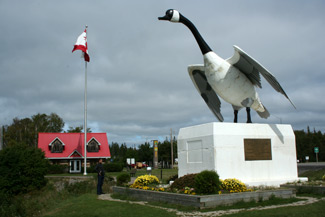 is no Easy Rider. This is no Goin’ Down the Road. But then it was never meant to be. The basic premise comes in the form of a question: What would you do if you knew you only had a short time to live?

Most of us would, I suspect, face the near future stoically and go as gently as possible into that good night despite our natural inclinations. Ben Tyler (played by Joshua Jackson) decides to buy an old motorcycle and set out for points west at the urging of a roll-up-the-rim-to-win coffee cup suggestion. At this early point in the film you know One Week isn’t going to take itself too seriously, and thankfully it doesn’t. Which is its great achievement.

Facing that unanswerable question about facing death, McGowan essentially casts it aside and deals with what you could do if you had a life. The journey in the film, like life itself, has a beginning and an end and so it is unmistakably a shallow 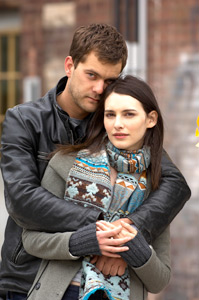 metaphor. It has its ups and downs, and potholes, and detours, and good days and bad days. Intercut are phone conversations with the bitchy bride-to-be (Liane Balaban) who is wasted in the role. Lucky for her career she was cast in the Dustin Hoffman film, Last Chance Harvey released around the same time. This is Joshua Jackson’s film from beginning to end, although the cast of supporting actors all have excellent if small roles and they all play their parts very well, especially Balaban.

Left behind to finish planning their wedding, Balaban’s character, Samantha, becomes more strident, more desperate, less like anyone you would want to return to if you only had a short time to live. Which helps to underscore the lure of the open road.

With the end of this movie telegraphed within its first few minutes, there are no surprises as One Week approaches Canada’s west coast and the landscape gives way to the Pacific Ocean. The end is near. As a viewer you move quickly to the last of the seven stages of grief, hope. Somewhere in this little road movie you became a traveling companion and now at the end you don’t want it to end. In this, McGowan and his cast and his great Canadian landscape succeed where weightier, larger, more complicated road movies may have failed. You have made a friend and you know you will mourn his passing and cherish his memory.

Back to the Cast and Crew of One Week