Molly Parker has built her reputation on playing strong female characters, often in challenging films. She brings an almost unconscious elegance and intelligence to each role, whether it’s a working-class pregnant South Londoner, a crippled Prairie girl during the Second World War, the spoiled socialite girlfriend of an aspiring politician, or a widow stranded in the frontier town of Deadwood.

Born on June 14, 1972 and raised on what she has referred to as “a hippie farm” in Pitt Meadows, British Columbia, Parker discovered she had a passion for acting while she was a teenager. Though she had been training in ballet since she was three years old – including three years with the Royal Winnipeg Ballet – she decided to pursue acting at 16 years old. Her actor uncle introduced her to his agent and over the next few years she won a number of small roles in television series and movies-of-the-week.

After graduating from high school, she used her acting bursaries and scholarships to enroll in a three-year course at the Gastown Actors’ Studio in Vancouver. Parker also took supplementary voice and singing lessons and continued to act, appearing on episodes of Neon Rider, The Outer Limits and The Highlander. In 1995 she was cast as Glenn Close’s daughter in the Emmy Award-winning television movie Serving in Silence and was nominated for a Gemini Award for her performance in another television movie, Paris or Somewhere. 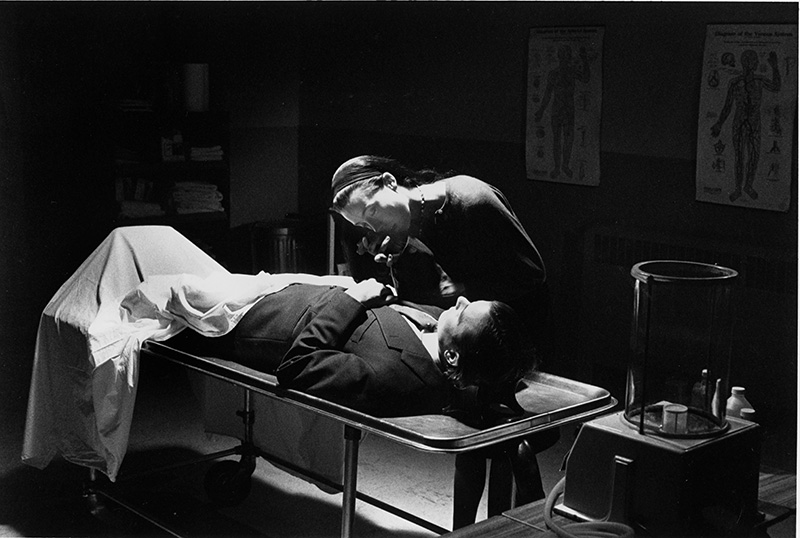 But it was Kissed, released in 1996, which really set Parker’s career into overdrive. A cinematographer friend approached her about auditioning for a role in the low-budget feature film that he was working on, and she agreed to meet with the director Lynne Stopkewich. The two hit it off immediately, and she was cast in the role of Sandra Larson, a poetic and complex girl whose increasingly obsessive desire to be close to death develops into necrophilia. Parker was able to portray Sandra as an eminently sympathetic character, challenging the natural instinct of audiences to regard her as sick or weird.

Kissed opened to rave reviews at both the Toronto International and Vancouver International film festivals. Much of the praise received by the film was for Parker’s performance. Entertainment Weekly called her “a real find, with a

hungry avidity reminiscent of Debra Winger in her prime.” Variety hailed her “sexy, moody screen presence.” Her performance was described as “compelling,” “invigorating,” “breathtaking” and “virtually luminescent.” Considering the shocking subject matter of the film, the unadulterated praise for it is even more impressive.

Kissed won Best Canadian Feature, Special Jury Citation at the 1996 Toronto International Film Festival, and Parker was awarded the 1997 Genie Award for Best Actress. Within days of its release in the U.S., her phone began ringing off the hook. Fox-TV quickly cast her as the lead in their adaptation of Dean Koontz’s Intensity, and Jodie Foster’s Egg Pictures invited her to audition for a role in their new film, Waking Up the Dead. It would become Parker’s first big-budget American feature film. She was cast as the socialite girlfriend of a congressional candidate and appeared alongside Billy Crudup, Jennifer Connelly and Janet McTeer. Around the same time, she signed with the powerful William Morris talent agency in Los Angeles, which represents superstars such as Arnold Schwarzenegger and Drew Barrymore, and was featured on the cover of Variety magazine.

As her performance in Kissed generated buzz around the world, Parker continued to work steadily, appearing in Canadian films such as Good Things Too, The Chain and Hard Core Logo, and on American television, in movies such as Contagious, Under Heaven and Titanic.

In 1998, Parker signed on to the cast of CBC-TV’s quirky six-part sitcom Twitch City, playing Hope, the eternally optimistic girlfriend of Don McKellar`s Curtis, an agoraphobic couch-potato living in Toronto’s Kensington Market. As Hope, she provided an essential oasis of stability for the show, which was otherwise populated by oddballs and weirdos. With Twitch City, she was able to show off her comedic skills, in contrast to the intense roles on which she had been building her reputation.

The following year brought Parker three dream roles in three very different films, all of which were featured at the 1999 Toronto International Film Festival. In Canadian writer/director Jeremy Podeswa’s evocative The Five Senses, she played a woman whose young daughter goes missing. In English director Michael Winterbottom`s bleak Wonderland, she played one of three lonely, working-class South London sisters. And in Istvan Szabo`s epic Sunshine, she portrayed a Hungarian Jew married to Ralph Fiennes. Each film garnered its own critical acclaim and the buzz around Parker continued to increase.

In 2000, she reunited with Kissed director (and friend) Lynne Stopkewich for Suspicious River. Parker played Leila Murray, a bored small-town motel receptionist seeking emotional release by offering herself to the lonely guests at the motel. The story becomes darker and more disturbing as Leila becomes emotionally attached to a particularly cruel john. While Suspicious River received mixed reviews, her performance was accoladed for its intensity, 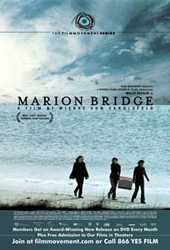 intelligence and luminosity. She was nominated for a Leo Award (BC’s film and television awards) in 2001.

And as if her role in Suspicious River wasn’t challenging enough, the following year brought Parker yet another sexually provocative film. In Wayne Wang’s controversial The Center of the World, she portrayed a musician moonlighting as a lapdancer, invited by a young computer whiz to spend three nights with him in Las Vegas. There were mixed reactions to the film, though her performance was again recognized and nominated for an Independent Spirit Award.

That same year she appeared in supporting roles in the Canada/UK co-production The War Bride and Bruce Sweeney`s Last Wedding, and was rewarded with two Supporting Actress 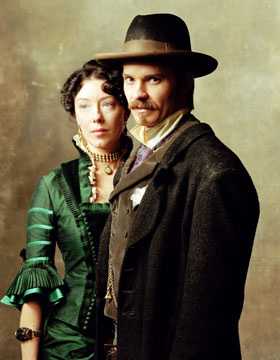 nominations at the 2002 Genie Awards. She won for her performance in the tense, playful comedy Last Wedding, as Sarah, one half of a dysfunctional couple.

In 2002, Parker appeared in five films, including two major Canadian films, the highly praised drama Marion Bridge, and the curling comedy Men with Brooms. She also played John Cusack`s wife in the flawed but compelling drama Max, about the friendship between an angry young artist named Adolf Hitler and a Jewish art dealer, appeared in the British drama Pure, in which she played a widowed single mother who becomes a drug addict, and had a small role in her partner Matt Bissonette`s debut feature film, Looking for Leonard.

Parker appeared in two episodes of the much-celebrated HBO series Six Feet Under, playing a rabbi, and then won the role of Alma Garrett (pictured at left) in the critically acclaimed series Deadwood. She completed the filming of Break a Leg, a dark comedy about a struggling actor and worked with Bissonette again in his 2006 film, Who Loves the Sun.

She has worked steadily since she was 16 years old, and all the hard work has payed off. Her star continues to rise. She currently lives in Toronto with Bissonette, but spends much of her time in London, New York City and particularly Los Angeles, where she has a close-knit circle of Canadian actor friends, including Eric McCormack (Will & Grace), Callum Keith Rennie (Suspicious River) and Sandra Oh (Grey`s Anatomy).

Parker got to work with Rennie again in the 2010 film Trigger and yet again when they were both cast in the Canada-US co-production television series The Firm which debuted in early 2012. Her role on the NetFlix hit series House of Cards increased her U.S. profile and in 2015 the writers on the series began to increase her role giving her more screen time and more development time for her congresswoman Jacqueline Sharp.

In January of of 2015 it was announced that Parker had joined the cast of one of the year’s most anticipated stage productions, Harper Regan, which was launched by Toronto’s Canadian Stage. The drama was written by Olivier Award-winning creator Simon Stephens and marked Parker’s first live theatre role in 18 years.

Parker costars in the Amazon Studios production of the series Goliath playing the role of Callie Senate: a senior lawyer at a firm that is at the centre of the story. First broadcast in 2016, in 2018 it was announced the series would begin production on its third season. Also in 2018, Parker was cast in the new Netflix series Lost in Space, a reboot of the ’60s show of the same name. Shot in and around Vancouver, she plays the role of Maureen Robinson, a respected scientist, and mother of three who is chosen to colonize space along with her ex-husband.

Molly Parker trusts her instincts, choosing complex, flawed but strong female characters, and varying her projects from small quirky films and television to sweeping historical epics. She doesn’t seek to always play leads, often choosing projects with ensemble casts. If the part intrigues her, and offers her the chance to work with people she admires, she won’t hesitate. No matter how well or how poorly received the film or the television program, she is always consistent – her talent, intelligence and beauty always shining through.

This biography is Copyright © 2018 by Catherine Solmes and may not be reproduced without prior written permission. For more information about copyright, click here.