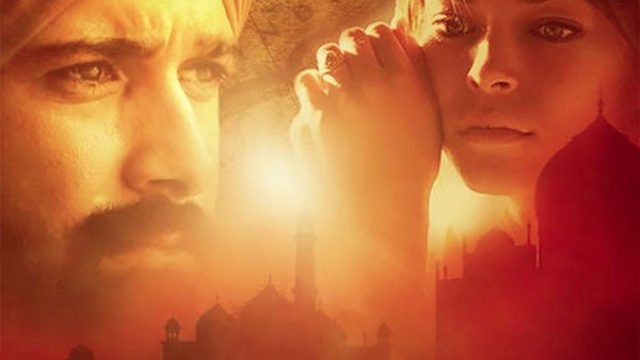 Partition – A Review
by Wyndham Wise

Vic Sarin is without question one of Canada’s top cinematographers. In a career that has spanned 30 years, he has lensed some of the most popular Canadian films, including Heartaches for Don Shebib, Bye Bye Blues for Anne Wheeler and Margaret’s Museum for Mort Ransen. As a director, his track record is rather more spotty. He started off strongly with Cold Comfort in 1989, which received a Best Picture nomination at the Genies, but recently he has helmed such films as the hysterical Christian movie about the end of time, Left Behind: The Movie, and the lightweight Deluxe Combo Platter (Love on the Side), which went nowhere at the box office.

Now he returns with the epic Partition, his most ambitious film to date, one that he co-wrote, directed and also shot based on his experiences growing up in Kashmir, the exquisitely beautiful but war-torn territory that separates India from Pakistan, during the chaotic forced partition in post-colonial India.

Gian (Jim Mistry) and Naseem (Kristin Kreuk) are lovers in the Romeo and Juliet mold. He is Sikh and she is Muslim. His people kill her father; her people kidnap her and won’t let her return to 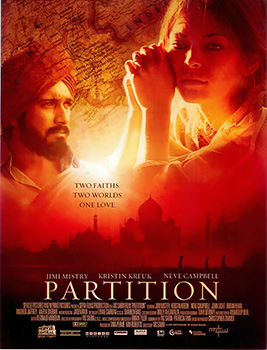 him. Simple, straightforward and rather dull because there is very little spark between Mistry and Kreuk, a very pretty ingénue from television (as Superman’s girlfriend, Lana Lang, in Smallville) who can’t act her way out of a paper bag. She is generally in the state of near-collapse, and the love scenes with Mistry are tame and without erotic tension. To make this old saw work there must be something in the performance of the leads to make it interesting. Mistry is marginally better, and he has done some good work in the past (see his comic gay performance in Touch of Pink). Here he has a couple of pained expressions and is hidden for the most part behind his full traditional Sikh beard.

Former Scream star Neve Campbell is on hand to represent the British ruling class, and interestingly has gone for the plain, British no-nonsense look of pleated skits and sensible shoes. She plays Margaret, a long-time friend of Gian’s, who helps him locate Naseem’s family, which is now settled in Lahore. She dominates the scenes she is in; however, she`s given very little to do but sit around and write letters or exchange gentle gibes with the Indian bureaucracy because of its slow pace in finding one family out of millions of refugees. 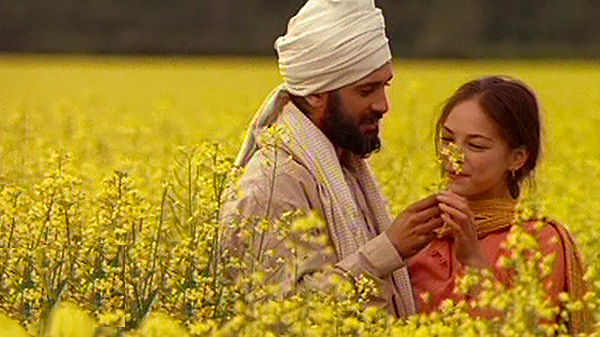 Partition is more episodic than epic. There is a connection between Margaret and Gian, which goes back to the war with the Japanese in Burma that plays out in flashbacks. He tried, but was unable, to save her brother, his commanding officer. There`s a lot of time spent on Nassem as a frightened young Muslim girl adapting to the harsh life in a village dominated by Sikhs. Then suddenly they are married and there is a quick cut to a three-year-old child. She makes the unwise decision to travel to Pakistan equally abruptly when Margaret manages to locate her family. Gian’s desperate attempt to rescue her after her brothers won’t let her return to India leads to the inevitable tragic ending.

Vic Sarin the cinematographer has come up with a handsome David Lean sort of film (think Doctor Zhivago), with panoramas of people or animals traveling somewhere, either to Pakistan or India. There are several large scenes, such as a train full of slaughtered Sikhs, and the opening polo grounds sequence, which is very well shot. It’s only when the actors open their mouths, does the film take a downward turn. The script isn’t strong enough to carry the weight of the material. The performances of the leads are too wooden and lack authenticity. It looks great, but it is predictable and treads lightly around any real colonial politics. The hasty departure by the British, leaving a poorly delineated border between the secular India and Muslim Pakistan, precipitated the mass slaughter of over one million Sikhs, Muslims and Hindus.

Partition is a rather conventional, albeit at times entertaining, account of the iconic Romeo and Juliet story, adding nothing that is really new. But the British Columbia lower mainland provides a nice stand-in for the Punjab, and Sarin’s ambition and need to tell this story – apparently he began the script in 1981 – should be applauded.

Wyndham Wise is the former editor-in-chief of Take One: Film in Canada, as well as an occasional contributor to Northernstars.ca. This review was written for Northernstars when Mr. Wise was a Contributing Editor.