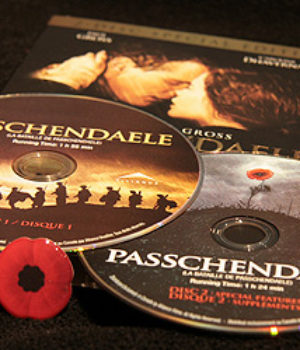 (November 9, 2009 – Toronto, Ontario) The symbolic end of World War One occurred 91 years ago. It is called Armistice Day in many places, Remembrance Day in others. And while the guns fell silent on the 11th hour of the 11th day of the 11th month of 1918 the world has barely known a minute without war since. In a way our failure as stewards of this peace makes recalling this first Armistice even more poignant. Having previously reviewed the movie, Passchendaele when it was released, I set aside a few hours over this past weekend to watch what turned out to be a remarkable two-disc DVD set released on November 3rd by Alliance Films.

The set is worth owning for the Paul Gross feature itself. It has won the Genie Award for Best Picture of 2008, and was recently named Best Feature by the Directors Guild of Canada. But there is so much more.

I assumed the first DVD would hold the movie itself and the second disc would be full of bonus extras. I was surprised to learn when I opened the set that both discs contained extras. 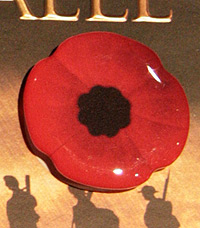 It also contains a free magnet poppy pin, which is a nice touch. Having seen the movie only a few weeks ago, I decided to start with Disc 2.

The second DVD contains seven short films, all produced by the National Film Board of Canada and all but one containing archival footage from the first world war. It also contains the voices of many of the actors of Passchendaele, including its writer-director and star, Paul Gross. Each short is themed and each contains real words from real people taken from their letters home. Woven together each provides depth to the much broader story of World War One, trench warfare, and Canada`s role in the war and our place in the world at that time.

I learned in a short titled Nurses at the Front, that a young woman, a Katherine M. MacDonald was the first Canadian nurse to die in the war. There would be others. It took me by surprise. Having heard her words in letters home to her family, she wasn’t a character in a movie but a real person. And then a bomb hit the tent where she was caring for others. Almost all of these shorts are like that. Surprise tidbits of information expanding my knowledge of a war I thought I knew. In another short, young men in uniform parade down Metcalfe Street in Montreal and turn onto St. Catherine. I wondered if one of them could have been the grandfather I never knew.

There are two short films which depart from the format, but are themselves excellent. One is very short, more of a slide show of images taken during the making of Passchendaele by the award-winning photographer, Farah Nosh. The other is a highly personal monologue by Paul Gross on the subject of Remembrance.

The extras on the first disc include some of the trailers and TV commercials produced to support the release of the film. Then there is the extended documentary, The Road to Passchendaele.

At its heart The Road to Passchendaele tells the story of how the film got made, but like the DVD set itself, it also offers so much more. There are 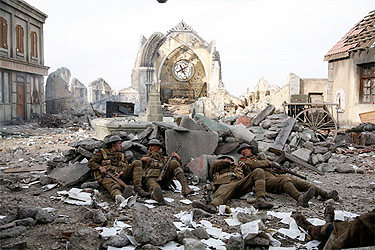 the obligatory scenes of makeup being applied, and the film`s armourer talks about how dangerous blanks can be, and there are bits and pieces of what it`s like to work with a director who is also an actor in the film, but interspersed are insights into military life, the battle of Passchendaele, the story of the real Canadian soldiers who fought there and why that battle was so important to the course of the war. We also see acres of Alberta being bulldozed into the hellhole that awaited the young men who were so anxious to serve their country.

We also see some of the young men who are serving their country now. Extras in the battle scenes, they play at being movie stars in off-set moments. When they learn that yet another Canadian has died in Afghanistan they name their small makeshift camp in his honour. A reminder that in this pretend battleground under the hot Alberta sun, the reality of war is never that far away no matter where in the world it might be taking place.

As stated earlier, owning your own copy of Passchendaele is reason enough to add this DVD to your library. It is one of the best movies ever made in Canada and we were saying that long before it started to win awards. But with this special edition two-disc set, you have a chance to learn about one of the most important moments in the history of our nation and learn it from people who really know how to bring history alive. If all Canadian history was taught this way we’d probably have a lot more history majors, and maybe a lot fewer wars.

Back to the Cast & Crew of Passchendaele.