Home Actors How They Have Changed by Mary Pickford

(April 8, 2016, Toronto, Ontario) – Back in 2010, the Northernstars Collection had the opportunity to bid on a magazine originally published in April 1916. While the cover features an exceedingly beautiful illustration of Canadian-born silent movie star, Mary Pickford, what attracted our attention was the lead article: How They Have Changed, Mary Pickford’s Views of Motion Pictures.

The popular movie industry had been in existence for about 20 years when this article was published, and making movies in California had started just six years earlier when Pickford and other players traveled from New York with D.W. Griffith to make some of the first films shot partially in the state including Ramona, and the very first film, In Old California, to be shot entirely in that state. Talkies were still some way off, yet the industry was changing.

We originally posted this article back in 2010 but now, exactly 100 years later, we thought it was worthwhile to draw attention to this piece again. A full century after it first appeared we can look back and read what The World’s Sweetheart, Mary Pickford, thought about those changes. Below the article’s banner were the words, “MISS MARY PICKFORD the idolized star of the Famous Players Company, has approved the following article as being in corroboration with her own personal views of motion pictures.”

Northernstars is pleased to present the complete original article by Lloyd Robinson as published in Picture-Play Magazine. Note: We have not changed the American spelling. 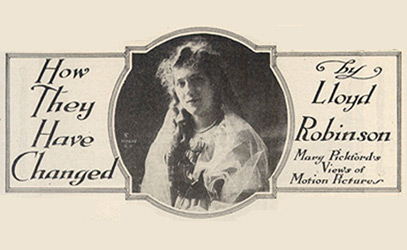 Nowhere is the tremendous progress of the motion picture more strikingly reflected than in the audience which crowds the photoplay theater today. In the short span of years which measures the life of this giant industry, the motion picture theater itself has grown from the corner grocery store to the palatial establishments which one finds in the heart of the theater district of every great city in the country.

But the theater is simply an indication of the character of its audience, and the audience, in turn, is an index of the quality of the films which are to be found on the screen. For, as in every other walk of life, a man is known by the company which he keeps.

In the days of not so long ago, the film enthusiast was lured into a gaudily bedecked little theater of negligible ventilation, which, in nine cases out of ten, was a converted store. When he had climbed over two or three disgruntled citizens, and found an unoccupied seat, if he was at all sensitive, he automatically took stock of his surroundings.

And what surroundings they generally were! To his left, there would probably sit a man of pungent Latin extraction, whose love of self-betraying vegetables was annoyingly apparent. On his right there sat, perhaps, a squalling infant, who preferred to place his feet in the visitor`s lap rather than that of the totally unconscious mother. Fate would generally place our enthusiast immediately in front of a pair of sight-seeing shopgirls, whose audible enjoyment of their chewing gum was only interrupted by such erudite remarks as “Ain’t it grand,” “Some dress that,” or “Pipe the eyes on that guy, Josie.”

Above the chorus in infantile wails there arose at times the violent protests of a helpless piano, which seemed to be lifting its strident voice in protest at the manhandling it was receiving from a heartless brute.

Or, if our enthusiast went to a vaudeville theater to seek amusement, he suffered equally, if not similarly. At the end of the stage portion of the performance, there was a stampede of those who seemed to make it a point of never being caught in the act of looking at the “shiftin’ pichers,” as they were eruditely called by one devotee. If our enthusiast determined to see the films, despite all comers, or goers, he generally drew his feet under him after the third or fourth person had trod upon them, and then began frantically dodging back and forth in a wild endeavor to catch at least a fleeting glimpse of the screen between the scurrying forms of the departing spectators.

Then, just as something of unusual interest appeared on the screen, some large woman, with a plume-bedecked hat, would surge up out of her gallery seat, and the picture would be obscured by the shadow of her finery. By the time the woman had moved, the interesting scene was gone, and he found even his own determination baffled.

How different the situation is today, when there is scarcely a big theater in any city that has not been given over to motion pictures at one time or another. The palatial Strand Theater in New York, with its seating capacity of over three thousand, is a striking example of the tremendous upward step which silent drama has made within a very few years. It is one of 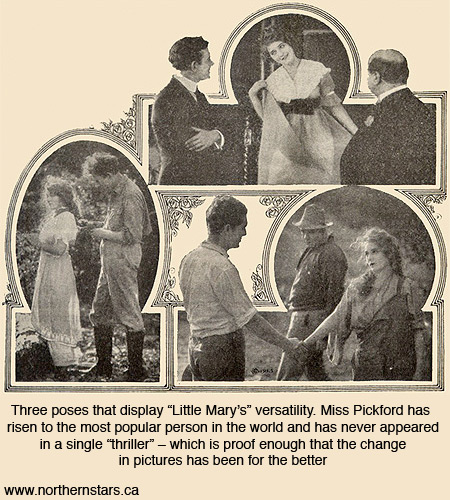 the most beautiful theaters ever built in America, and it was erected for the sole purpose of exhibiting motion pictures. The Strand, however, is not an exception to the rule of devoting great houses to the newer form of amusement, but is rather typical of what is being done all over the country.

The Progress of the motion picture, measured by the architectural development of the theaters, has a parallel in the history of the advancement of the quality of the productions. This, strangely enough, has its counterpart in the development of the modern stage drama within the last twenty-five years.

There are still many who will remember such thrilling stage productions as the Indian dramas, “The King,” “Across the Continent” and others, in which Buffalo Bill and some of the celebrated scouts appeared. Next there came a deluge of thrillers, depending chiefly upon mechanical ingenuity for their effect: “A Ride for Life,” “The Still Alarm,” “Ninety and Nine,” and others of that ilk, which introduced the fire engine, locomotive, and other startling things in the role of props.

Next came the spectacular offerings, military plays that filled the stage with troops and horses. “The Drummer Boy of Shiloh,” “Shenandoah,” and others too numerous to mention held the boards. Then there followed the society dramas, such as “Zaza,” “Iris,” “Sold,” “The Mummy and the Humming Bird,” “Bought and Paid For,” “Bella Donna,” and hundreds of others.