Home Actors How They Have Changed – Page 2

It will scarcely be necessary to trace the parallel for any motion-picture follower, for he will see in this very brief sketch of the stage development an almost exact replica of the story of film. Biograph, Edison, and the other early-day companies flooded the screen with Indian films, and then, as trick photography became more and more thoroughly understood by the camera men, they used all sorts of “effects.” Realism ever has been one of the great assets of the motion picture, and this fact was used to the utmost advantage by the producers. The Civil War burst forth on the screen in all its glory, and the actor dead littered the fields for miles around.

Then the next phase of the story was the “drawing room” drama, which reached its culmination with the introduction of adaptations of many of the great stage dramas, some of which have already been enumerated. Though there are some society plays produced upon the screen in the early days of the motion picture, the thrillers and “stunt” pictures were so greatly in the majority that it was not until 1912 when the Famous Players Film Company inaugurated the first feature program devoted to the introduction of stage stars and adaptations of theatrical successes, that dramas of this character became a potent factor in the motion-picture industry.

Today, they are in the great majority with producers in general, the African picture and other exotic settings being in the minority.

Another marked tendency away from the old order of things is the transferring of many of the death-defying thrillers from tragic and adventurous stories to comedies. The comedian today must needs be a combination of india-rubber man, clown and bombproof structure.

In the “old” days, if one may apply such a term to an industry so young, the thrilling stunts were done by brawny heroes, or little slips of girls, of whom nobody had ever heard until they made their leaps through space–and into ephemeral popularity. There were many of these girls who became stars, through their daring rather than through their histrionic ability. One of the notable exceptions to the general rule was Mary Pickford who has become the foremost of film stars without ever risking her neck in any of these frantic films.

The remarkable personality of Miss Pickford, together with her previous stage training, made it unnecessary for her to enter into this suicide race. Though Miss Pickford is essentially a film star, as against Marguerite Clark, Geraldine Farrar, Pauline Frederick, Madame Petrova and others who have deserted the stage for the screen, after building up great reputations on 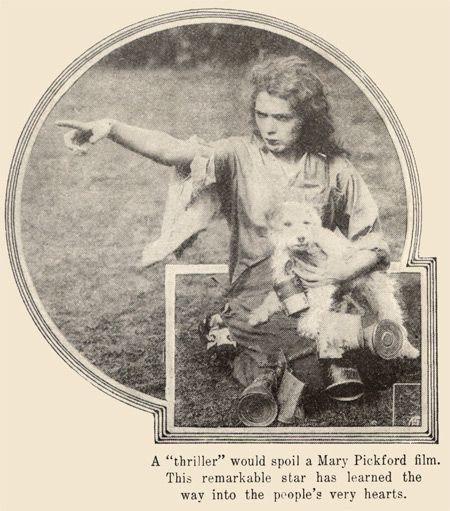 the former, her progress on the screen has been marked by performances of exactly the same type a those in which her confrères have been starred. That is, they are comedies and dramas of the so-called society type, which have been adapted from stage or book, or stories which have been written expressly for the individual.

With the possible exception of an aeroplane flight, which she made in California during the taking of “A Girl of Yesterday,” and which it was not at all necessary for her to make so far as the actual film was concerned, since the use of a substitute would never have been detected, Mary Pickford has never starred in scenes where sheer physical courage predominated all histrionic requirements. It is, perhaps, due to this fact to a degree at least, that Miss Pickford has continued to hold her prestige while many of the girls who were considered great film favorites a few years ago have faded into comparative inconspicuousness.

A very simple explanation of the failure of these exponents of the thrill in motion pictures to hold sway undoubtedly lies in the fact that the public has come to suspect the authenticity of many of the feats which appear on the screen. When the old trick picture was at its height, and the public received each new trick and each new thrill with a “How do they do it?” it was inevitable that this question would tempt many writer to give answers to the inquiries.

The public wanted to know – why not capitalize the marketability of such stories and tell it? So there appeared in magazines of all kinds and sizes, articles which explained detail, with profuse illustration, the exact methods by which many of the effects were obtained. It was shown that the heroine did not really pick the child up off the track, as the rushing express train bore down upon her, but that the whole process was reversed, and that she actually laid the child on the track as the engine backed away.

The agile gentleman who nimbly crawled up the side of the house, to the amazement of the audience, was shown to have crawled safely across a studio floor on his hands and knees upon a huge piece of canvas, which was painted to resemble the front of a huge building. The daring leap from the cornice of one skyscraper to the top of the adjoining building was shown to have been a very commonplace jump, rendered perfectly safe by the fact that the connecting roof between these apparently separate structures was just out of range of the camera. With this concealed, the effect was that of a yawning chasm, and the distant view of the street confirmed the impression of towering heights, whereas the only possible danger was that of a sprained ankle, if perchance the jumper missed his footing and fell to the connecting roof a few feet below him.

Then the matter of substituting or “doubling” extras for the stars in difficult roles was explained thoroughly, and so many instances were cited of cases where doubling had been reported to, that the canny ones proceeded to shake their heads wisely every time a star turned her face away from the camera. It was a sure sign that someone was doubling! They knew, because they had read it all.