Over the course of his long career, Gordon Pinsent has acted in the theatre, in films and on television. He’s worked in most parts of Canada, the United States and even Greece. Yet on July 12 1930, it’s almost certain that Steve and Flossy Pinsent never imagined, while gazing into their sleepy newborn’s eyes, that he would grow up to become a Canadian icon – one who is recognized wherever he goes.

It nearly didn’t happen. When he left his native Newfoundland at 17 years old, his hopes were high and his sights were set on a dazzling acting career, but Pinsent’s lack of experience stood in the way of his dreams. He had to support himself teaching at the Arthur Murray Dance Academy when he wasn’t working as a commercial artist or portrait painter.

His proverbial “big break” came at the Winnipeg Repertory Theatre when the owner noticed how intensely Pinsent was watching a performance. Intrigued, he invited him to read for a part, but when he offered him a small role, Pinsent declined. He wanted to play the lead. Somehow, the aspiring actor persuaded the owner to give him a chance. He debuted as Sebastian in Shakespeare’s Twelfth Night. The rest, as they say, is history.

As illustrated in his determination to nail down the role he wanted, it’s clear that one of the secrets of his success is that he refuses to admit that there’s anything he can’t do. For his first series, The Last of the Mohicans, his role demanded that he be expert at riding a horse. Pinsent barely knew one end of a horse from the other. But when the director asked him if he could ride, he shot back, “Western or English?” At first, Pinsent had a lot of trouble staying upright in his saddle, but eventually, he got the hang of it.

Pinsent’s Newfoundland roots inform many of his roles. Some of his most memorable performances have been based on characters he grew up with – like Hap Shaughnessy, the 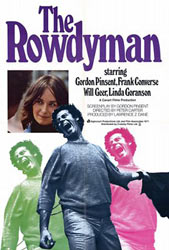 compulsive liar on The Red Green Show, a role Pinsent took on as a favour to his friend, the series’ creator Steve Smith. At the time, the show needed a ratings boost, so Pinsent offered to work for scale, creating a character that became increasingly popular as his tall tales got taller and more improbable. Other television roles have included Robert Fraser in Due South, a phantom who can’t seem to stop giving his son advice; Walter Franklin in Made in Canada; and Duff McArdle, owner of the hockey team in Power Play. One role close to his heart – and acclaimed by the critics – was the Newfoundland newspaperman he played in The Shipping News.

But there’s more to Gordon Pinsent than his ability to act. He’s also an accomplished writer. He wrote both the novel and the screenplay for The Rowdyman, which was later turned into a musical. Another novel, John and the Missus, was adapted for the screen and released in 1986. He based his play, Corner Green, on life in his hometown of Grand Falls. In 2012 he made his songwriting debut with Down and Out in Upalong, a CD of his poetry set to music by Greg Keelor of Blue Rodeo and Travis Good of the Sadies. Pinsent is also known for his voice, appearing in many CBC Radio plays, and he lent his voice to the radio series Gordon Pinsent on Canada, which aired across Canada during Canada’s 125th birthday in 1992.

Not content to rest on his abundant accomplishments, in 2005, at the age of 75 he embarked on yet another project near and dear to his heart. Heyday! is a two-hour made-for-television movie loosely based on his experiences working as a busboy at the famed Airlines

Hotel in Gander, Newfoundland, a stopover for U.S. servicemen and the Hollywood stars sent to entertain them. Set near the end of World War Two, he not only wrote the screenplay but directed the movie as well. He also wrote songs for the project, something he has done before, and he taught the cast how to do period dances. The cast included his daughter, Leah Pinsent. He was also busy as part of the cast of Away from Her (2007) from actor/director, Sarah Polley. The role brought him a Toronto ACTRA Award for Outstanding performance in February of 2007 and a Genie Award in early 2008. In his acceptance speech he credited much of his success to his late wife, Charmion King who had passed away in January of 2007.

So far, Gordon Pinsent has been awarded the Order of Canada, three Genies, two ACTRA awards and in 1997, the Earl Grey Award for lifetime achievement. When he’s not acting or writing, he’s active in charitable works for Toronto’s Hospital for Sick Children and the Easter Seals telethon.

To learn more about Gordon Pinsent, his autobiography By the Way should be considered a must read. It reveals much about his personal life as well as his experiences in the world of entertainment.

This biography is Copyright © 2007 and may not be reproduced without prior written permission. For more information about copyright, click here.