Polaris a “Must See” Film
by Ralph Lucas – Publisher

(July 11, 2022 – Toronto, ON) When the 2022 Fantasia Film Festival launches on July 17, the feature that has pride of place as the Opening Film is the Canadian production, Polaris. This is fantasy fiction at its best with a story that’s tight, dramatic and cinematically both beautiful and intense. It also has some very visible messages both in its setting and casting. 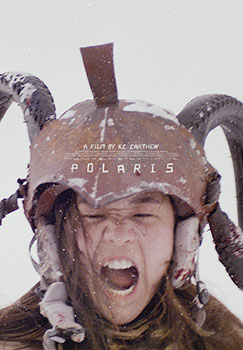 You may have to be of a certain age to remember the 1981 film Quest for Fire, which was based on the 1911 Belgian novel by J. H. Rosny. I mention it because that film, a prehistoric fantasy-adventure that costarred Everett McGill, Ron Perlman, Nameer El-Kadi and Rae Dawn Chong, used a language created by the novelist Anthony Burgess. Polaris also has its own language and like the original release of Quest, there are no subtitles. You don’t need them. The story plays out in vivid detail on the screen. While hearing the characters speak gives each scene a certain tone, and the music adds to the tension, it is the full impact of the visual story-telling that is remarkable. Putting aside the similarity of an invented language, there are major differences between the two films, the most obvious being Quest was set some 80-thousand years ago, Polaris is set in the future, in the year 2144. Also, the cast of Quest was mainly male, the cast of Polaris is universally female.

The basic story is contained in the synopsis. The action centres on Sumi, a young girl raised by Mama Polar Bear who narrowly escapes capture from a brutal Morad hunting party, only to become a hunter herself seeking revenge. Set in the sub-arctic, global warming is not an issue. As the Fantasia page for this film states, Polaris is…“An all-female eco-action fantasy set in a frozen world.”

Polaris is an ambitious 2nd feature from Kirsten Carthew (aka KC Carthew) and should reach a large audience beyond just the fans of fantasy film when it comes out of festival distribution and into general release, hopefully this fall. We have just added the film to our database and the trailer to our ever-growing Vimeo archive of movie trailers, but we still have to add the crew and cast links and hope to have that done by time Fantasia opens. Click here to watch the trailer and for more about Polaris.

No release dates have been announced but I’m filing this one under “Must See.”