Critics have praised Léa Pool for the emotional impact and magnificent beauty of her films, and they have won a number of international awards. In 1979, she wrote, directed and produced Strass Café, a medium-length film, which won awards in four festivals. In 1984 Pool wrote and directed her first feature film, La Femme de l`hôtel which not only was selected to be at the Forum in Berlin in 1985, but went on to win seven awards, including the international press award at the World Film Festival, and the best actress award for Louise Marleau at the Toronto Genie Awards Gala. In 1986, she shot Anne Trister, which won numerous awards, among them, the Prix du Public at the Festival des Films de Femmes de Créteil, the critic`s award at the Trola Festival (Portugal) and, in Toronto, the Genie Award for best cinematography.

In 1988, she adapted Yves Navarre`s novel Kurwenal and made the film A corps perdu. It too garnered international acclaim and screened in no less than 34 international festivals winning Première magazine`s first prize at The Festival de la Francophonie de Namur (Belgium), the award of excellence at the Atlantic Film Festival in Halifax, and was selected for official competition in the Venice Festival, The World Film Festival and the Chicago International Film Festival. Pool`s next project, the 1991 feature, La Demoiselle sauvage, based on the short story by Corinna Bille, won the prix Super Écran for best Canadian feature film; the award for best artistic direction (for cinematography) at the World Film Festival; as well as the award for best direction at the Festival du Cinéma Francophone de Saint-Martin (Antilles). Following La Demoiselle sauvage, Pool wrote and directed Mouvements du désir in 1992/93, which was a finalist in eight categories at the Genie Awards, and was screened at The Sundance Film Festival. She created a vignette entitled Rispondetemi for Montréal vu par… in 1991. Emporte-moi was her sixth feature film and was selected for the official competition at The Berlin International Film Festival and won a Special Prize from the Ecumenical Jury in 1999.

Pool has also directed several documentaries. She received the Gold Plaque award for Hotel Chronicles at the Chicago International Film Festival. Gabrielle Roy was also a made-for-television documentary and like most of her work, it too won special recognition. It was awarded the Best History and Biography Programs Award at the 19th Rocky Awards of the Banff Television Festival in 1998 as well as receiving a Gemini Award for best documentary, also in 1998.

Léa Pool made her first English-language film with the boarding-school romance Lost and Delirious, based on a novel by Susan Swan, and then shifted to Costa Rica to shoot her next film, the family adventure The Blue Butterfly, starring Pascale Bussières and William Hurt.

Early in 2007 came the welcome news that there would be a new film from Léa Pool in the not too distant future. Originally titled, Pieds nus, the film was released in May of 2008 as Maman est chez le coiffeur. It explores one summer in the life of a 12-year-old girl named, Élise. With her mother abandoning the family, herfather unable to assume his responsibilities and her brothers in trouble, Élise is left to learn life`s lessons – symbolic and otherwise – on her own. The story is almost typically Pool. Asked once to talk briefly about the subject of youth, Pool responded, “All ages of life are represented in my films, but the child and the adolescent are the motors. My desire to make films has come from an adolescence that wouldn’t end; it`s a side of infancy that doesn’t want to become adult. From film to film, I’ve reflected on characters between childhood and adolescence, until the moment comes when I decide to make a film about them.” 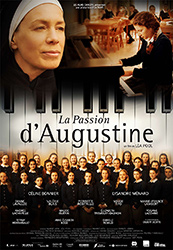 Her 2011 documentary Pink Ribbons Inc explored the business of raising funds to fight breast cancer and how very little of that money actually ends up where it is needed most. Her 2015 film La passion d’Augustine centres on Mother Augustine, the principal of a small school that has won many prizes for piano who tries to share her passion for music with her students. When her niece is left in her care, she meets a new prodigy. But when the Quebec government introduces a public education system, the school’s future is threatened. Written by Marie Vien and Léa Pool, the film charted in the Top 5 box office earners following its release in Québec in March of 2015.

Also in 2015, Léa Pool attended Toronto`s Female Eye Film Festival where she was named their Honourary Director. Before taking part in a highly illustrative Q&A, Pool read a brief, passionate speech about the need for more female filmmakers, a position we at Northernstars.ca heartily endorse.

This biography is Copyright © 2015 and may not be reproduced without prior written consent. Click here for more information about copyright.