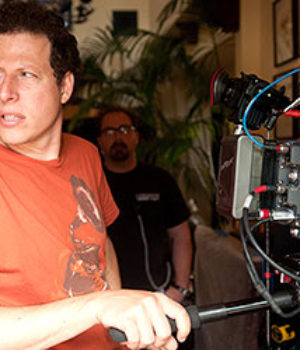 Arie Posin was born into a family that was obsessed with the cinema long before he even appeared on the scene. His father Michael was a film director (graduate of the renowned VGIK film school in Moscow, studying alongside Andrei Tarkovsky and Andrei Konchalovsky, among many others), while his mother Rimma, herself the daughter of a well-known (and famously persecuted) Yiddish poet, was pursuing a career as a screenwriter. The young couple soon ran afoul of the Soviet regime due to their critical views of life under totalitarian rule; they were branded anti-communist agitators, and silenced by government censors. Eventually, under great risk, they appealed for help to western journalists and artists and the world film community at large. The pressure on the Soviet government was enough to see the heavy gates of the iron curtain parted just enough for the young family to escape to Israel. Posin was born one month later in Jerusalem.

As with many immigrant stories, there were many subsequent moves (nearly every year for over a decade) always in search of financial survival and creative freedom; to Canada for many years, and eventually to the United States. By the time Posin reached college, he’d made the decision to pursue film directing as a career for himself. He was accepted to the USC School of Cinematic Arts on the recommendation of Billy Wilder, who would later watch and mercilessly critique Posin’s student films. After graduation, on Wilder’s advice, Posin set off to travel again, spending over a year in Ireland, France, Spain, and Israel. He returned with the experience of the road under his belt and a head full of steam under his hood, eager to make movies.

Posin soon wrote and directed an award-winning short film, Over My Dead Body, which led to him meeting Zac Stanford, an aspiring screenwriter. Together they collaborated on The Chumscrubber which Posin also directed, starring Jamie Bell, Glenn Close, Carrie-Anne Moss and Ralph Fiennes. The Chumscrubber premiered at the Sundance Film Festival, and later provided Posin with the opportunity to accompany the movie to the Moscow International Film Festival where, speaking the fluent Russian his parents had insisted he learn in childhood, he was able to reconnect

withrelatives, the film community, and long-lost family friends. The Chumscrubber went on to win the Audience Award for Best Film at the festival.

His inspiration for the 2013 film, The Face of Love came from a real event. "It was about five years after my father passed away," recalled the writer-director. Posin had a visit from a woman who had had an experience while simply crossing a street. "She came over one day and said—it’s almost word for word what Nikki says in the movie—‘You know, this funny thing happened to me today. I was walking across the street and I saw this man coming towards me who was a carbon copy of your father. I had my glasses in my hand, and I started to put them on and then I didn’t put them on.’

"I asked why not, and she said, ‘I knew it wasn’t him. I knew it wasn’t your father, but I was shocked. I was standing in the middle of the street and to see this man coming towards me… it just felt so nice. It felt like it used to.’ And that moment stuck with me. I started thinking about it, dreaming about it, even. And that eventually led to this whole story. What if she had tried to find this man again? And what if they met? What would those conversations be like? And what would happen if they were to fall in love?”

When Posin shared the story with producer Bonnie Curtis, who had produced his debut feature, The Chumscrubber, her response was unequivocal. "I told him, ‘You have to write that. You absolutely have to write that,’" said Curtis. "The story really caught me. I thought it was such a wonderful idea."

Posin now lives in Los Angeles with his wife and daughter.

The photo above and the poster for The Face of Love are Copyright © 2013 by IFC Films. Used with permission.

This biography is Copyright © 2014 by Northernstars.ca. Click here for more information about copyright.