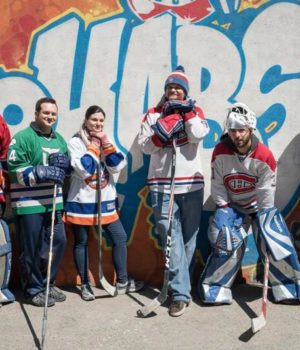 (April 13, 2017 – Toronto, ON) There is a slew of Québec shorts and features making its way across the country thanks to the efforts of an organization known as Québec Cinéma. Its mission, simply, is to promote Québec’s cinema and its artists and professionals to people in Quebec and around the world. Next week the “Tournée du cinéma Québécois” makes a stop in Toronto in partnership with the local film festival, Cinéfranco. The three day program at the Carlton Cinema will give Toronto movie goers a chance to see six feature films and a program of shorts by indigenous filmmakers. Some of the screenings will be attended by cast and crew members.

Screenings begin on April 21 at 5 p.m. when the Programme Premières Nations, will show 14 shorts produced by Wapikoni Mobile and the National Film Board of Canada (NFB). The works reflect indigenous filmmakers’ deep passion for storytelling. The same day at 7 p.m., there will be a special screening of Ça sent la coupe by Patrice Sauvé, with actresses Émilie Bibeau and Julianne Côté in attendance. The film, an adaptation of a novel by Matthieu Simard, opened the 2017 edition of the Rendez-vous du cinéma québécois.

The next day at 2 p.m., festivalgoers will get to see Fulvio Bernasconi’s drama, Miséricorde, followed at 4:30 p.m. by La chasse au collet, a psychological thriller by Columbarium director Steve Kerr. The screening will be followed by a Q&A with

actress Julianne Côté. At 7 p.m., there will be a screening of Iqaluit, the latest from director Benoit Pilon, who will be in attendance.

The Tournée wraps on April 23. At 3 p.m., the winner of the coveted Prix Gilles-Carle at the Rendez-vous du cinéma québécois will screen. It’s titled Prank and its from director Vincent Biron. Lastly, the program wraps at 5:30 p.m. with the infamous Bougon clan’s big-screen debut, Votez Bougon, directed by Jean-François Pouliot.

As part of the Tournée, Québec Cinéma also organizes special cinematic experiences for young people through its school-based activities. For this Toronto visit, the Tournée will hold two animated film production workshops for pupils at Gabrielle-Roy elementary school.

Presented in collaboration with Radio-Canada, the Tournée du cinéma québécois screens Quebec-made films from coast to coast to coast, making it the largest Canada-wide promotional activity for the province’s cinema. Through this tour, Québec Cinéma provides a high-profile showcase for artists and filmmakers, including exceptional opportunities for audiences and filmmakers to meet. The Tournée du cinéma québécois will conclude its journey with a visit to Iqaluit, Nunavut, in May.