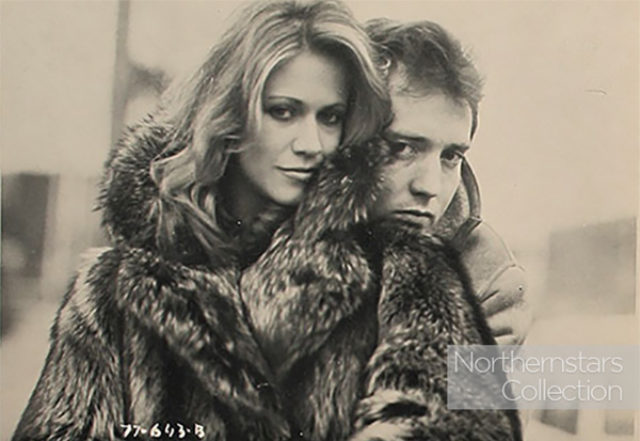 Rabid  – A Review
by Joan Irving

(April, 1977 – Toronto, Ontario) When David Cronenberg isn’t making films, he likes to ride motor­ cycles. Eventually he may make the first Canadian biker film but in the meantime he’s playing out his fanta­sies with horror movies. The latest, Rabid, came out so quickly after Shi­vers and follows so closely the lat­ter’s instinct for the visceral, that we don’t need to ask why this film was made: Cronenherg’s formula for hor­ror paid off with Shivers and it will do so with Rabid.

Need I say that those who saw Shi­vers and put it down (sometimes vi­ciously) will probably put down this film and for the same reasons. The plots are unashamedly similar: a car­nivorous parasite invades a human carrier and spreads, like rabies, through an entire city. But I’m no pur­ist. Like any Girl Guide who has stayed up well beyond curfew at camp to tell horror stories, I would have been disappointed if during Rabid I had done a less thorough job on my fingernails.

There is something about seeing a brigade of garbage trucks on clean-up duty in a quarantined city, a city in which members of the home• guard (dressed in hospital fatigues) are shooting down snarling, foaming fel­low citizens, that is, er, unsettling. In Rabid, Cronenberg seems to be moving in the direction of creating an implied horror – a population gone berserk and turning on itself; if he doesn’t quite carry the subtlety far enough, he at least calls into play more elements than just the grisly evidence of the parasite. Perhaps his greatest achievement in this film is that the parasite, buried as it is in the armpit of the innocent, well-meaning Rose (Marilyn Chambers), rouses not our disgust but our curiosity. That it is also blatantly sexual in form and delivery is the other dimension of the film and lodges Rabid neatly in a fa­vorite Cinepix camp.

But proving himself for Cinepix won’t hurt Cronenberg any more than it hurt Gilles Carle and a couple of other beginning Canadian directors. After all the Sylvester Stallone story, if it is indeed true, doesn’t happen often, and never(?) in Canada.

Rabid is directed with stirrings of style (I think of the eerie final scene). Cronenberg gets a convincing per­formance from Marilyn Chambers who plays Rose with self-confidence and an almost athletic grace, but while Frank Moore is sulking his way through his lead role, the amiable Joe Silver moves in to steal the younger actor’s thunder.

Cronenberg both wrote and directed Rabid. In my judgment, he is not par­ticularly meticulous about either func­tion. There are a few too many unex­plained incidents of plot (was the par­asite introduced accidentally or mali­ciously and where did it come from?) and early in the film there are annoy­ing lapses of continuity (was it a snowy forest the accident occurred in, or a grassy field?). He does, however, develop a strong rhythm and ends the film at a point of tension rather than one of overkill.

Cronenberg was fast on the rebound with Rabid, perhaps too fast, though it seems likely that the film was in­tended to set him up for the kind of projects that will one day carry him beyond the critics’ barbs. There’s al­ways that hope. And for audiences who don’t have such a perspective, a diet of gnashed knuckles and finger­nails can go a long way too.

Also see: The cast and crew of Rabid.

This review was originally published in the April 1977 issue of Cinema Canada and is reproduced here with permission of its publisher.

Louise Archambault: The Ties that Bind